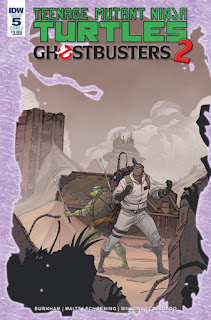 In the garden dimension, the Turtles reunite with the spirit of Tang Shen, their departed mother.  Ray tries to take a PKE reading of Shen, but Winston slaps the meter from his hand and tells him to show some respect.  Shen tells her sons how proud she is of all of them and then thanks the Ghostbusters for not only making this reunion possible, but for being such good friends and mentors to her children.  Feeling the Collectors/Dun drawing nearer, Shen bids her sons farewell and disappears.  As the garden dimension begins to fade away, the Turtles and Ghostbusters open up a portal and return to the Firehouse.  When they get to there, Donatello and Egon hand out the proton weapons and let everyone in on their plan. 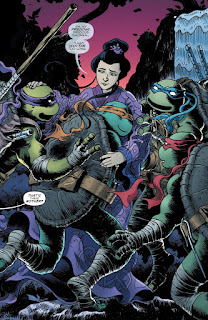 Later, in Central Park, the Collectors/Dun arrive.  Peter approaches them (Egon having calculated their arrival point in advance) and gives them the option to surrender.  Dun laughs and swears that once he has dealt with the Turtles, he will build a trans-dimensional criminal empire.  Peter was just a distraction, of course, and the Turtles get the drop on Dun.  Using their proton weapons, they're able to injure the Dun entities, but they quickly put themselves back together after each blow.  Peter and Winston try to slow Dun down with their proton streams, but he's too powerful.  Eventually, he trashes all the proton weapons and shrugs off the proton streams. 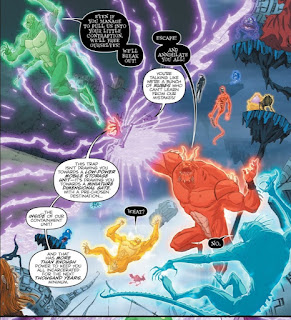 However, it was all just another diversion, giving Egon and Ray time to calibrate the Portal Trap.  They open it and suck Dun directly into the Containment Unit, where the power source is strong enough to keep him from crossing dimensions and escaping.  With the day saved, Donatello laments that it's time they all went back to their home dimension.  Michelangelo is bummed, as he wanted to visit the Ghostbusturtles again. 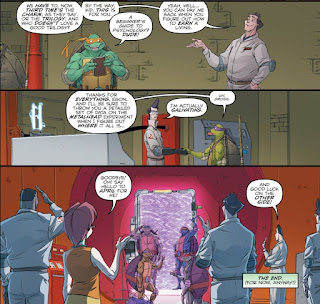 Later, back at the Firehouse, the Turtles and Ghostbusters say their goodbyes.  Leo wishes he and Winston could hang out without monsters trying to destroy them, but Winston says that's just the way things are.  Raph asks Ray if Dun can ever escape from the Containment Unit and he assures him that their tech is airtight.  Peter gives Mikey a beginner's guide to psychology text, encouraging him to study the subject. Donnie promises to send Egon his notes and data on the Metalhead consciousness transference once he finds them.  With all the goodbyes said, the Turtles enter the portal and return home.

*This story is continued from TMNT/Ghostbusters 2 #4.  For the Turtles, the story resumes in TMNT (IDW) #76.

*This issue was originally published with 3 variant covers: Cover A by Dan Schoening and Luis Antonio Delgado, Cover B by Charles Paul Wilson III, and Cover RI by Adam Gorham.

The conclusion to this crossover offered some surprises and also played it by the book, but I think it struck a good balance.  The Collectors/Dun were defeated in exactly the way Donnie and Egon said they would defeat them several issues ago.  Essentially, their plan went off without a hitch and there were no wrinkles in the strategy.

In some sort of way, that might have actually been LESS predictable than the alternative.  In the back of my head, I was waiting for the part where the plan would break down and they'd have to think of a solution on the fly, which is the formula almost every narrative where a strategy is introduced in advance tends to operate on.  The fact that it was resolved precisely how the characters said it would be resolved near the start of this mini kinda took me by surprise, even if it didn't leave me with any shock or awe.

The REAL surprise element instead came in the form of Tang Shen popping up.  It's almost a non sequitur to the plot and serves strictly as a detour for the characters.  Again, I was anticipating Shen to turn out to be some illusion created by Dun to trick the Turtles or whatever, but that wasn't the case.  It was just an opportunity for her spirit to tell her kids how much she loves them and that's it.  The moment doesn't tie into anything else going on in the book, it's just THERE, but it also winds up being one of the better parts of the whole miniseries.

Quite a lot of this mini involves the Turtles dealing with some emotional baggage and getting advice from the Ghostbusters, who serve sort of as mentor figures for them.  Winston helps Leo deal with his responsibility complex, Peter helps Mikey get to the root of his abandonment issues, Ray diagnoses why Raph is so angry and lonely all the time, and Egon and Donnie overcome their survivor's guilt by comparing near death experiences with one another.  There's a LOT of psychotherapy going on in this mini and it almost feels like the reunion with Tang Shen was a reward the Turtles received for getting over their emotional issues.  So in some way, her scene is led into and isn't quite the non sequitur I made it out to be.

An anonymous commentor in my last review also brought up a good point I hadn't considered, that the Ghostbusters are some of the few adults whom the Turtles know and can confide in.  Most of their friends are either fellow teenagers, weird mutants or space aliens.  The Ghostbusters are just normal adults, and while they aren't exactly surrogate parental figures to the Turtles, they do act as mentors for them.  The dynamic was unique, because this wasn't one of those team-ups where both sides acted as equals to one another.  The Turtles definitely looked up to the Ghostbusters as adults and actively sought out their advice, while the Ghostbusters saw the Turtles as extraordinary teenagers with lots of potential, but still teenagers in need of guidance.  A LOT of writers tend to forget that the Teenage Mutant Ninja Turtles are still teenagers and it's always a little weird when the adult characters they meet regard them as contemporaries rather than kids.  While the Ghostbusters don't necessarily treat the Turtles as peers (save perhaps Egon/Donatello), they DO treat them with respect.  It was a very complex dynamic and I applaud Burnham for going that extra mile when a "superhero team-up" style crossover likely would've been ten times easier to write.

You know, I never really understood how that worked.  The science of the equipment in the Ghostbusters universe is that the ghost traps separate the ectoplasmic energy that makes up the ghost from the psychokinetic energy that gives it the power to manifest itself in the physical world.  I always figured the Containment Unit was just this huge vat of ectoplasmic energy where the ghosts, cut off from psychokinetic energy, are incapable of reforming themselves.  So whenever it's depicted as basically being another dimension entirely, I'm always left scratching my head as to where that came from.  Was it an existing dimension that the Ghostbusters hijacked when installing the Containment Unit?  Or did they CREATE their own pocket dimension to store ghosts in?  How fucking BIG is it (it looks endless)?  And if the Ghostbusters have the technology to basically create entire universes, why the hell are they working as exterminators and not just ruling all of reality as the literal gods they have become?

Oh man, why am I even thinking about this stuff?  It's fucking Ghostbusters.  The inside of the Containment Unit looks the way it does because its fun to see cameos from all the previous ghosts they've caught sitting around and sulking.  It's a comic book, it doesn't have to make sense.

Anyhow, TMNT/Ghostbusters 2 definitely upped the game on the first crossover and I loved every page of it.  A little dense with continuity between the two books, which might discourage newcomers, but I think readers familiar with one or the other title will have a blast.  And those who read both will feel extremely rewarded.  They tease a third crossover in the denouement, but I dunno.  It took 25 years to get Ghostbusters 3 (in the form of Ghostbusters the Video Game).  How long will we have to wait for TMNT/Ghostbusters 3?  Hopefully less than a decade.