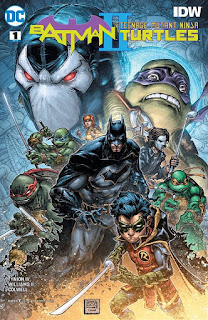 New York City.  The Turtles ride through the subway on Donatello's experimental hoverboards, terrifying a pedestrian along the way.  They catch up to a subway train upon which Karai is doing mortal combat with the Foot Clan Elite Guard.  Evidently, after the Turtles sent the Shredder to prison, a civil war broke out in the Clan between those who would follow Karai and those who would follow the Elite Guard.  Michelangelo swoops in to help her, but Karai prefers to use the Turtles' presence as a distraction to escape (even though they're supposed to be on good terms).  Leonardo and Raphael kick the Elite Leader and another Guard off the train, confident that Donatello will be able to take care of them. 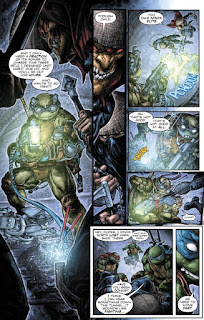 Down the line, Donnie confronts the Elites with a taser gun he's hardwired into the third rail.  The Elite Leader severs the cable powering the gun with a shuriken and then proceeds to trounce Donnie, mocking him for being the weakest of the Turtles.  The other Turtles arrive in the nick of time to save Donnie and take down both Elites.

Gotham City.  A member of the League of Assassins enters the throne room to report to his leader, but is ambushed by Batman and Robin (Damian Wayne).  Apparently, there was a breakout at Arkham Asylum and Batman suspects the League was behind it.  The assassin spills the beans and explains that after Ra's Al Ghul was defeated, the League went into a civil war between those still loyal to him and those who would follow a new master.  The League was behind the Arkham breakout to free their leader and the assassin also lets spill that there is a Lazarus Pit beneath Gotham City that not even Batman knew about. 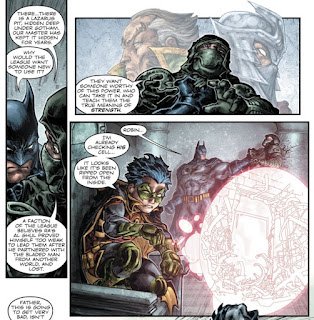 New York City, the Lair.  April and Casey patch Donnie up, but his pride is wounded worse than anything else and he shuffles off to sulk.  Casey reveals he's heard that Bebop and Rocksteady have formed their own third faction of the Foot Clan and begun taking turf away from the Purple Dragons.  April suggests that no one travel alone anywhere until the Foot civil war is finished.

Donnie goes to see Splinter and apologizes that he wasn't strong enough to help his brothers in battle.  Splinter reminds him that strength comes from within, not just from without, and tells him that if it hadn't been for his hoverboards they wouldn't have made it in time to save Karai.  Donnie disagrees, recalling that Batman was both a genius and a skilled warrior.  He decides he wants to seek further guidance from the Caped Crusader and leaves. 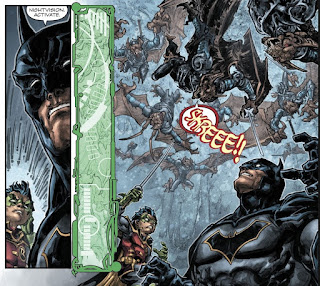 Gotham City, one mile beneath the surface.  Batman and Robin traverse the caves leading to the Lazarus Pit, only to be waylaid by the League's Ninja Man-Bats.  They fight their way through the Man-Bats, but fail to reach the pit in time.  The new leader of the League emerges from the immortality-granting, power-enhancing waters: Bane. 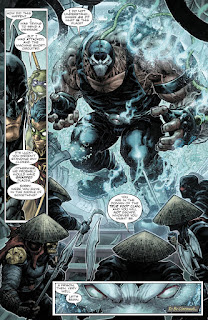 Meanwhile, in New York City, Donnie enters Harold's lab only to find it empty.  He activates the multiverse teleporter and tries to hone in on Batman's genetic signature so he can contact him.  Suddenly, he's attacked by the Elite Guard.  Donnie is knocked into the teleporter as a strike from the Elite Leader activates the machine.  Donnie finds himself in Bane's place in the caves beneath Gotham City, left to make an awkward excuse to Batman.  Bane, meanwhile, has taken Donnie's place in Harold's lab and is ready to challenge the Elite Leader for dominance of the Foot Clan.

*Just as a reminder, this miniseries, like the one before it, features versions of the Turtles and Batman "inspired by" their IDW and New 52 continuities, but not actually being part of either canon.

*The Ninja Man-Bats first appeared in Batman (Vol. 1) #655, albeit under Talia Al Ghul's League of Assassins, as Ra's was out of the picture at the time.

I mentioned in the TMNT/Ghostbusters 2 review, but second crossovers are usually better than the first.  Yeah, they lack the gravitas of the first encounter between characters, but the plot always moves along so much faster and with fewer predictable story beats.  We don't have to go through introductions, characters explaining how and why they got to each other's stomping ground, none of that awkward "first they fight, then they team-up" stuff... We're ready to roll right from the getgo.

And this issue certainly does get rolling quickly.  The opening bit with the pedestrian calling 911 and describing his frightening encounter with "demons" featured some labored dialogue (he was being very flowery for just some guy calling the cops), but it set up a pretty great two-page spread.  There IS a lot of exposition to establish the initial conflict on both sides of the multiverse, but we the readers have to get appraised of the circumstances SOMEHOW.  And the aforementioned exposition is layered over some excellently kinetic fight scenes, so I don't think all the back story will bore you.

The "inspired by" aspect of the continuity, wherein these Turtles take their character and plot assets from the IDW comic but aren't actually canon to that comic, is very much on display here.  You can see where Tynion took the concepts he wanted, like Harold's lab, Casey's dad being a drunk, or Bebop and Rocksteady being part of the Foot Clan, but you can also see where he diverges.  Karai being on such good terms with the Turtles feels more like a Mirage throwback than anything in line with IDW.

And speaking of Mirage throwbacks, we're getting a sort of double "City at War" here, with the Foot Clan civil war being mirrored by the League of Assassins civil war.  A clever little mechanic that helps to put both protagonist teams in similar circumstances they can sympathize with.

The heart of this story looks to be Donatello dealing with inadequacies regarding his strength.  He gets shit on a LOT in this issue and I imagine Donatello fans probably aren't going to take this opening chapter very well.  It does seem to stress a little too hard that Donnie's a weakest-link liability to the team, with everybody but Splinter trashing him or absentmindedly putting him down.  Honestly, Donnie being a lesser fighter than his brothers has never really been an issue anywhere else, as he always has his gadgets and clever intellect to pick up the slack, but this IS a continuity unto itself.  So maybe Donnie just kinda sucks in this universe.

On the Batman side of things, the Dark Knight gets a little less real estate in this opening issue, but Tynion tries to have a little fun with the setup of the League's new leader.  It's staged like it's supposed to be a surprise, and it would've been a cool one, too... But then they had to go and plaster Bane all over the cover and namedrop him in all the solicits and previews.  So much for that.

Bane's a character I like, but he's actually a lot like Karai in the Mirage comics in that writers struggled to pen him a worthy followup after his excellent debut storyline.  Bane kinda peaked early in "Knightfall" and while there have been some pretty good Bane stories since then (I liked him in Secret Six), his introduction was too good to be topped (again, like Karai and "City at War").  He doesn't get much to do or say in this issue except whine about hating prison, so I'm sure he'll turn around in the next chapter.  I wonder if he'll mention that time he got mutated into an elephant?

Oh yeah, and the Ninja Man-Bats.  It's been 5 or more years since I read Grant Morrison's run on Batman; I'd forgotten all about those guys.  But they remind me why I like how these crossovers have taken a sandbox approach to continuity rather than try to rigidly fit into an existing canon structure.  Tynion is free to pluck toys from wherever he wants in the Batman canon; we've got a Batman that looks like his New 52 counterpart, a Bane that stepped out of the '90s, and the Ninja Man-Bats from Morrison's run.  And the same goes for the Turtles, which I talked about a few paragraphs ago, getting characters and concepts from both the IDW and Mirage franchises.  And maybe a bit of Fred Wolf/Playmates, too, if those hoverboards were supposed to intimate the Cheapskates.

Batman/TMNT II is already starting strong.  Batman gets sidelined a bit in the opening chapter and Donnie is way more useless than he should be, but there's a lot of fun promise in the conflict and the art/colors of Williams and Colwell are as amazing as they've ever been.