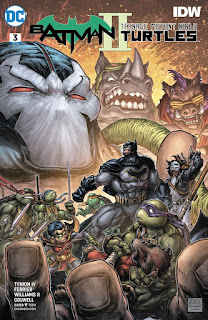 Down in the lair, Michelangelo beats Robin at video games and the little brat throws a fit, venting his frustrations on Donatello, who already feels guilty over leading Bane to their universe.  Raphael and Robin get into an argument and Donnie leaves to go sulk some more.

At Foot Clan HQ Batman, Splinter and Leonardo peek in through a skylight.  They see Bane coming down from his Venom high and Batman suggests that in two hours his withdrawal symptoms will be at their peak.  Even then, they will need the whole team to bring him down, so they head back to the lair to gather everyone. 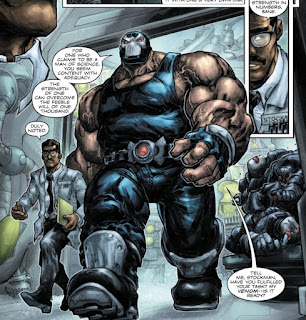 It was all a ruse, however, as Bane watches them leave and, although he is truly in pain, he is actually in control of it.  Baxter Stockman then reports that the synthetic Venom is coming along and he has moved it on to "human" testing.  Next to a pile of dead Foot Soldiers, Bebop and Rocksteady are being hooked up to the machines to pump them with the steroid. 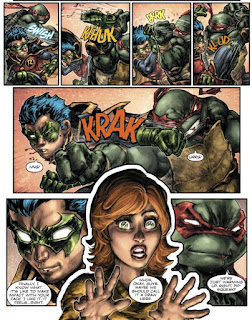 In Donnie's lab, he's still pouting and April's words of encouragement do him little good.  She suggests that she help his brothers and Casey with a very important job.  That job winds up being referee in a sparring match between Raph and Robin.  The two hotheads take it too far and begin wailing on each other with serious force.  Before a winner can be declared, Batman and the others return and the whole gang deploys to go fight Bane.

They storm Baxter's lab and he laughs that the heroes have no idea what they're dealing with.  Donnie finds a huge vat of synthetic Venom and analyzes it, learning that Stockman has not only synthesized Venom successfully, but has improved it with the inclusion of mutagen.  The Venom-enhanced Bebop and Rocksteady plow their way into the lab and in the chaos, Baxter gets doused in mutagen.  Some of the flies that had been buzzing around the dead Foot Soldiers had left their DNA on him and he is turned into a fly-man. 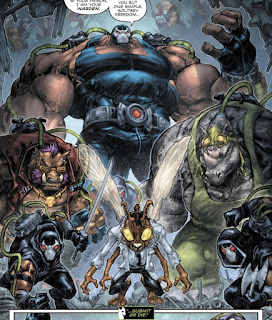 Bebop and Rocksteady are soon backed by the army of Venom-enhanced Foot Soldiers as well as Bane, who has used the mutagen-Venom to make himself really super fucking big.

*Batman mentions the time he was hooked on Venom, which happened in Batman: Legends of the Dark Knight (Vol. 1) #16-20.

*Bane mentions his origins on Santa Prisca, which were seen back in the Batman: Vengeance of Batman one-shot.

*This issue was originally published with a 6-page preview of The Terrifics #1 from DC Comics.

We're halfway through the Batman/TMNT II miniseries and though I'm loathe to say it, I think this one's kinda just limping its way through the motions.  Superficially, the book LOOKS exciting thanks to the excellent art and colors from the Williams/Colwell team, but in terms of substance this mini has been very predictable and I'm getting a little bored with it.  The novelty of seeing Batman and the Turtles working together has already expired (this is the third crossover between the franchises, actually) and so a substantial plot is really needed to maintain the draw.  But if Tynion had brought his A-game to the first mini, I think this is more his C-game.

The Turtles and Batman fall into a stupidly obvious trap; Superfriends Batman and the Fred Wolf Turtles wouldn't have been fooled by this one.  If anything, all the heroes are looking really BAD in this mini.  Batman idiotically falls for Bane's little show where he pretends to be having withdrawal symptoms and doesn't leave Leo or Splinter behind to keep watch over Bane while he fetches the rest of the team.  Robin and Raph punch each other into a bloody pulp over a video game minutes before they know they'll be leaving for a life or death mission where they'll need to be at their peak.  Donnie is still a pouting, whining crybaby who can't get over how worthless he is and has to have pity-parties thrown for him by April and infantilizing "very important jobs" given to him to try and make him feel better.

I mean JEEZ.  The script is trying to manufacture stakes by dialing the competency of the heroes back to the Moronic Fuckups setting, and that just seems like cheating.  We're being told over and over what an unstoppable threat Bane is, but the only reason he seems to be so damn challenging is because Batman and the Turtles are all a bunch of stooges.

The art is so good, though, that I think the mini is STILL worth picking up just for the purdy pit'chers.  There are a couple of lovely two-page spreads, but one of the layout effects Williams uses that I dig is how he frames some of the panels with busts of the characters off to the side, watching the action within the panels.  He does it with Baxter during his conversation with Bane, and then again with the Turtles, April and Casey as they watch Raph and Robin slug it out.  This is what I meant earlier when I said that the book LOOKS exciting even when the script isn't.  Williams is very good at making dull moments appear visually stimulating.

Beyond that, I think the other artistic highlight was Baxter's transformation.  IDW has said that they like Baxter as a human, and I think that's the best way to go since he's better as a villain in their universe that way, but this non-canon IDW-inspired miniseries is a fun way to give us a "what if" scenario.  If IDW Baxter ever DID turn into a fly, this is what he might look like.

I'm still holding out hope that this mini gives us a twist somewhere in the second half that upends my downward-trending expectations.  There's still time.  Thus far, though, the characters aren't being treated with much respect and the story has been dully generic.  The art and colors are worth the $4, but just barely.