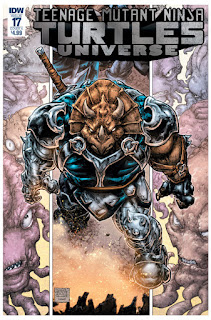 From a vantage point overlooking Krang's palace on Utrominon, Zom prepares to assassinate Krang with her sniper rifle.  She is stopped by Zog, who tells her that this is not the way to gain their freedom and that he wants to see what she has learned.  They return to the Archives and Zog reads the same classified files that Zom had.  Zom wants to start a full-scale rebellion immediately, but Zog convinces her to follow a more discrete strategy. 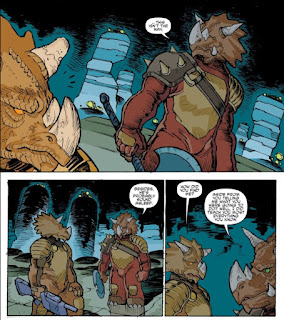 At the Barracks, Zog gathers all the Triceratons and reveals to them the truth.  The dropship containing the original herd was not destroyed by enemy combatants, but by the Utroms-themselves, who feared that batch of Triceratons were getting unruly and wanted to start over with a fresh generation of clones.  He tells them that with the Utrom Empire spread thin, now is the time to take the freedom they'd been yearning for by joining with separatist factions around Dimension X.  To do this, he orders Zom to take half the herd in one ship and find refuge by taking over an Utrom garrison, ensuring half their species survives.  The other half will remain on Utrominon with Zog and attack the Utroms as a distraction.  Zog and Zom bid a tearful goodbye and the plan gets underway. 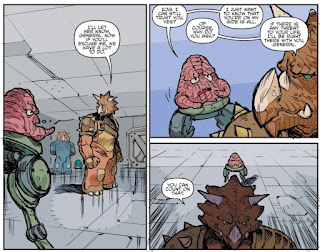 Zog meets with Krang and tells him that an emotionally deranged Triceraton shot up the Archives and stole a ship to escape.  He has dispatched Zom to hunt the renegade down.  Krang is furious and tells Zog to do whatever he has to in order to thwart this insurrection.  As Zog leaves, Krang asks him if he's still on his side and Zog confirms that he is.  Once outside, though, Zog convenes with another Triceraton and they signal Zom that they're ready. 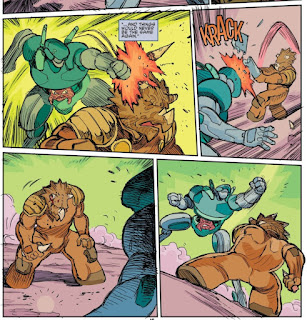 On the alien planet the Triceratons conquered for the Utroms the previous day, Zom's army takes the Utrom garrison by surprise.  Zom's right horn is broken in the battle, but the Triceratons prove victorious.  Much time passes as the Triceratons await news from Zog.  Eventually, the remainder of the herd meets up with them, but with the news that after defeating Krang, Zog vanished in a flash of light.

Taking command of the Triceratons, Zom leaves a message that she hopes Zog will find someday, should he ever return, thanking him for all he has done.  She then leads the Triceratons on their long odyssey to find their place in the universe.

In the Barracks, as the Triceratons break up into their two groups to begin their rebellion, a pair of young Triceratons sneak onto Zom's ship.  They get into an argument and start wrestling, accidentally falling out of the loading dock before the ship takes off. 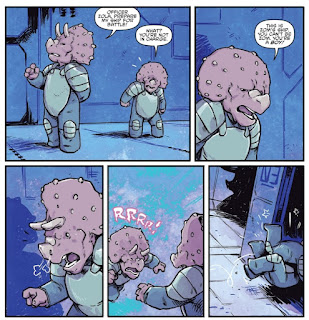 Watching the ship take off, they wish Zom luck and rejoin the rest of the young Triceratons.

*During the recap of the rebellion, the scene in which Zog chucks Krang out of an airship is taken from TMNT: Utrom Empire #2.

*Although it is not said what happened to Zog when he disappeared, he was most recently seen as a warrior in the Battle Nexus in TMNT Annual 2014.

*This issue was originally published with 3 variant covers: Cover A by Freddie E. Williams II, Cover B by Giannis Milonogiannis, and Incentive Cover by Tony Shasteen.

"From the Heart, for the Herd" is both a good companion and a bad companion to the Utrom Empire miniseries.  In case you haven't read it, that mini took the centuries-spanning history of the Utroms and boiled it down to its highlights.  After it was finished, there remained a lot of narrative opportunities left unexplored, as the mini only covered the gist of things and always from Krang's perspective.  And one of the big moments it had to provide the Reader's Digest version of was the Triceraton rebellion and Zog's betrayal of Krang.

"From the Heart, for the Herd" decompresses that sequence from Utrom Empire and tells the story in more detail and from the POV of the Triceratons.  And that's where this arc shines; we get into the heads of these characters and better appreciate their motivations.  Zom, who has been appearing in the TMNT ongoing, now has a tragedy to her backstory and we better understand why she loses her shit whenever one of her teammates is killed.  Zog, too, finally gets a personality to his name even if I'm not sure about the consistency of it.  He's eloquent, even-tempered, clever and treacherous in this story, where those elements were more described or implied than displayed during the haste of Utrom Empire.  Then again, in the 2014 Annual, he was portrayed as a bulldozing brute who couldn't string a sentence together, but there's a fairly unimaginative easy-out for that (blah blah blah centuries of gladiatorial combat turned him into a lumbering monster blah blah blah).

Those are the good things about "From the Heart, for the Herd".  The negatives are much the same as I discussed in my previous review.  It kind of feels like Mowry was reading Utrom Empire at the same time as he was writing these issues and course-corrected for his own discontinuity along the way.  So whereas Krang was dismissive and/or nasty to Zog in the previous chapter, here he tries to suggest that they're partners and share some sort of camaraderie.  It's an attempt to portray their relationship closer to how it was presented in Utrom Empire, but only after it was so badly misrepresented in the first chapter.  If by chance you ARE reading "From the Heart, for the Herd" in a vacuum without the context of Utrom Empire, you can't get a bead on how Krang and Zog get along because the nature of their relationship shifts drastically between the chapters.

Then again, it could just be an unintended visual portrayal from the artist.  Go back to the previous issue and reread Krang and Zog's discussion, but take a Sharpie and draw a smiley face on Krang.  It changes the context of the dialogue, especially Krang's parting words about how things will be changing for Zog once he's in charge.  Milonogiannis drew Krang with a sinister, evil face as he said it.  But then in this issue, Krang is pathetically begging for Zog to assure him that they're still on the same side.  Maybe as written, Krang's "things are going to be different" line from last issue was intended to be more of a friendly suggestion of rewards for Zog for remaining loyal to him?  As drawn, though, it came across as a diabolical threat.

I think this story is more confusing than it has any right to be.  The plot is actually very simple: Triceratons work for the Utroms, Utroms betray the Triceratons, Triceratons rebel against the Utroms.  But the mess of incompatible characterizations between outside appearances and sometimes even within this two-issue storyline just baffles the whole experience.  I appreciate how it told in detail an important plot point that had up until now only existed in summary, but it really could have used some better story editing.

As for "Triceratots"...?  Outside of "the cuteness", I'm not sure what this back-up really accomplished.  I mean, aside from making me wish the extra 4 pages would be given to the main story and the back-ups eliminated entirely, that is.