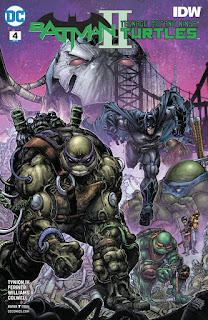 In the lair, April and Casey are busy getting the interdimensional portal set up, though Casey can't get the Turtles on the communicator.  That's because at Stockgen, the Turtles, Batman and Robin are surrounded by Bane and his Venom-enhanced Foot Soldiers.  Bane offers them one last chance to submit to him, but Robin rejects it and attacks Bebop (ruining Batman's escape plan).  As a brawl erupts, Raphael confronts Bane but is quickly thrashed.  Before Bane can break Raph over his knee, Splinter interrupts him.  Grabbing Splinter, Bane pummels him and the violence causes Stockgen to collapse.  Baxter Stockman suggests they salvage the mutagen-laced Venom and leave, and Bane agrees, abandoning the Turtles and Batman to dig Splinter out of the rubble. 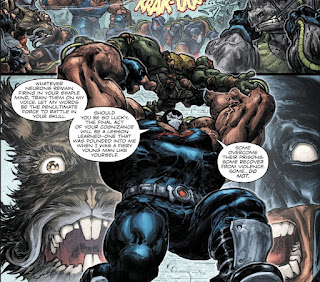 Later, in the lair, they get Splinter into a stable condition, but he's in a coma.  Donatello reveals that he stole some of the mutagen-Venom from Stockgen and suggests they use it to fight fire with fire.  Both Batman and Leonardo veto that idea immediately, as even regular Venom is too dangerous and addictive to even consider using.  Dejected, Donnie leaves the room to go pout.  Michelangelo suggests they order some pizzas, as it looks like they're in for a long night of strategy sessions. 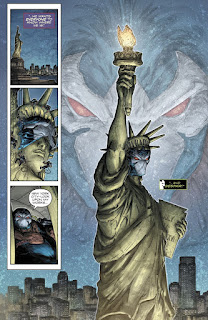 Elsewhere, Karai's remaining Foot Soldiers return to her with news about Bane's expanding criminal empire.  She demands to know where Bane's new base of operations will be and one Foot Soldier reveals that he's taking over the Statue of Liberty to send a message to the city.  Indeed, Bane has his Foot Soldiers put a luchador mask over Lady Liberty's face as he declares his dominance over New York. 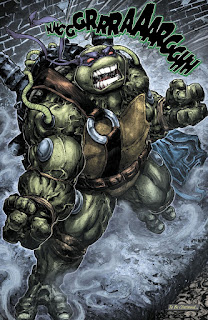 That night, in the lair, everyone but Batman and Leo have gone to sleep.  Looking over maps, Batman suggests they monitor the subway lines, as it's the likeliest means of travel for the Foot.  Once they've figured out their most common routes, they'll be able to mount an offensive.  As they solidify their strategy, Donnie sneaks out.  He decides that the only way he'll be able to help his brothers against Bane is to be stronger and so he injects himself with the mutagen-Venom.

Is it just me, or do all the characters seem kinda... dumb in this miniseries?  Batman says he has a plan to escape but it requires them not to engage the Foot in battle.  Yet Robin attacks Bebop anyway and ruins it.  Bane wastes time offering his deadliest foes the chance to submit to him which he has to know they'd never do.  Then he goes into a rage and destroys his own lab, forcing his Foot to retreat so they can save the mutagen-Venom.  Splinter gives a speech about how Bane relies on strength and he will defeat him by using his brain, but we've already established that Bane is highly intelligent and not a mindless bruiser.  And anyway, Splinter doesn't use his brain at all to attack him, he tries to defeat him in a straight fight and gets crippled into a coma for it.  Elsewhere, Karai's all like, "Where's Bane hiding?" and a random Foot Soldier is like, "Bitch, the Statue of Liberty is wearing a luchador mask, where do you think he's hiding?!"  And EVERYONE is telling Donnie not to use the mutagen-Venom because jeez, dude, you're supposed to be the smart one.  But he juices up with it anyway.

Why is everyone in this comic so stupid?

That's a real problem, because when the tension hinders on your protagonists being lunkheads who keep making the wrong choices, you lose your investment in the story very quickly.  And the story-itself is running drearily by-the-numbers so far; there hasn't been one narrative beat yet that wasn't completely telegraphed.

The dialogue, too, seems extremely overwrought, perhaps as a consequence of hiring a second writer to pen the dialogue exclusively.  When you only have one thing to focus on and you want to earn that paycheck, I guess you're gonna overdo it and give the characters nothing but ponderous soliloquies that would make Chris Clarement blush.

I'm rapidly losing my interest in this miniseries and, though I think I've said it before, really am just picking it up for the art.  That remains a consistent source of appeal and even sillier moments, like Lady Luchador, have an epic feel to them that overcomes the shortcomings in the script.  But the fact of the matter is, this is a pretty dumb comic.