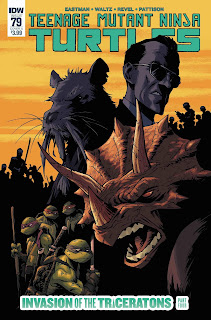 "Invasion of the Triceratons, Part 4"

In the streets of Manhattan, the EPF and the Triceratons are engaging in all-out war, with Bishop continuing to lead the charge (using the mind-controlled Slash as his puppet).  Mr. and Mrs. O'Neil have been picked up by one of Baxter Stockman's robot-controlled evacuation vehicles, but rather than being ushered out of the city like the rest of the citizens, they are being taken to TCRI.  Mrs. O'Neil makes sure to get plenty of footage of the battle as they drive through it. 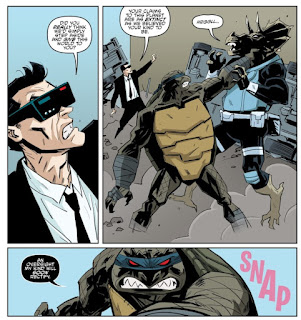 At Foot Clan HQ, Raphael and his brothers object to being put under house arrest, as they are no longer members of the Foot Clan and Splinter has no jurisdiction over Clan Hamato.  Splinter reminds them that he is still their father and what he says goes, ordering the Foot Soldiers to keep a strict watch over his sons.  Once he leaves, the Turtles sense a conflict in Jennika and try to reason with her.  Michelangelo tells her what a psychiatrist friend of his gave him some advice about Splinter; that even though he's their father and her master, he is still a human being and capable of making mistakes.  Leonardo tells her that to be the best Chunin possible, she needs to recognize when her master is in error and make the choices that best suit him, whether he realizes it or not.  Jennika agrees to help them slip out of Foot Clan HQ and hopefully get to Commander Zom before Splinter has her assassinated. 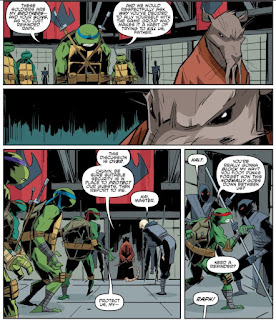 At TCRI, Mr. O'Neil catches up with Baxter Stockman, who seems pleased that he's recovered from his paralysis.  The O'Neils chide Baxter for making his evacuation of the city a for-profit endeavor, but they aren't surprised by it.  Mr. O'Neil suggests that Baxter should be using his resources to get the Triceratons out of New York, not the residents, and that gives April an idea.

On the rooftops, the Turtles are caught in the crossfire between the EPF and the Triceratons.  They try to take down an EPF sniper, but that only draws attention to them.  Donatello gets a message from April, who relays a plan to him.  He and his brothers then fight their way through a unit of EPF soldiers. 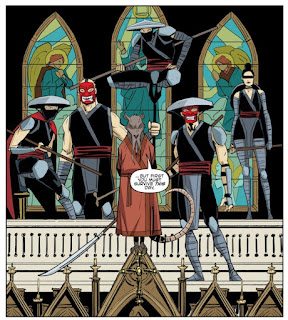 At a church which is now the Triceraton base of operations, Commander Zom coordinates her soldiers and feels that soon she will triumph over the EPF.  And after taking Manhattan, the Triceratons will prosper and eventually reclaim all of Earth.  Splinter and his Foot Elite Guard arrive and tell Zom that she will not survive long enough to bring her plans to fruition.  Before they can attack, the Turtles show up and initiate a standoff.

*This issue was originally published with 3 variant covers: Cover A by Damian Couceiro, Cover B by Kevin Eastman and Tomi Varga, and Retailer Incentive Cover by Dave Wachter.

It's good to see the Turtles finally start taking a major role in their book again.  "Invasion of the Triceratons" hasn't been a bad arc or anything, but the Turtles have been sitting in the backseat for most of it.  This book IS called "Teenage Mutant Ninja Turtles" after all.

The focus on the Turtles also sees us with a bit of reward on the "Splinter leading the Foot Clan" thing that's been going on for thirty issues.  I think we all knew that a point of contention, a SERIOUS point of contention, was going to come between the Turtles and Splinter; it was just a matter of counting the pages until it happened.  They've been estranged, sure, over things like Splinter even considering taking over the Foot (which drove Mikey away) to Splinter killing Darius Dun (which drove the rest of his sons off), but this is the first time they've had to butt heads.  It's a case where I HAVE appreciated the slow-burn build-up for this arc.  The pressure has been mounting, little by little, and they've been TRYING to stay out of each other's way as much as possible, but this was going to go down eventually.

I'm hoping the showdown next issue doesn't end in a copout.  I don't want Splinter to realize the error of his ways too soon, but rather to have this confrontation estrange them further and build additional tension over the next twenty issues or so.  Solutions should never be easy, and really, this is a new dynamic I've been enjoying and I don't want to see it go so soon.

The war with the Triceratons has been "big" but it's also been sort of happening in the margins while the more intimate storylines have been developing around it.  I don't feel shortchanged on it, not in the way I did with the almost completely unseen gang war back during "City Fall", as we've gotten to see enough warfare in the streets so far (especially in this issue).  That said, I can't make heads or tails of who is supposed to be "winning" this thing.  Bishop/Slash is trouncing Triceratons left and right and even the EPF snipers are taking them down with ease.  But then at the end of the issue, Zom is gloating that her forces will soon be victorious when all we've seen so far is them getting wrecked.

For whatever reason, Damien Courceiro had to check out on the art duties for "Invasion of the Triceratons", leaving Brahm Revel to finish up the arc.  Revel had previously done the Jennika-centric back-up story "What is Ninja?" from TMNT Universe #6 thru TMNT Universe #9.  Revel's style isn't a duplicate of Courceiro's by any means, but it isn't so offbeat as to derail the seamlessness of the storyline.  They blend well-enough and I'm sure Pattison's colors can be thanked for providing much of the visual unity.  Revel's aesthetic is perhaps a bit "sketchier" in appearance, particularly in the hands and feet, where it looks like he just tried to clean-up a thumbnail rather than complete the pencils.  There's a stylistic consistency about it, so there isn't any one instance that stuck out to me, but once you begin to notice how the hands and feet all seem to terminate in these weird jagged blocks whilst the rest of the bodies are nicely detailed, it might become bothersome.

What Revel does really well, though, are layouts.  "What is Ninja?" wasn't a favorite of mine in terms of the script, but the layouts for the art were its real high-point.  Revel brings that strength to his work on "Invasion" and even minor action sequences, such as the alley fight between the Turtles and the EPF (a throwaway skirmish), have a lot of panache and energy.  And there was excellent tension in the argument between Raph and Splinter; he draws a very menacing-looking Splinter that somehow manages to keep from crossing the line into appearing villainous.

"Invasion of the Triceratons", I suppose I can say even before it's conclusion, isn't going to go down as one of my favorite storylines in the series.  While I'm glad to get the Turtles back into the plot on a significant level, I really don't think that should ever have been an issue to begin with.