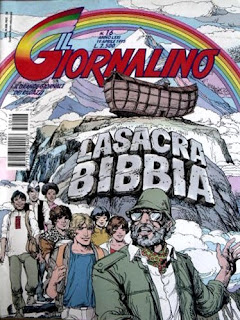 Davos, Switzerland.  The Turtles are enjoying a ski trip when they're suddenly attacked by several armed goons in masks.  The goons chase them over a cliff and leave, assuming the Turtles are done for.  Luckily, the Turtles land in a safety trampoline at the bottom of the cliff.  The Turtles aren't surprised that they're being attacked, as they recently took a job for the Swiss government protecting a shipment of UNICEF cargo.  They decide to cut their ski trip short and get back to guarding the cargo, now that they know evildoers are after it. 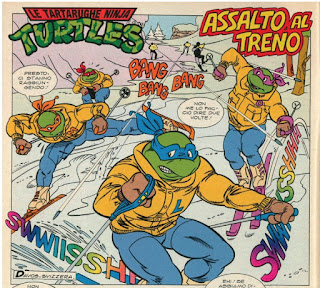 Elsewhere, the goons return to their cabin base and are revealed to be Foot Soldiers working for Krang.  Krang wants the UNICEF cargo, as it is actually state-of-the-art lab equipment.  Though intended for medical science, Krang has deduced that he can use it to make chemical weapons.  And with the Turtles gone, nothing can stop him from stealing it. 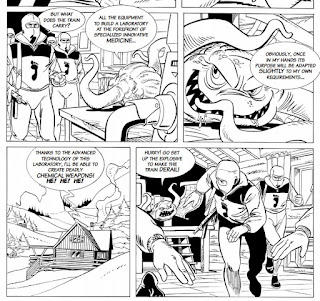 On a back road, the Turtles are driving their Jeep to the train station when they're run into a tree by the Foot Soldiers in their own Jeep (who don't know it was the Turtles they sent into a crash).  Recognizing that it's the Foot Clan they're dealing with, the Turtles give chase.  To stop them in time, the Turtles "borrow" a Swiss army helicopter. 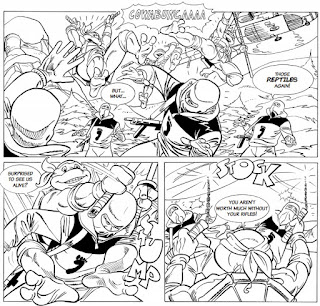 They spot the Foot Soldiers attaching explosives to the train rails and repel down from the helicopter to stop them.  They beat up the Foot Soldiers and remove the explosives just in time to let the UNICEF train pass by unscathed.  As a reward, the Swiss government gives them a week-long ski holiday in Davos.

*In January 2018, TMNT fan Nortock Diab coordinated a translated edition of this story after coming into possession of the original black and white pages.  Released unofficially as Tales of the TMNT Special by ND Publishing, it featured a new cover by Benjamin Carret, frontispiece and epilogue by Nortock Diab, and an English translation with script revisions by Diab and Sera Leggett.

*You can find the PDF of the translated edition from ND Publishing here.

So a very big thanks goes out to Nortock Diab and his team for translating this comic and making it available for fans!  And another big thanks to Adam Winters, who shared a number of other Il Giornalino TMNT comics with me.

An index of the Italian Il Giornalino TMNT comics is something I've wanted to put together for a while, even though it would be incomplete (info on these comics is surprisingly scarce).  But there just aren't enough hours in the day.  I still have to finish my reviews for the Fleetway UK TMNT comics and I haven't even gotten started on the index for the Dengeki Japanese TMNT manga.  I should get paid for this shit.

But one of the reasons I would LIKE to get this info out there, even if I can't read Italian, is because the art in Il Giornalino's TMNT comics tended to be very, very good.  I often can't make heads or tails of the stories, but they sure are nice to look at.

It's cool to have this story translated, at least, to give a better idea of what these comics were legitimately like.  As you can see, they're inspired by the Fred Wolf TMNT cartoon but don't ascribe to its continuity.  Or any OTHER continuity.  The Turtles are more like celebrity heroes or special agents who can be hired by governments to perform security tasks.  That's a new one.

Though when I got to the part of the story where the Turtles were risking their lives to see a UNICEF delivery through, all I could think about was this: 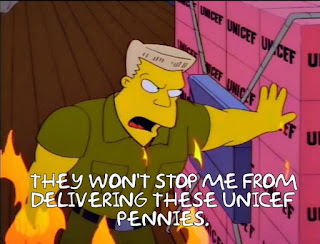 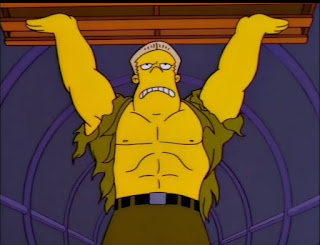 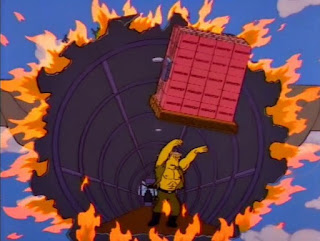 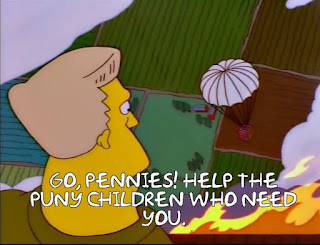 Some of the other anomalies in this story are worth taking a look at.  You've got human Foot Soldiers, for instance, and they all report to Krang who is operating independently of the Shredder.  One of the weirder plot holes is that the Turtles don't recognize the Foot Soldiers when they're on the hill (despite the Foot logo on their jackets), but they recognize them immediately when they're in the Jeep, even though they never changed clothes.  Also, the color version of this story made Krang green, apparently: 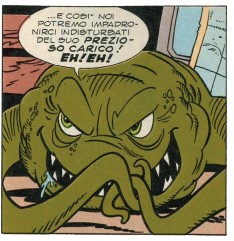 The art by Montanari and Piccoli is very crisp and expressive; it's nice to see it in black and white so you can better appreciate the line work.  The colors in Il Giornalino were never so bad they inhibited the art, but I think green Krang up there might give you an idea at how much quality control went into that aspect of the comic.

Well, hopefully one of these days I'll be able to put that Il Giornalino index together.  It's a little daunting since I don't know all the issues that had TMNT content in them, so there'd be gaps, and I can't read any Italian, so my summaries would be thin and vague.  I'm better off focusing on the Fleetway stuff, since it's in English, and the Dengeki stuff, since I speak Japanese.  And don't even get me started on the Spanish TMNT comics from Division.  I wouldn't know what to do with those even if I had any.