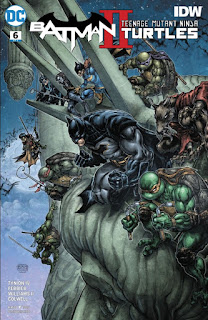 Donatello arrives at the Statue of Liberty in the Turtle Blimp while his brothers and the Bat-Family arrive in the Party Wagon (via ferry).  Bane dispatches his Elite Guard to attack the Blimp, but Donnie detaches the glider and explodes the balloon, releasing his Anti-Venom gas.  All of Bane's Foot Soldiers, as well as Bebop and Rocksteady, then revert back to normal.  Meanwhile, Batman, Splinter and the Shredder confront Bane in the statue's head. 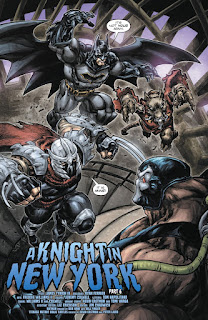 Karai and her Foot Soldiers then take on Bane's army at the base of the statue.  April uses the Turtle Launcher to catapult the Turtles and the Bat-Family into battle where they use Donnie's stun weapons to incapacitate the Foot Soldiers.  April and Casey then work to free the New Yorkers whom Bane captured and get them onto ferries. 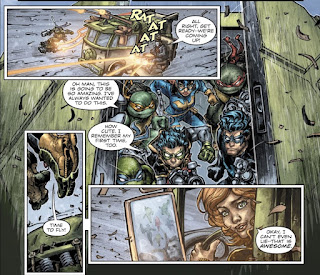 Batman, Splinter and Shredder destroy Bane's Venom pack and knock him down to the ground, but Bebop and Rocksteady choose to stay loyal to him and fight by his side.  The Shredder then gives a speech to the remaining Foot Soldiers, urging them to abandon Bane and follow their true leader.  The Foot Soldiers then cease fighting, leaving the Turtles and Bat-Family to take on Bebop and Rocksteady.  Donatello confronts Bane and darts him with Anti-Venom laced with elephant tranquilizers and he goes down for the count.  The battle won, the Shredder agrees to go back to prison without a fight, following his arrangement with Batman, and Bebop and Rocksteady are also carted off to the slammer. 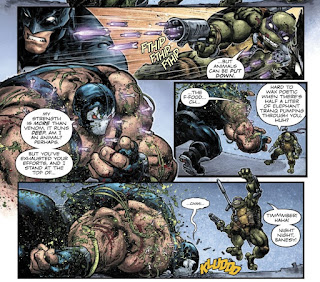 Later, in the sewer lair, Raphael and Michelangelo want to know what Batman and Shredder's arrangement was.  Batman explains that in exchange for his help and his vow to return to prison, Shredder wanted only a rematch against Batman.  They had their fight and the Shredder honored his end of the deal.  Donnie then apologizes to everyone for causing all of this, but Batman assures him that he has learned from his mistakes and became a better person as a result, so it's all good.  With Bane in tow, the Bat-Family returns through the portal to Gotham City.

That evening, Donnie finds that Batman left him a gift before leaving.  It's the "training protocol"; the regimen that Batman makes each Robin go through during their training.  Donnie can't wait to get started on it, while his brothers all beg to be included.

*This story is continued from Batman/TMNT II #5.

Donatello sure got a lot of people killed because he felt sorry for himself, to say nothing of the millions of dollars in property damage and the broken lives left behind.  But it's okay, because he learned his lesson and improved himself along the way!  Whew, I'm glad THAT's been resolved.

I haven't been too kind to this miniseries over the past six months and, no, I'm not going to start being nice now, either.  The narrative was sloppy, full of mischaracterization, and the protagonists inexplicably acted like morons just to enable the plot.  Drama was introduced and then flippantly resolved, sometimes completely off-panel, because no actual effort was put into developing those sources of tension.  The plot was thin and predictable, the dialogue was overwritten, and Batman honestly seemed to get lost in the whole thing.  If this story had just been about Bane coming to New York and the Turtles taking him down on their own, I don't think much about this script would have been fundamentally altered.  The Dark Knight felt like a hanger-on most of the time and existed just to offer Donatello emotional validation during his pity parties.

To go Devil's Advocate for a moment, I suppose you could say that the thin premise with slapdash tension and shallow characterization felt sort of like a "plot" a child would come up with while playing with their toys on a lazy Saturday afternoon.  Indeed, the entire sequence wherein the Turtle Blimp and the Party Wagon contribute pivotal roles, right down to a recreation of the 1987 TMNT cartoon's title sequence, definitely has that "kid playing with his toys" feel to it.  It's certainly not sophisticated, not by a longshot, but I guess if you want to be generous then you can view it as having that sort of feel.  But it still means that the thing reads like it was written by a 7 year-old (who really, really didn't like Donatello).

But oh man, that art.

If you pick this volume up for anything, it's going to be for Williams' art with Colwell's colors.  I suppose when you have visuals this nice, you don't really need a solid script to go along with it.  Well, that's not true, a solid script would have been a nice bonus, but I DO feel like I got my $24-worth from the artwork alone.  So I'm not feeling buyer's remorse even if I thought the story sucked.

The first Batman/TMNT crossover was very good, overcoming its crossover gimmick to give us a solid story about hero and villain team-ups with some surprises at the end.  Batman/TMNT II is dull, predictable and shows a distinct lack of understanding for these characters, which is so puzzling, considering Tynion wrote them just fine in the first mini.  If there is a third one, I'm going to take to it with caution.