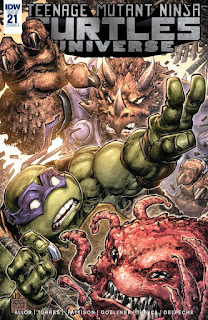 Commander Zom and her Triceratons arrive on Burnow Island, coming in peace, but are immediately fired upon by the Utroms.  Unfortunately, there has been something of a power struggle in the wake of General Krang's death, resulting in "misinterpreted" orders.  Ma'Riell convinces Kleve to hold his fire and Zom convinces her soldiers to put their weapons down, as well.  The Triceratons are then welcomed as refugees, but tensions run high due to space constraints as well as the rocky history between the races.  To help broker peace negotiations, Donatello is brought in as a mediator. 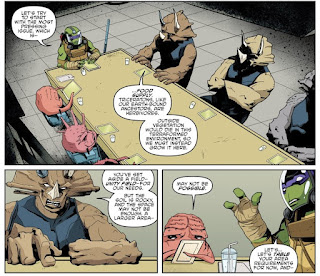 The talks between Ma'Riell and Zom don't make much progress, stemming mainly from thelimited space on Burnow Island and the failed attempts by Triceraton scientist Yot and Utrom scientist Churk to grow crops in the post-Technodrome terraformed fields.  Churk knows that the Triceratons have grown crops on less hospitable worlds than this one, but Yot refuses to share the secret. 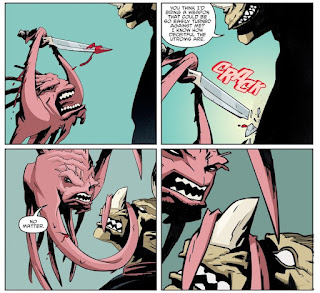 Meanwhile, Kleve attempts to revive war criminal Ch'Rell (and Ma'Riell's brother) from his stasis, but fails to override the security measures.  He is attacked by a Triceraton, Drell, and survives the assault.  Kleve refuses to name his attacker so that all Triceratons ultimately come under suspicion and Donatello grows more suspicious of Kleve's intentions.  Donnie begins monitoring him while also mediating the peace talks. 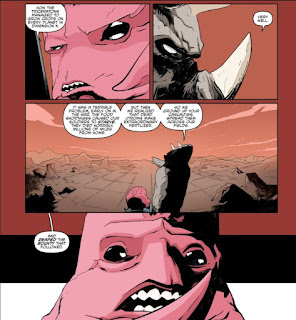 Eventually, progress is made on the peace talks and Ma'Riell and Zom agree to sign a treaty on Unity Field that evening.  Out in Unity Field, Zot finally concedes to tell Churk what the Triceratons' secret was to growing crops on inhospitable worlds during wartime: They ground up Utroms and used them for fertilizer.  As this shocking revelation is made, an unseen individual puts Zot in the scope of their sniper rifle.

"How Woody Spent His Triceraton Invasion"

As the news announces that "terrorists" are attacking Manhattan, Woody gets a call to deliver a pizza across town.  Hopping on his scooter, he throws caution to the wind and drives off. 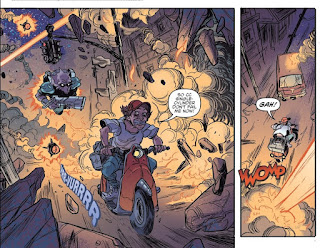 He narrowly maneuvers his way through a Triceraton/EPF battle and arrives at the 2nd Time Around shop, where Mr. O'Neil thanks him for the delivery and tips him $5.  Hopping back on his scooter, he heads back to work, just missing a battle between the Triceratons and the Purple Dragons.

*This issue was originally published with 3 variant covers: Cover A by Freddie E. Williams II and Jeremy Colwell, Cover B by Mark Torres, and Incentive Cover by Nathen Greno and Sabine Rich.

"Invasion of the Triceratons" was an epic storyline that unfortunately suffered from a hasty conclusion.  The Triceratons being teleported to Burnow Island was a sloppily convenient resolution, with the negotiations between the Turtles and Ma'Riell happening entirely off-panel.  It felt... cheap.  Luckily, this two-part epilogue to "Invasion of the Triceratons" is here to try and add some substance to that quick-and-dirty resolution.  So far, it's actually doing a pretty good job.

Allor writes a grim and suspenseful story centered around peace negotiations between the pitiful remains of two historically warring races.  There isn't too much action in this issue, but the tension is thick-enough to cut with a knife.  Kleve's deceitful machinations provide much of the obvious conflict, but my favorite moments were the smaller exchanges that better exemplified the longstanding hostilities between the Utroms and the Triceratons.  Moments like Drel and the Utrom processing him getting into a spat over a previous battle, or the stinger ending where Zot reveals to Churk that they used Utroms for fertilizer.  These are two races that have long HATED each other and now they're trying to pull a "can't we all just get along?" shtick.  Reality is hardly that simple, and even without Kleve's scheming to exacerbate the conflict, any hope of putting water under the bridge is remote at best.

Mark Torres provides the art and his dark, inky style is an excellent fit for this drab and joyless tale.  Ronda Pattison's colors hem a bit closer to what Fotos did with Torres's pencils back in Infestation 2.  She doesn't try to brighten things, like what we saw Delgado apply to Torres's work on TMNT/Ghostbusters 2, so the moodiness makes it through intact.

"Lost Causes" is looking good so far.  I'm hoping it doesn't go for any easy answers at its conclusion next issue, as going for the most convenient solution was what hurt "Invasion of the Triceratons" and made this epilogue necessary in the first place.