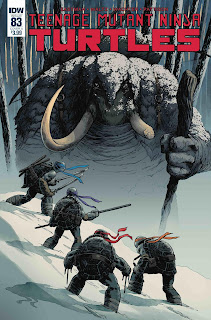 In the frozen wasteland, the Turtles try to talk to Manmoth, but he insists on hunting them, instead.  They make a break for it, but Manmoth quickly tracks them down and a head-on fight ensues.  The immortal Manmoth is unstoppable, so Michelangelo tells his brothers to keep him occupied while he sets a trap.  The Turtles take it on the chin until Mikey goads Manmoth into pursuing him.  Manmoth steps into Mikey's trap, a snare, and falls to the ground where the other Turtles put their weapons to his throat.  With humor, he yields and agrees to speak with them over dinner (taking a particular shine to Mikey). 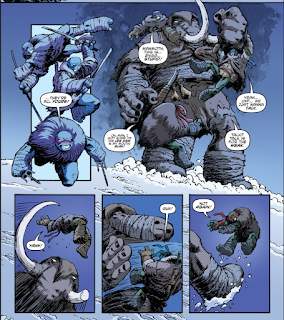 At TCRI, April and Baxter watch news anchor Irma Langenstein's coverage of the "hero" Baxter Stockman.  April tries to pry info from Baxter regarding his meeting with Agent Bishop, but Baxter merely threatens her ego by mocking her scheme to keep tabs on him for the Turtles.  April reminds him that it was her plan that made him a "hero", but Baxter in turn reminds her that when the fickle populace forgets about his supposed good deeds, she will then be disposable to him.  April renews her worth, reminding Baxter of both the rat infestation plaguing New York as well as his Mouser robots being a potentially lucrative solution. 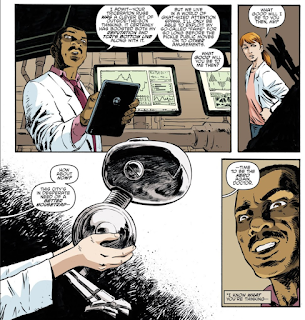 Elsewhere, the Rat King leads the hypnotized children to the ruins of a bridge and mocks them before playing his pipe that will send them to their doom. 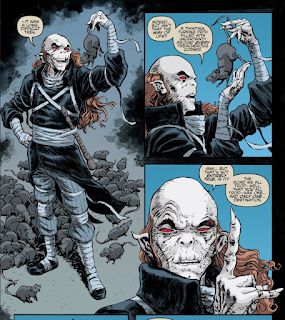 At the restaurant HQ of Lupo's mob, Jennika confronts the crime lord and demands he renew his allegiance to the Foot Clan.  Lupo reveals that he knows about Splinter's defeat at the hands of the Turtles and, sensing weakness, orders his men to gun down Jennika's Foot Soldiers as a message.  Before Lupo can kill Jennika, Casey, Hun and the Purple Dragons burst in and beat everybody up.  Jennika wants to kill Lupo for revenge, but Casey talks her out of it. 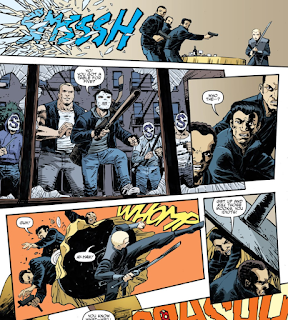 Back in the frozen wasteland, Manmoth tells the Turtles that he was once like his siblings and played "the game" with them: Utilizing mortals as pawns to one day claim ownership of the world.  Using others to fight his battles for him made him weak, and when he recognized that, he swore off the game and came to the wastelands to live as a hunter.  The Turtles ask if he will tell them how to defeat the Rat King, but Manmoth confesses that despite how he feels about his family, he will never betray them.  He does say that they are all slaves to their whims and cannot overcome who they ultimately are on a fundamental level.  This triggers something in Leonardo, who tells his brothers that it's time to leave.

Manmoth leads them to a series of caves and tells them which one to go in if they wish to be led to wherever the Rat King is.  They thank him and enter the cave, though Manmoth gives Raphael some parting wisdom, suggesting that he will never find peace until he comes to terms with his own desire for isolation away from his siblings.

The Turtles arrive at the bridge in New York, moments before the Rat King sends the children to their deaths...

*If I'm not mistaken, this issue marks the IDW debut of Irma.  With Burne having made his debut a few issues ago, I guess that just leaves Vernon as the last lingering Channel 6 personality.  Is the world ready for a new Vernon?  Can't be any worse than the Will Arnett version.

"Kingdom of Rats" is still slogging along, taking twice as long to say whatever exactly it is that it's trying to say.  It seems like the IDW series is spinning its wheels in anticipation of the milestone 100th issue, and so everything between now and then is just an exercise in stretching plots out and delaying progress until they get to that "event" issue where something notable can finally happen.

Which is weird, because in summary, it certainly doesn't SOUND like nothing is happening.  Krang just died, the Triceratons just invaded New York, the Rat King just kidnapped dozens of kids... But Lord Almighty, it's all so plodding and dragged out that it doesn't FEEL like anything is going on.  But that could just be me.  And it could just be fatigue from three or more IDW TMNT books a month for seven years.  But after an upswing in momentum during the "Trial of Krang" arc and issue #75, it feels like the book is losing steam again.  Reminds me of the rather listless arcs that immediately followed the conclusion of "Vengeance" and the #50 milestone issue.  This series seems to save all its energy for those "divisible by 25" issue numbers and then go into hibernation for a stretch afterward until the next Arbitrary Collector's Issue comes around.

Then again, maybe everyone else out these is having a blast with this arc and I'm just being cynical.  I've been known to do that.

Onto the specifics, though Manmoth was introduced some issues back, this was his big spotlight.  He's got a great look and is a fun update from his Archie Comics incarnation, keeping the "barbarian savage" motif whilst forgoing the "dumb caveman" elements that limited what that character could accomplish.  Wachter gives us a fun little game of tag between him and the Turtles (and that's much closer to what it is, as opposed to a "hunt"), though Mikey's trap that wins the day seemed so telegraphed and obvious one wonders how Manmoth survived five minutes in the wild.  They might as well have just put some M&Ms under a box propped up with a stick; he'd have probably fallen for that just as easily.

Baxter and April playing each other, while only two pages, struck me as much more exciting than the actual action elements of the issue.  They're stuck in this sort of chess game, where each is trying to maneuver the other into check, though they craftily find ways to slip free.  It's a reminder that these are both genuinely intelligent characters, with April's characterization recalling her excellent portrayal way, way back in her Microseries issue.  Each knows exactly what the other is up to, though both need the other for their own ends at the moment, yet both are trying to find ways to gain the advantage and oust the other.  It's just two pages, but it's very engaging.  And much like the dissolving relationship between Splinter and the Turtles, it's one of those ongoing "background" storylines that has kept me picking the book up even if the primary arcs in the foreground have been leaving me cold.  I guess the difference is that even when the story arcs aren't all that interesting, the characters remain vibrant and fascinating, so I'm still invested in what they're up to even if it's comparatively mundane.

But then there's Jennika's continued flirtations with Casey, which I don't particularly care about.  More power to you if that's your thing, though.  I do want to see what Hun's game is, getting back in good graces with his son.  I've got my guesses, but time will tell.  And if the book has me thinking about its plot threads and trying to draw conclusions, that really does mean that it's doing a good job of keeping me on the hook, contrary to my earlier griping.

Oh, and the Rat King was in this issue.  He's the motivation for the Turtles doing everything they're doing in this arc, but boy has he been sitting things out for three issues.  The finale next month had better deliver.