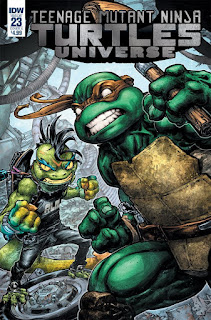 "...And Out Came the Reptiles, Part One"

At Mutanimals HQ, Mondo Gecko tries to cheer up the disembodied remains of Mutagen Man, but his best friend seems more sullen than ever.  Lindsey takes Mondo aside and explains that Mutagen Man is dying and there's nothing she can do without the proper EPF equipment.  Mondo asks Lindsey to put Mutagen Man in a coma to keep him stable long enough for him to retrieve the equipment.  Hob forbids the mission, but Mondo blows his "dad" off and storms out on his own. 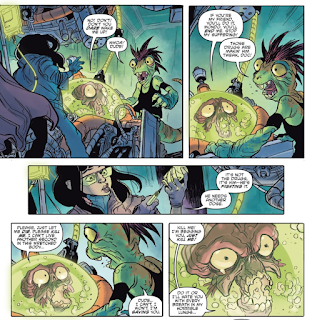 He visits Michelangelo at the lair and asks to see the EPF personnel data he gave to Donatello.  With it, he plans to interrogate an EPF goon and get details on how to get into their base.  Concerned, Mikey comes along.  They arrive at the EPF soldier's home and Mondo immediately begins beating the man senseless in front of his young daughter.  Mikey drags Mondo away, insisting that what they're doing is wrong, even if the EPF are their enemies.  He suggests to Mondo that they can find another way in. 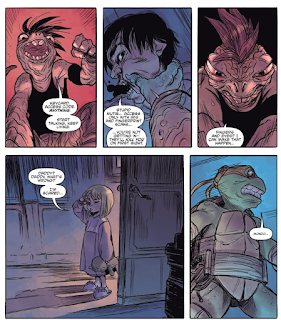 Together, Mondo and Mikey take down one of the guards at the base and use his fingerprint and retina scan to get inside.  Things are going well until Mondo finds the cell where the EPF had previously incarcerated him and the other Mutanimals.  Going berserk, Mondo throws a fit and begins destroying everything, vowing to take down the fascist establishment that's been putting a jackboot to his neck all his life.  Mikey calms him down, reminding him that Mutagen Man's life depends on their success. 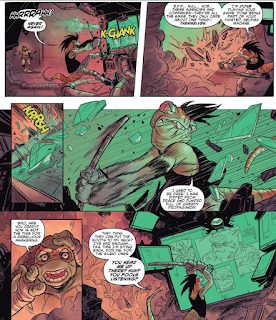 Just then, Agent Bishop and some EPF Guards arrive and corner them...

In the wake of the Triceraton invasion, an EPF truck transporting Triceraton corpses to headquarters is attacked by Zodi.  The mutant scorpion almost succeeds in killing the guards, only to be stopped by Nobody. 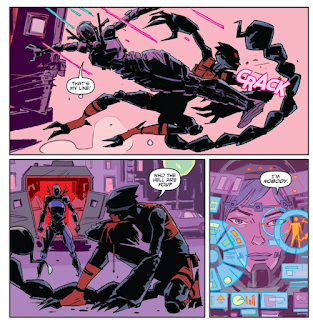 Nobody makes short work of Zodi, leaving her unconscious body with the EPF.  While she doesn't know what Null wants with the bodies of Triceratons, Nobody is sure it was for no good.

*Mutagen Man was last seen recovering in the back-up story in TMNT Universe #18.

*Mondo Gecko and the other Mutanimals were taken captive by the EPF in TMNT Universe #67.  Mondo stole the EPF personnel data while escaping in TMNT (IDW) #69.

*This issue was originally published with 3 variant covers: Cover A by Freddie E. Williams II and Jeremy Colwell, Cover B by Pablo Tunica, and Incentive Cover by Marco Itri and Brittany Peer.

Man, TMNT Universe has been pretty, er, heavy lately, hasn't it?  The last arc dealt with the futility of warring races trying to live in harmony together within the same nation.  Now we're diving headfirst into some Brian's Song stuff about the tragic mercy of medically assisted suicide?  Cowabunga, dudes.

I suppose due to these much, much darker elements, TMNT Universe has been feeling like the more substantial book lately, compared to the main series it supplements.  Perhaps by virtue of being a tie-in book that deals with ancillary characters, it has the freedom to cover some riskier material than the primary title that is going to be seen by a wider audience.  I'm grateful that Universe has been giving us these sorts of stories, as they provide a solid contrast with the ongoing's often lighter atmosphere, and I hope that after Universe ends with #25 and the tie-in books return to periodic miniseries, we don't lose these more challenging storylines as a consequence.

Seymour's (Mutagen Man's) life was no picnic from his very introduction, but he's been in even more rotten shape for quite some time now.  We got a brief update on his condition several issues ago, but his fate has been a lingering thread.  His terminal illness and basically begging to die with a final shred of dignity and peace is an all-too-real scenario that may hit closer to home for some readers than others.  Mondo's predicament, where his concern for his friend outweighs his friend's sincerest wishes, puts him in that difficult space where he can't be sure if what he's doing is in Seymour's best interest or to satisfy his own potentially selfish desire to keep his friend in his life.  This is... This is a Teenage Mutant Ninja Turtles book, right?  Yikes, man.

Mondo's confrontation with Hob addresses a dynamic that I never really considered before now: Hob created Mondo and is essentially his father.  At the very least, he's Mondo's paternal figure, what with the gecko being the one member of the group to be stuck in "rebellious teen" mode.  It's an angle I hope the writers run with in future Mutanimals stories, the father/son thing, as it has the potential to carve out a unique dynamic for these two characters.

Michelangelo and Mondo as best buddies is one of those staples of their relationship that's been consistent in every incarnation of the franchise that Mondo has appeared in.  IDW hasn't had the opportunity to explore their friendship much before now, so it was fun to see that buddy-buddy dynamic finally get a spotlight in this universe.  Well, "fun" might not be the word for it, as Mondo spends the issue raging against the machine and lamenting his impotence in the face of his ill friend's certain death.  Bossa Nova.

Tunica's art is as wild as ever, but his Mondo takes the cake.  He goes all-out with the metal-head aesthetic and Mondo looks like something a mosh pit spat out.  He isn't cute (Tunica doesn't do "cute") and is extremely ugly, but in an almost endearing sort of way.  His excessively wrinkly, frog-like appearance reminds me of how Gollum looked in the old Rankin-Bass Hobbit animated film.  I dunno, it just did.

The back-up is another brief tease that Null is up to something.  It was fine for what it was, but didn't exactly move that storyline along or anything.  I assume that next time we see Zodi, she'll be in EPF custody?  Someone make a note of that, because I'm going to forget that this back-up ever happened by the time we get there.

This penultimate story in TMNT Universe is harsh and aiming for some serious juxtaposition, putting the franchise's two most Wild and Crazy Guys in a dark drama about the futility of resisting a terminal illness.  Turtle Power, dudes.