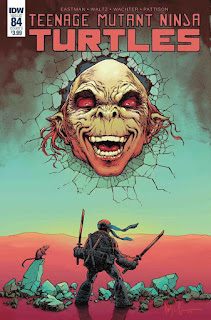 On the bridge, the Rat King threatens to drop one of his hypnotized kids into the river.  The Turtles tell him to back off, but he instead hurls the child over (though the kid is saved by Michelangelo and Raphael).  The Turtles attack, but are held off by the mind-controlled juvenile hordes. 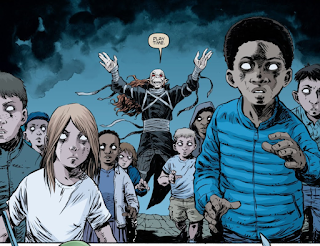 At TCRI, Baxter Stockman and April put the finishing touches on restoring the Mousers and Flyborgs.  Baxter ponders how he'll bill the city for eliminating the rat infestation, but April suggests he do the job for free, as there may be a larger reward in it for him in the long run.  They dispatch the robots and the Flyborgs use their echolocation sensors to find the rats and laser targeting to guide the Mousers successfully toward their prey.  The robots follow the rats toward their largest gathering: The Bridge.

And back on the bridge, the Rat King sends in a mischief of rats, further stacking the odds against the Turtles.  Leonardo tells Donatello to subdue the kids while he seeks the high ground.  Leo begins to meditate and meets the Rat King on the Astral Plane.  He challenges the immortal and they begin to fight.  In the real world, Raph notices the Rat King's body seems distracted and attacks.  Much to the dismay of Leo and his plan, the ancient Rat King has long ago mastered multi-tasking between both the Astral Plane and the real world, taking both Leo and Raph on at the same time. 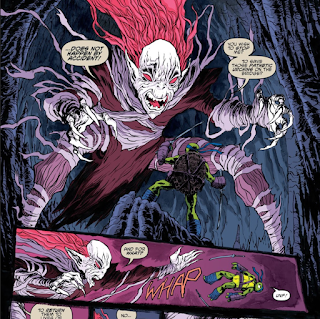 Suddenly, the Mousers and Flyborgs arrive, chomping their way through the vermin.  This surprise takes the Rat King off-guard and Leo summons up his Astral powers to slice Rat King in two with his spiritual energy blades.  Not truly injured, the Rat King releases his control on the children and announces his retreat (though vowing to return).  Leaping from the bridge, he vanishes into a Thin Place, leaving the Turtles with the task of finding a place for all the orphaned and lost children. 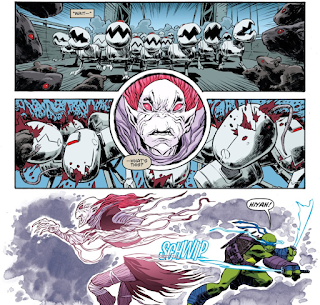 At Foot HQ, Jennika tells Master Splinter that Clan Hamato has come to visit.  Splinter finds his sons at the door, asking if the Foot Clan can take in the lost children.  Meanwhile, on TV, Baxter Stockman takes full credit for ridding the city of the rodent infestation as a public service.  He then formally announces his campaign for Mayor of New York City.

This was an excellent issue that unfortunately caps off a rather tedious story arc.  I've long-awaited a direct confrontation between the Turtles and the Rat King in the IDW series, ever since he was first introduced back in TMNT (IDW) #36.  He's menaced the protagonists quite frequently over the past four years, but in stories such as Casey & April and Pantheon Family Reunion, his shtick has consisted of hanging off to the side and offering smug comments while the heroes struggle with some other obstacle.  Getting the Turtles to actually throw down WITH the Rat King has been some rather delayed gratification (again, four years of waiting).

I wasn't disappointed with the encounter as depicted in this story.  In fact, I liked it quite a bit.  Rat King is a truly evil bastard, willing to toss kids off bridges and use them as pawns to fight the heroes.  He's immensely powerful and only withdraws from the fight because he just sorta feels like it, not because he has to.  Bringing the god-like entity down to earth for some fisticuffs didn't dissolve any of his menace or mystique, which I often wonder is why the creative team avoided using him in direct confrontations over the past almost-half-decade.

Leo's divide-and-conquer strategy doesn't work at first, and you wouldn't expect it to, but the reason Rat King backs down might come off as a little cheap.  Basically, the arrival of the Mousers startled him, and as Leo explains, the Pantheon doesn't like to be startled.  So... he retreats.  It's worded much better than that (they're control freaks who see mortals as pawns and the thought of pawns getting the better of their masters doesn't sit well with them), but that's essentially what it boils down to.  Someone shouted "BOO!" into his ear and he took off running.  While that might be a little underwhelming for a defeat, it is always nice to see these smug and condescending Pantheon villains taken down a peg.

No, this issue was perfectly fine.  But the whole of "Kingdom of Rats" doesn't add up all that well.  The Rat King spends 3/4 of it just puttering around, sometimes only appearing in one page a chapter, gathering up children for a devilish deed that is anything but clever.  The Turtles spend the arc trying to find a way to defeat the Rat King, but they don't even know what his evil scheme is (they don't learn about the kiddy genocide until the first page of this issue).  The Turtles are trying to thwart a master plan they don't even know exists and the villain is slowly building up his master plan which isn't very inspired or deep at all (he wants to kill the kids because, shit, I guess he's got nothing better to do).  And it all takes four issues.

What we get out of it is some expansion and characterization for a few more of the Pantheon, mainly Toad Baron and Manmoth, but I'm left with the feeling that instead of drawing "Kingdom of Rats" out into a four-parter, maybe they should've just done a pair of two-parters?  One with the Rat King being an asshole and one where the Turtles are brought into conflict with the Toad Baron and Manmoth?  Paced the way it is, the Rat King takes an awful long time to toss a bunch of ankle-biters off a bridge and as readers we had to wait four months for the telegraphed conclusion.

As an aside, I wonder if Astral Plane Leonardo and his glowing blue mystical energy swords were some sort of cross-promotion with the upcoming Rise of the TMNT animated series (and it's tie-in IDW comic)?  Probably a coincidence, but summoning mystic powers to turn his katana blades into glowing blue energy is apparently something Leonardo will be doing in the new cartoon.

The more interesting plot to come out of this arc was the further development of Baxter Stockman's villainy (or IS it villainy?).  April seems to be goading him into running for office, for whatever good she thinks she'll get out of that, and I have to admit that the idea of Mayor Baxter has its intrigue.

That ending was really awkward, though.  "Hey Master Splinter, sorry about getting into a bloody battle with you a couple issues ago.  Could you please indoctrinate these orphaned children into your abusive regime of godless assassins?  It's the right thing to do."

"Kingdom of Rats" had great art and several interesting encounters, but the pieces weren't assembled in a very exciting way.  The villain that the arc was named after does nothing for 3/4 of it and barely appears, while the heroes seek to thwart a scheme they don't even freakin' know about for most of the storyline.  And that scheme amounts to chuckin' kids in a river.  It was about two issues of story, but stretched out because we're biding our time until TMNT #100, I guess.