Monsters are the Rage! 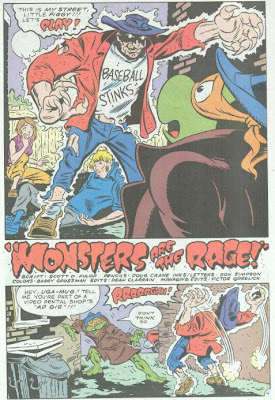 “Monsters are the Rage!”

It’s autumn in New York and Michaelangelo races across the rooftops, hellbent on acquiring a Chicago-style deep dish pizza from a new parlor. Returning home after dark, however, he spots a woman being menaced by clawed villain in a hat. Mike attacks the slasher, but nothing can hurt him. Eventually, the fiend vanishes.

Down in the lair, the Turtles and Splinter watch a commercial for April’s latest series focusing on attention-seeking children lashing out at the world. As Leo tries to explain the difference between New York and Chicago-style pizza to Splinter, Mike returns home with the frightening news. Don suspects it may be one of the Shredder’s robots Mike fought, but Splinter is convinced that their foe is magical in origin. 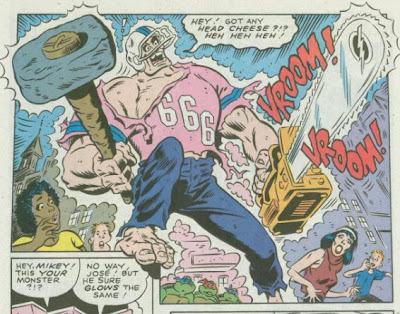 For the next three nights, the Turtles patrol the streets after dark. Eventually, they encounter a chainsaw-wielding madman obsessed with “headcheese”. The creep trounces the Turtles and then vanishes into thin air. For the next few nights, the results are the same; a weird monster appears, the Turtles can’t hurt it, then it disappears. They call Splinter in and he explains that in his meditations, he met a powerful young mind in the astral plane. The young boy has a mutant brain that brings his subconscious thoughts to life. The only way to stop the monsters is to find the boy. 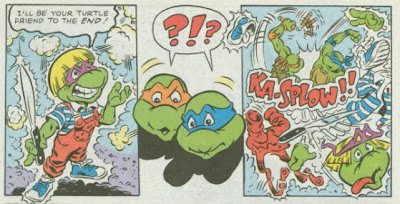 Since April’s been dealing with emotionally scarred kids, the Turtles go to her for help. The following midnight, they get together and follow Splinter, who psychically tracks the boy's thoughts. They end up outside his apartment building, where a legion of monsters guard the door. The Turtles take on the creatures as Splinter and April sneak inside. Breaking into the apartment, they find the place a vortex of madness. Fighting through a cyclone filled with the monsters, they reach the bedroom and the young boy, trapped in a nightmare he cannot control. April recognizes the boy as an introvert she met while covering her story and fears he may be internalizing his pain, which combined with his mutant psychic powers, have caused him to subconsciously lash-out in his sleep by creating violent monsters.

Suddenly, the boy’s mother comes home. April tells her that the only way to wake the boy is to try and reach him emotionally. She asks the mother if there’s anything that’s causing him so much psychological trauma. Weeping, the mother admits that she has been abusing her son. After his father died, she was forced to take two jobs to make ends meet. Unable to afford a sitter, she left him alone to watch TV unsupervised while she worked nights. Always exhausted, she began taking her frustrations out on her son; yelling at him and ignoring him. Rather than lash out, he internalized his anger and these manifestations are the result.

Fighting through the maelstrom, the mother grabs her son and delivers a tearful apology. He wakes up and the monsters disappear. As April and Splinter leave, Splinter says that with the source of his pain gone, the boy will no longer create monsters in his sleep. In a few years, when he grows up, he will have control of his powers and Splinter hopes to teach him to use those abilities to better mankind. 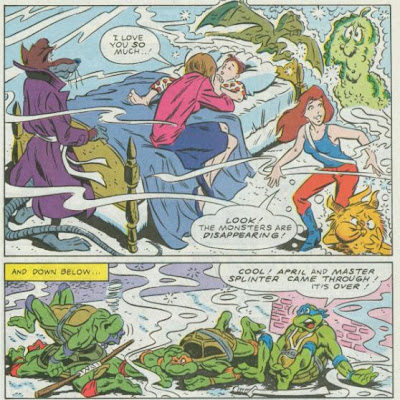 Reuniting with the Turtles, April fears that they’ve only won a battle and not the war, as there are other kids out there being abused in much the same way. Splinter hopes that families the world over learn a lesson from what has just happened and that abuse can be conquered by the goodness of one’s heart.

Epilogue: Still in the moonlit graveyard, Raph thanks everyone for reading and reminds them that next issue features Cudley the Cowlick and some other weird stuff. Suddenly, a zombie bursts out of the ground and chases Raph down. It hands him a letter, reminding readers to write-in to Archie with their requests. The zombie has a request of his own: More gore!

*The Turtles fought a different parody of Freddy Krueger named “Creepy Eddie” in the Fred Wolf episode “Nightmare in the Lair”.

This was definitely the stronger story in TMNT Adventures Special #3, wrapping its life lesson in an exciting story filled with monsters and madness. As a horror movie fan, I got a kick out of all the 80s slasher parodies showing up; everyone from Freddy Krueger to Leatherface to Chucky. Scott Fulop shows that he knows his stuff, lifting lines straight from the movies and throwing in obscure trivia (“Headcheese” was the working title of the original “Texas Chainsaw Massacre”).

So far as the lesson goes, the ending is a bit sappy, when all the characters get together on the rooftop to summarize what they’ve learned, but the actual moral is an important one and a refreshing break from the environmental awareness stuff. There are a lot of assumptions early on in the issue about children that either behave badly or are shy and introverted. The Turtles joke about their being spoiled or bratty or attention-obsessed and brush the idea of misbehavior aside as a shallow sort of thing. These are the heroes of the story, I might add, so you can imagine readers nodding along with the assessments of the protagonists.

That makes the actual ending all the more shocking, when you learn that the source of the child’s lashing out wasn’t anything born from greed, but from neglect and abuse at the hands of his mother. It’s very well-written and speaks to a major social issue that was as relevant then as it is today; the idea of raising your kid on television.

Personally, I grew up on a steady diet of horror movies and scary stories and those things have become my passion as an adult. But I was only allowed to watch and read those things when I was little because my mom knew I could handle it; they didn’t give me nightmares (very often) and I didn’t imitate anything I saw, read or heard in public. Not every kid is the same, however, and some children can’t handle those sorts of things. Rather than blame the source media, this story points the finger at parental neglect, and that’s a lesson I can fully appreciate. It isn’t Marilyn Manson’s fault Columbine happened, but the parents who never paid any damn attention to the emotional development of their children.

Because of the nuttiness inherent in this story, artist Doug Crane gets to go positively bonkers with the pencils, crafting all manner of bizarre and surreal critters to populate the pages. Though his style has a decidedly cartoonish quality to it, he fits this type of story perfectly and brings a lot of motion and energy to the pages.

While it’s easy to write this one off as just another “educational” issue, it works the moral into a very entertaining story, which is really how it should be done. It earns points with me because it doesn’t blame violent media for a child’s misbehavior, but parents who let their children watch violent media; and that’s a lesson I think needs to be broadcast much, much more often.

Grade: A- (as in, “And contrary to my encyclopedic knowledge of horror movie minutia, I haven’t a clue why Freddy Krueger is wearing a shirt that says ‘baseball stinks’ on it”.)