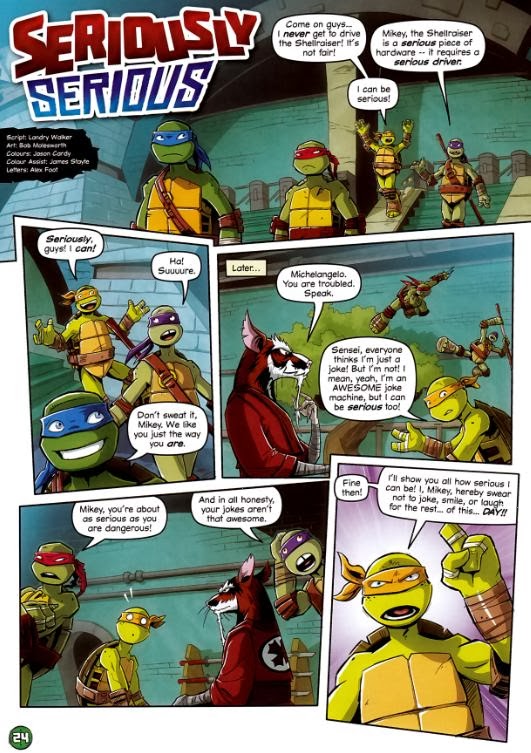 Down in the lair, Mikey begs Donnie to let him drive the Shellraiser.  Donnie insists that he isn’t serious enough to handle the responsibility.  Mikey vows before his brothers and Master Splinter that to prove how serious he is, he will not joke, laugh or even smile for the rest of the day.

7:00pm.  The Turtles are in battle with Dogpound and the Foot.  Dogpound is about to blast them with a gigantic gun when Donnie plugs the barrel with his staff.  The resulting explosion singes Dogpound’s fur into an embarrassing pattern, sending the villain running away with his tail between his legs.  Mikey keeps his cool. 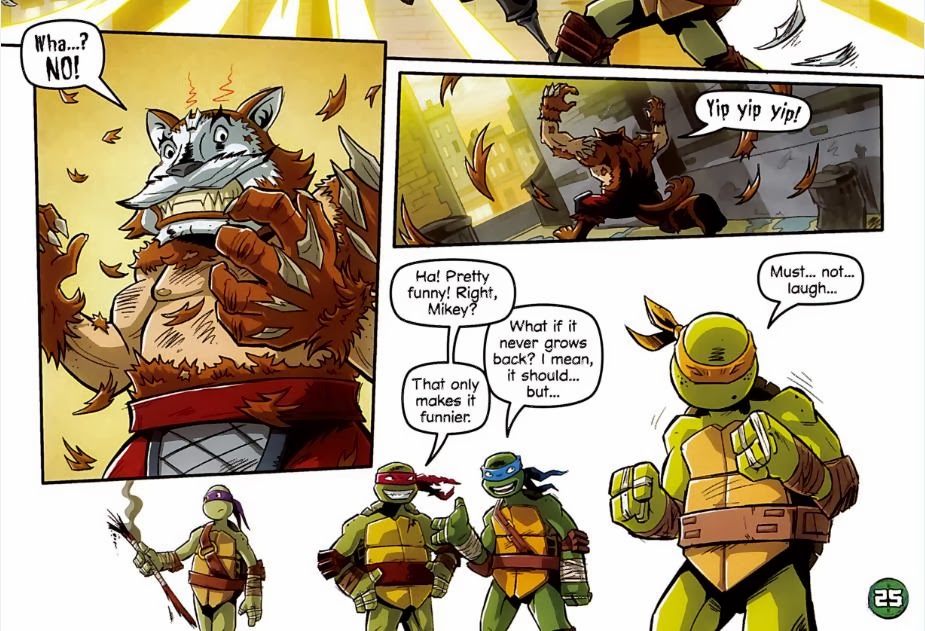 9:10pm.  In order to investigate a Kraang chemical plant, the Turtles each have to put on special gas masks of Donnie’s design.  Raph accidentally puts on a mask Donnie was designing for April, however: A mask that applies makeup.  As the lipstick-ed and mascara-ed Raph attempts to pound Donnie, Mike doesn’t crack a smile.

And so on for the rest of the night.  At 10:03pm, several Purple Dragons get lobsters stuck to their butts while attempting to rob a seafood restaurant.  At 10:30pm, Fishface’s cybernetic legs malfunction and begin kicking him in the face over and over again.  At 11:15pm, there’s an inexplicable glue-based explosion at a pillow factory, causing Leo to become covered in feathers.  And through it all, Mikey remains perfectly stoic.

11:57pm.  Back at the lair, the other Turtles are in awe that Mikey just might make it to midnight.  Splinter then enters the room and commands Mikey’s attention.  Splinter proceeds to hit himself in the face with a pie.  Unable to resist, Mikey collapses in a fit of laughter. 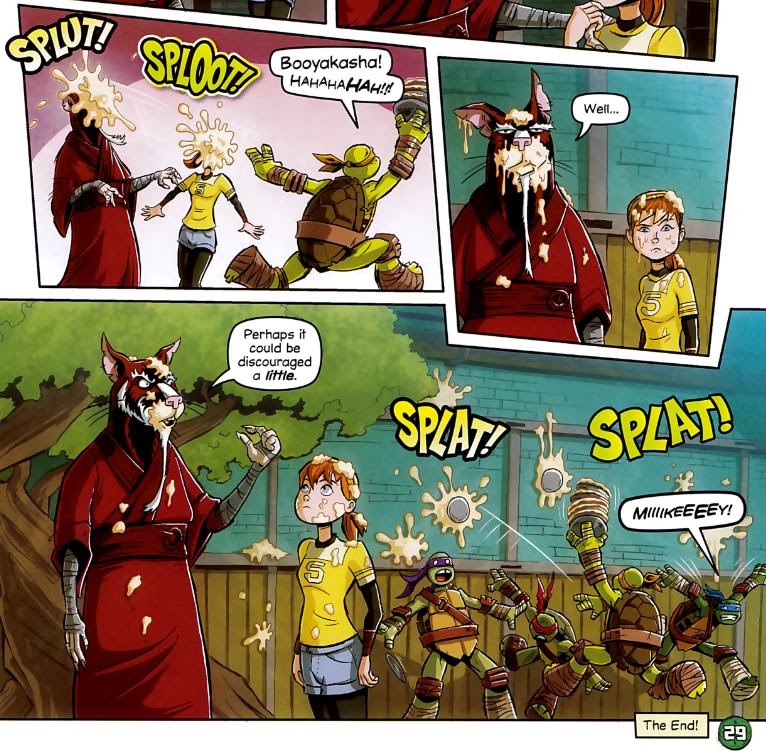 *This story is continued from “Robo Ninja”.  The story continues in TMNT Magazine (Panini) #10.

Walker's script for "Seriously Serious" is paced rather well, as the absurdities fate throws at Mikey to get him to laugh escalate gradually, cresting at a pretty great one-page montage of silliness.  Honestly, if you swapped Dogpound and Fishface out with Bebop and Rocksteady, this thing could have shown up in the back of a TMNT Adventures annual and it wouldn’t miss a beat.

If there’s one thing that sort of falls to the wayside, however, it’s an explanation as to just *why* Michelangelo’s sense of humor is an asset not to be discouraged.  He borders on obnoxious in the cartoon (and his tendency to cross that border depends on the patience of the individual viewer) and for all the world it seems like he really COULD stand to have his goofball antics discouraged.  The story is funny, but it doesn’t show any consequences for Mikey’s new attitude; the dynamic doesn’t really change nor the effectiveness of the team against enemies.

Heck, the other Turtles don’t even express any desire to hear Mikey’s jokes or for him to return to normal.  Leo prods him throughout the story whenever a goofy pratfall occurs to see if he’ll laugh, and in the second to last page the Turtles are all hovering over him in astonishment that he might make it to midnight, but no dialogue along the lines of, “I want the old Mikey, back!” or “It’s just not the same without Mikey’s corny hijinks!”

But.  You know.  6 pages.  You work with what you got.  And for a very short comedy relief piece, it wasn’t bad at all.

Grade: C+ (as in, “Can’t really think of what Mikey wasting smoke bombs and giving away his team’s position during stealth missions with his stupid antics brings to the table on a positive level.  And I guess the writers couldn’t, either”.)
Posted by Mark Pellegrini at 12:16 PM

Mikey's sense of humor shows during his creativity in fighting, although it may not always be effective. In one of the season 1 episodes, Splinter tries to teach Donatello not to overthink his moves while fighting, and he actually points this out as one of Mikey's strengths and qualities.

And I guess he could use his 'obnoxiousness' as a weapon too, kind of like Spongebob would do to annoy the crap out of his adversaries. They are part of the Nickelodeon family now, anyway...