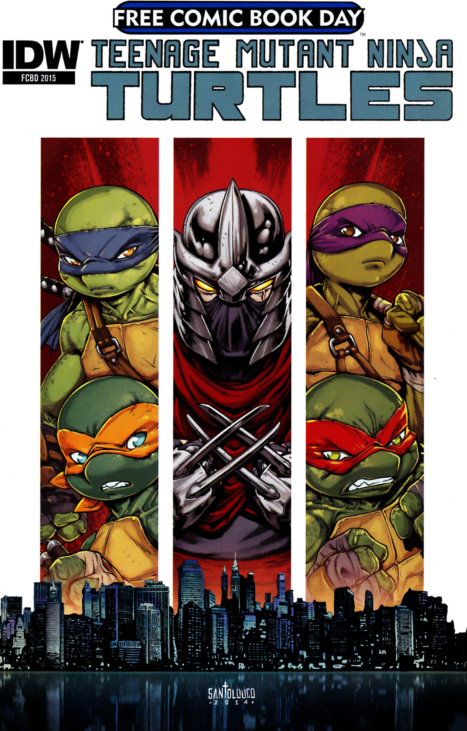 Down in the lair, Splinter tends to the badly injured body of Donatello, whose mind remains separated and trapped in the robot Metalhead.  Splinter reflects on how he’s dedicated both his human and mutant lives to his principles, and how that has cost him so dearly time and again.  He sees Donatello and the sacrifice he made for his father and for the world and vows to do everything in his power to see his son well again. 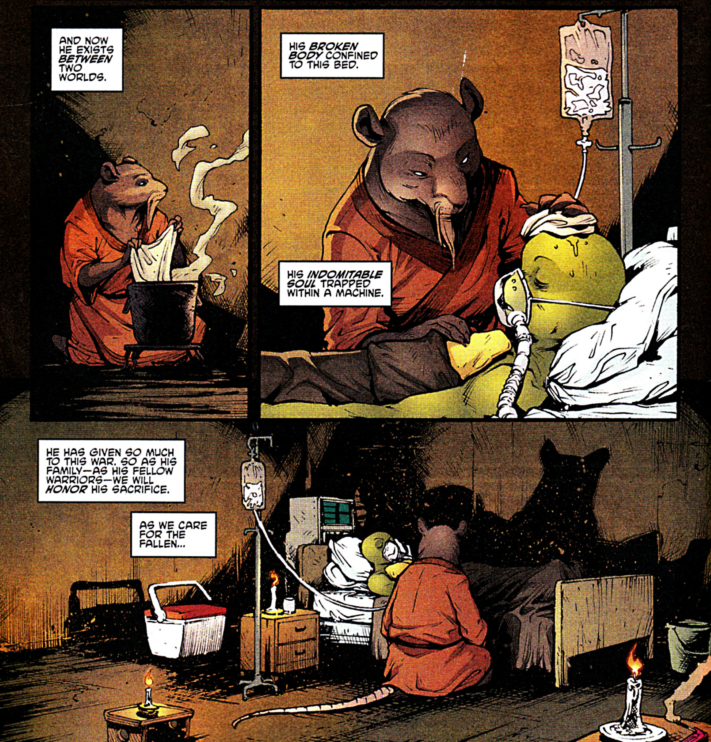 On a rooftop, Leonardo, Raphael and Michelangelo watch a Purple Dragon gang rally in the streets.  Evidently, without Hun constantly watching over them like he used to, they’ve gotten rowdy and directionless.  The Turtles wonder if the Mutanimals might be of any help in quelling the riot, but apparently they’ve been lying low.

The Turtles reflect on all they’ve been through, from Leo’s transformation into Dark Leo, to the fall of the Savate, the rise of the Foot Clan and the battle of Burnow Island.  They think about all the allies who have helped them in their battles: April, Casey, Angel/Nobody, Harold, Alopex and even the Mutanimals.  And they need all the help they can get, what with Donatello trapped in Metalhead’s body and Karai swelling the ranks of the Foot Clan with mutants like Bebop, Rocksteady, Koya and Bludgeon.  Their only saving grace is that General Krang has been taken to a Neutrino prison and that Shredder is missing and presumed dead. 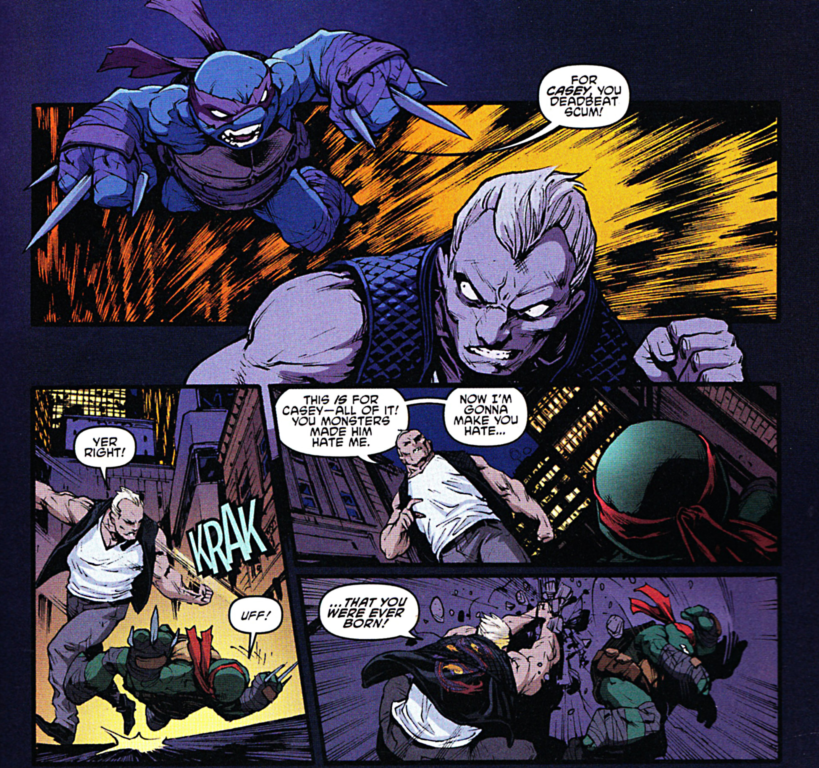 Below, the Dragons start destroying property and Leo figures they might as well beat some sense into them.  The Turtles leap down to the streets and begin trashing Dragons when Hun finally shows up.  He blames the Turtles for turning Casey against him and begins smacking them around.  Just then, Bludgeon and Koya show up, telling Hun that Karai wants to know why he deserted the fight at Foot Clan HQ.  The two mutants get distracted fighting the Turtles and Hun takes the opportunity to slip away. 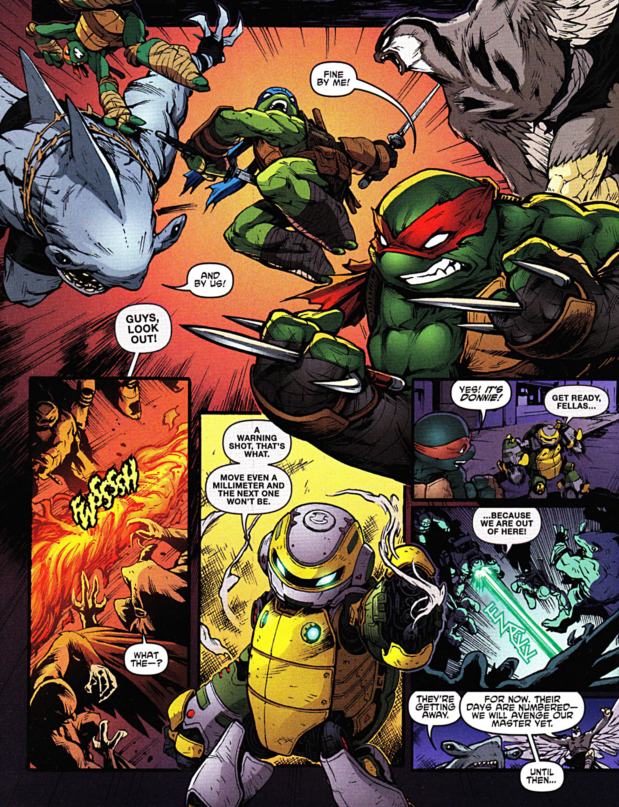 As things start to look bleak, Donatello/Metalhead arrives and uses his firepower to keep the hench-mutants at bay.  The Turtles escape, though Don loses control of Metalhead’s vehicle mode and crashes into an alley.  His brothers pick him up and tell him he’ll get the hang of Metalhead’s body sooner or later.  Don hopes to be in fighting shape ASAP, as he feels something big is on the horizon...

In a factory, the Shredder oversees Baxter Stockman as he builds an army of Mousers and Flyborgs.

Free Comic Book Day!  It’s like Christmas in May!

I don’t grab as many freebies on FCBD as I used to; just the ones that connect to the titles I’m subscribed to, which is admittedly very few.  Best to leave the rest of those goodies for the kids and see if they can get hooked.

FCBD giveaways vary from year-to-year, title-to-title.  Sometimes it’s all-new material, sometimes its selected reprints.  This year’s TMNT giveaway from IDW is a little of both, mixing recycled artwork and recaps with some brand new bookending sequences to give us a bit of fresh action.  It isn’t as lavish as their 2013 TMNT FCBD giveaway, which was essentially a completely original 22-page issue, but it’s pretty nice for what it is.  Better than straight reprints, anyway.

I’m not yet sure on the continuity of the thing; if it takes place between #45 and #46, or #46 and #47.  Bobby Curnow said the former, I think, and I trust the guy who edits and co-plots the book, though the presence of Hun conflicts a little with how he appeared in #45.

Eh.  I’ll wait until #46 comes out and if the continuity’s fucked I’ll change the Turtle Tips. (EDIT: Curnow clarified that it takes place during TMNT #46, so I changed the Turtle Tips.)

Now, as a recap issue, the dialogue used to contextualize all the flashbacks is stilted and clunky as heck.  A lot of awkward reminders about stuff none of the characters should be forgetting.  “Hey, remember how April’s our friend?  Yep, she sure is our friend.  Good ole April.”  But it is what it is.  I dunno who laid out the flashback pages, which are assembled from panels of art going back to the beginning of the title.  You get several different artists on the same page, but the layouts actually look pretty good, tessellating all those panels that weren’t meant to go together.

The fight with Hun, Bludgeon and Koya runs about 5 or 6 pages, though it’s more of a tease than anything else.  As soon as the fight with Hun starts to get good, the hench-mutants scare him off.  Then as soon as the fight with the Turtles and the hench-mutants starts to get good, Donatello/Metalhead creates a diversion and gets his brothers out of there.  But as a free sample book to get potential readers hungry for the $4 main course, it works perfectly well.

Now, if you missed out on this comic because you don’t have a local comic shop in your area or FCBD isn’t a thing in your country?  It doesn’t seem particularly essential to the narrative.  It’s mostly recaps and the fight doesn’t amount to much, sort of leaving everything where it was between issues so as not to disrupt any vital continuity.  We don’t really learn anything we didn’t already witness in #45: Donnie’s a robot, Hun’s having a falling out with the Foot, Shredder and Stockman are teaming up.

So don’t beat yourself up if you couldn’t find a copy.  The Santolouco artwork on the original pages is the real attraction, but there’s nothing storywise that can’t be skipped.