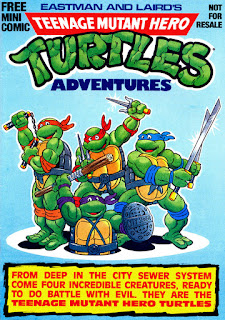 Reporting for the Channel 6 Happy Hour News, April explains why four turtles appear on the cover of this comic.  She relays the origin of Hamato Yoshi and the mutagen that turned him into Splinter and his four pet turtles into the Teenage Mutant Hero Turtles.  What's more, she recalls an epic gang war not long ago which the Hero Turtles helped squash... 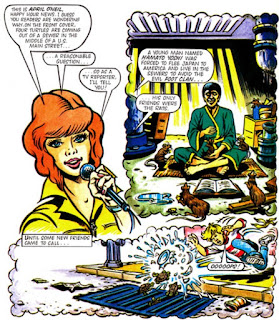 The Turtles happen upon a pair of gangs duking it out in a playground.  Not thrilled with this, they intervene and quickly use their martial arts skills to beat the ever loving shit out of them.

The battle spills out of the playground and into the streets, where the punks spy April and her news crew filming them.  They attack April, only to get beaten up by the Turtles.  April swoons, but the Turtles insist it was all in a day's work.  The city swoons, too, as the Mayor of New York throws a pizza party in honor of the Hero Turtles. 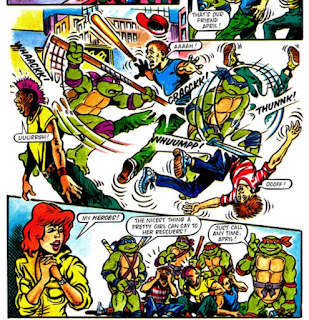 April ends her broadcast by reminding readers to pick up the ongoing Teenage Mutant Hero Turtles comic book, going on sale at the end of January with a new issue every fortnight.  Donatello pops in, too, informing readers that the first issue will come bagged with a free Hero Turtles badge.

*The series continues in TMHT Adventures #1.

*The next issue to contain original content and not an Archie reprint will be TMHT Adventures #15.

*Like most TMNT media released in the UK and other parts of Europe in the late '80s and early '90s, the word "Ninja" was exchanged for "Hero" in the title, as the British felt that the violent origin of the ninja were too dark for children's entertainment.

*Michelangelo's nunchakus appear in this comic, and will appear in the Archie reprint issues, but will be absent from all Fleetway-original stories moving forward.  As with the word "ninja", the British felt nunchakus were too violent for children's entertainment and had them removed (they were cut from the cartoon and movies, too).

*This mini-comic was packaged with several other Fleetway publications to promote the upcoming TMHT Adventures series.  Titles it was packaged with include "Eagle", "Whizzer & Chips" and "Roy of the Rovers".  I've never heard of any of them.

*This 7-page comic is an original creation.  Most issues of Fleetway's TMHT Adventures will be reprints of Archie's TMNT Adventures series.  The Archie reprints and the Fleetway original comics do not coexist in the same continuity, with the Fleetway strips typically being silly comedy relief stories that include Shredder and Krang long after they were eliminated from the Archie series.

So, let's talk about British comics.  They're a little... different from American comics, even when they're straight up reprinting American comics or adapting them for the UK.

My first experience with British comics was with Transformers and perhaps that set the bar a little too high.  You see, the Marvel UK Transformers title (written by Simon Furman) reprinted the Marvel US Transformers title (written by Bob Budiansky), but to keep from catching up with the American material, several issues would run original stories.  Those UK stories were painstakingly written around the continuity of the American stories, sometimes continuing forgotten plot lines or even fixing logistical errors.  It was a lot of effort on Furman's part, but it made the Marvel UK Transformers stories a fantastic supplement to the US material, often enhancing the narrative and adding depth to bit-part characters.

I thought ALL British comics were written like that.

I found out later that Furman was the only guy over there putting forth that sort of effort.  Most British comics that dealt in reprints of American stuff with occasional new material didn't give a flying fuck about continuity.  Take, for example, the Marvel UK Real Ghostbusters comic.  It reprinted the Now Comics Real Ghostbusters series along with original strips from British creators.  The British comics were all goofy comedy relief gag strips that sometimes contradicted the American comics they were printed alongside of.

Fleetway's Teenage Mutant Hero Comics is much the same; the original stories don't enhance the narrative of the Archie reprints, but choose to ignore them completely.  They're all going to be comedy relief gag strips, usually involving Shredder and Krang, and will have no connection to the Archie stuff whatsoever.

I mean, that doesn't make these comics TERRIBLE or anything.  Hell, even His Holiness Pope Furman XIII eventually gave the fuck up on maintaining continuity in Transformers.  His last batch of stories, the Earthforce stuff, is irreconcilable with the American stories.  And that doesn't make the Earthforce comics bad or anything, but now I'm talking more about Transformers than Turtles so I'll give it a rest.

That's just how the Brits do things and they're not in a hurry to try anything more complicated.

What IS interesting about these Fleetway comics, and something I mentioned in the Turtle Tips, is that despite being rebranded with the modified "Hero Turtles" name, they weren't censored to the same extent as the Fred Wolf cartoon or live action movies were.  Michelangelo uses his nunchakus and April freely uses the word "ninja" to describe the Turtles.  How the comics managed to escape Great Britain's harsh censorship practices, I don't know, but they did.

As for this issue, it's a gratuitous preview that was packaged as a free bonus with a bunch of other British comics I've never heard of.  I can't really judge it too harshly on content, though for something intended to get people to buy an upcoming comic they sure didn't put a lot of effort into it.

The creative team is uncredited, which is probably to their benefit, because they phoned this whole thing in like you wouldn't believe.  In addition to errors like Michelangelo having Leonardo's swords, there is a lot of art swiping.  Sometimes it's straight-up tracing and other times it's just a look-and-copy job, but it results in characters changing model wildly from panel-to-panel as the artist traces/copies from different sources.

For example, here's Michael Dooney's origin page next to the one seen in this mini-comic: 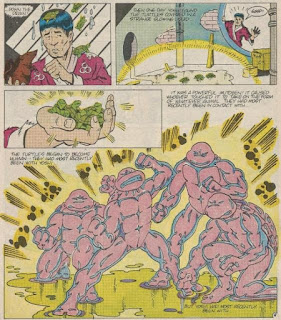 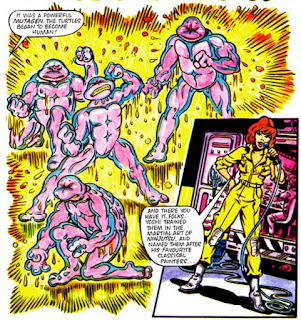 While cribbing art from the book you're promoting is perfectly understandable, some of the other sources for copied art are... baffling.  I mean, copying art from a cereal box? 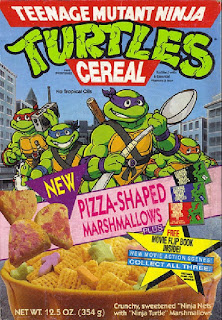 Whatever it takes to get the pages in before the deadline.

As far as my reviews of these Fleetway comics go, I'm going to have to confess that they'll be filled with gaps.  The UK stuff is surprisingly hard to find in the US and I'm missing a bunch of the original stories.  I'll cover what I can find, though.  The good news is that since they're all comedy relief gag strips, it's not like we'll be missing any vital chapters in the ongoing saga.

Posted by Mark Pellegrini at 9:55 AM

They did manage to draw a surprisingly good-looking April. She seems to be modelled after the Aprils drawn by Ken Mitchroney, Michael Dooney and Steve Lavigne.

And to their credit: their mutation sequence looks a lot better than my rendition as a eight-year old...

"Pope Furman XIII"
I see what you did there. :)

I know ultimately they didn't fit, but I recall a few Earthforce links to the main TF story. Actually I only recall the Mayhem Attack Squad (the ones killed off in the wolf trilogy are absent when the team turns up in the US comic), but I *think* there were other things too.

Back to the Turtles. This isn't great (actually its far from great), but given the popularity of the Turtles at the time, its only real job was to say "hey look, there's a TMHT comic coming out!" Pretty sure I didn't read this at the time, but just seeing an issue in the newsagents was enough to raise my interest. I actually dropped Transformers for it - something I soon regretted.

Don't know why i read there "Donatello POOPS in"... TWICE. Worst was that i really wanted to see that.

"Take, for example, the Marvel UK Real Ghostbusters comic. It reprinted the Now Comics Real Ghostbusters series along with original strips from British creators. The British comics were all goofy comedy relief gag strips that sometimes contradicted the American comics they were printed alongside of."

Wow, wow, the Marvel comic stories were far more entertaining than the monster of the week Now Comics version. I mean come on.

"Take, for example, the Marvel UK Real Ghostbusters comic. It reprinted the Now Comics Real Ghostbusters series along with original strips from British creators. The British comics were all goofy comedy relief gag strips that sometimes contradicted the American comics they were printed alongside of.

"Wow wow wow. The Marvel RGB was far more entertaining than the Now Comics with it's monster of the week stories. I mean come on.