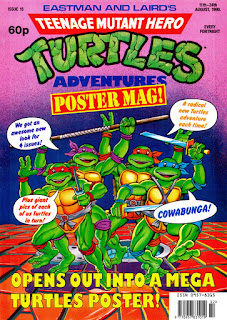 In the dead of night, Shredder, Bebop, Rocksteady and a unit of Foot Soldiers release a bask of crocodiles (I looked that up!) into the sewers.  But these aren't ordinary crocodiles, they're robo-crocs set to explode once they home in on the Turtles' lair.  April, doing a late night news patrol, sights Shredder but is captured by Bebop and Rocksteady. 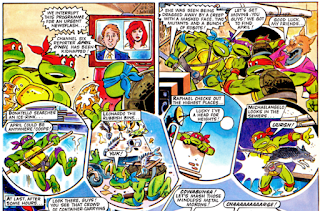 Down in the lair, the Turtles are enjoying some pizza when they hear a Channel 6 news report explaining that April has been kidnapped.  They split up to search for her: Donatello checks an ice rink, Leonardo a dumpster, Raphael a rooftop, and Michelangelo the sewers.  They eventually find a unit of Foot Soldiers in an alley and attack.  The Turtles make short work of the robots, but in the confusion Bebop and Rocksteady capture Donatello and take him back to the Technodrome.

They throw Donnie in a junk room with April, but Donnie figures he can use the spare parts to create a radio and call for help.

Meanwhile, the Turtles return to the lair to tell Splinter the bad news, but they're followed by a robo-croc.  It explodes, destroying much of the lair and burying the Turtles in rubble. 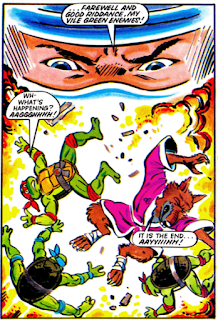 In the Technodrome, Donnie is about to complete the radio when Bebop and Rocksteady cart him off to see the Shredder.  April finishes the radio and contacts the Turtles and Splinter.  They dig themselves out of the rubble and fight the rest of the robo-crocs, destroying them before they can explode. 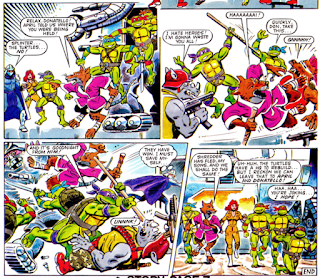 As they return to the surface, Michelangelo gives Donatello the bad news that the lair's been destroyed... but he suggests the resident genius can rebuild it in no time.  Donatello doesn't think the joke is very funny.

*The poster in this issue was of Leonardo.

While this isn't the first original comic to come from Fleetway, it's sort of the first "real" one.  The comic in the preview special was just an origin recap and an extended advertisement for the upcoming series, while this comes across as a bit more of a legitimate story.

Being from the UK, it has some weird oddities to it.  British-isms are to be expected; I actually think it's kinda funny seeing four Turtles from New York chatter like limeys.  So that's not what bugs me.

No, it's that writer/artist Massimo Belardinelli didn't seem to be entirely sure who the leader was supposed to be.  Michelangelo, by all visual evidence, is the Turlte in charge throughout this story.  When the Turtles find the Foot Soldiers in the alley, he's the one who leads the charge.  When they return to the lair defeated, he's the one who breaks the news to Splinter and is given the pep talk by their master.  When April radios them for help, he's the one who rallies the others to action.  All the while, Leo just sort of shuffles around in the back, following Mikey's lead.

I wonder what made Belardinelli think that?  I noticed that with some of the foreign TMNT comics, the writers seemed to have different ideas on who the leader should be (while being oblivious to the theme song lyrics, apparently).  Back when I translated the Japanese Super Turtles manga, Donatello seemed to be the one giving orders, particularly in the first volume.  Was it because he was portrayed as the smartest Turtle who designed all their vehicles and gadgets, so of course he should be the leader?  Or did the writer just fuck up?  I dunno.

In the case of this UK comic, I think Belardinelli may have thought Mikey was in charge because he was the "mascot" Turtle.  Back in the day, Michelangelo was the one that acted as the face of the franchise, dropping all the catchphrases and playing all the tropes associated with the brand to excess.  So I wouldn't be surprised if a creator, not particularly enamored with what was likely a quick paycheck type of assignment, would interpret the "star" as also being the "leader".

BUT I HAVE ANOTHER THEORY.  In the UK, Michelangelo's nunchakus were edited from the cartoons and movies, and weren't included in the Fleetway original comics (though remained present in the Archie reprints).  It could be that to someone unfamiliar with the Turtles, seeing all the other characters fight villains with weapons except one lone individual SO BADASS he can take down Shredder and the Foot with his BARE HANDS... Clearly, that Turtle must be the leader.  And that Turtle was Michelangelo. 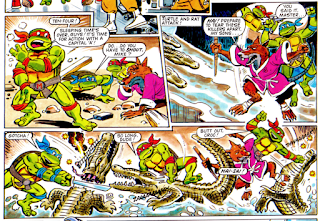 Or maybe the guy who made this comic just fucked up.  I'm trying to fill out a Word page or two, here.  I need content.

Anyway, the story is the typical UK stuff where everything happens way too fast and is punctuated by dry puns, but I like Belardinelli's art.  Something about the way he draws Rocksteady's helmet drooping over his brow to make him look more menacing; it reminds me of how Dave Garcia would draw him in the Archie series.  He also doesn't trace his own facial expressions and poses like a lot of the later Fleetway artists do (especially the cover artists), and that's greatly appreciated.

And lastly, did the Shredder... kinda WIN in this issue?  I mean, the Turtles lived, but he did successfully destroy their lair.  They didn't destroy the Technodrome, so technically Shredder's still got a roof over his head while the Turtles have been rendered destitute.  Hey, good for him.  He was bound to win one sooner or later.

Posted by Mark Pellegrini at 11:34 AM

So glad to see you started on these! I'm gonna be very happy to have a one-stop resource for UK Turtles comics. Let me know anytime I can help with rounding up source material.

Also, your theory about Michelangelo is now UK canon, in my mind. :-)