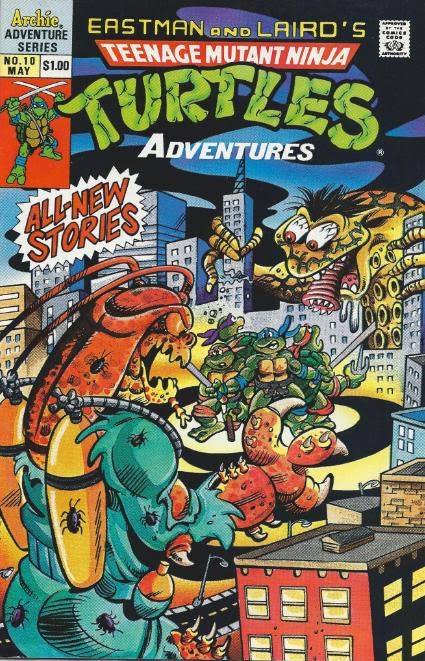 Some time ago, Bebop and Rocksteady apparently decided to dump some of the Shredder’s toxic waste into the sewer, unaware that it would encounter a Norwegian flatworm and have a terrifying effect on it.

Present day, back at the Turtles’ lair, Leo feels compelled to tell Splinter all about the events of the past few issues. After unloading all the exposition he can muster, Leo tells Splinter that he’s worried about the so-called “final conflict” he and his brothers are to be involved in, but is more worried about Krang. Screwloose’s description of how Krang invaded and exterminated all the people of Huanu really got to him, it seems. Splinter recommends that to reach Krang the Turtles must first find his associate, the Shredder. As the Turtles head to Shredder’s last known whereabouts, his old submarine base, Splinter stops Raphael and asks him why he’s now wearing his black wrestling costume. Raph replies that it can come in handy during battles in the dark. Splinter remarks that Raph is becoming very wise, much to Leo’s jealousy.

At the Shredder’s secret headquarters, a sub-sub-basement concealed as “Saki Inc.”, an exterminator arrives to deal with the Shredder’s recent roach problem. The exterminator gets busy in the storage room as Shredder contacts Krang in Dimension X, who is busy razing another inhabited planet to the ground. Krang remarks that the one thing he wants most of all is the Turnstone. Shredder asks how he can get in on that action and Krang begins to set up a deal with him.

Back in the supply room, the exterminator corners a pesky roach, only to have it bite him on the thumb. The exterminator chases after the bug, only to slip on the wet floor and tumble down an open manhole into the sewer, which just so happens to be contaminated with more of Shredder’s mutagen. 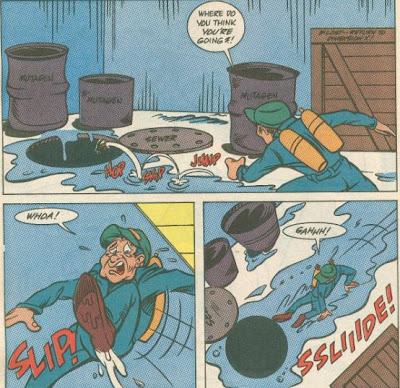 Over at the Shredder’s old abandoned submarine base, the Turtles ponder which way to search for their foe’s new headquarters. They decide that since they last encountered Bebop and Rocksteady beneath Times Square, then Shredder might possibly be hiding out somewhere between the submarine base and there.

As the Turtles head down the sewers, Mike develops the paranoid notion that something creepy and yellow and gross is stalking them. He’s right, but before they can figure out what’s lurking behind them, they encounter the monster that pops up in front of them: the mutated exterminator now known as Scumbug! The unhinged Scumbug thinks the Turtles are all big green roaches and intends to exterminate them, but encounters competition from the mutated flatworm, now calling itself Wyrm! 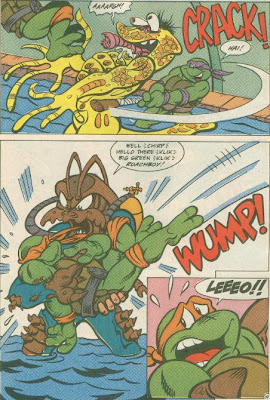 With the Turtles caught in the middle, Scumbug and Wyrm do battle. Wyrm proves the stronger of the pair and overpowers Scumbug. He begins to suck the blood from Scumbug’s veins with his prehensile tongue, unaware that their tussle has ruptured a gas main and released a couple of live wires. The Turtles huddle-up, using their shells as protection, just as the live wires ignite the gas.

Scumbug and Wyrm vanish in the explosion, leaving four smoking Turtles behind. As the Turtles regain their senses, they find themselves surrounded by an unusual number of rats…

*Scumbug and Wyrm will appear again in TMNT Adventures #52.

*While Scumbug’s origin as presented here is more or less identical to his toy packaging bio, Wyrm’s deviates considerably. His toy describes him as a former garbage man who slipped into Shredder’s dumpster; the residual ooze and other nasty elements morphing him into the grotesque Wyrm. It was also described that his only friends in the world were Muckman and Joe Eyeball (neither of which appear in TMNT Adventures).

*Mary Bones hinted at the “final conflict” in TMNT Adventures #6.

*Raph got his black wrestling outfit in TMNT Adventures #7.

*This issue was reprinted in the UK by Fleetway in TMHT Adventures #13.

As with last issue, this one features another in-your-face “buy new toys!” plot. However, unlike the previous issue, this story follows up on a number of threads going all the way back to TMNT Adventures #5, tying many of the events together nicely. I honestly didn’t expect Shredder’s submarine base to be revisited again.

As for Wyrm and Scumbug, they’re about as generic as villains get. Personally, I didn’t think the exterminator really deserved such a gruesome fate, but hey, they’re all just comic book characters in the end.

One thing I’ve been enjoying is how Krang has started being built up as a genuine warlord and intergalactic conqueror. In the cartoon, he was typically relegated to the role of Shredder’s bickering partner and mad scientist. Granted, the cartoon was pretty devoted to humor, but I always felt that an inter-dimensional warlord with an army of Rock Soldiers should have been more of a threat. What really caught my eye was how Krang was seen multi-tasking in this issue. Rather than being his partner and equal, Shredder is presented as simply one of Krang’s agents who reports relevant activity occurring on Earth. Definitely a better take on the character and his relationship with Shredder, while still maintaining all his goofy quirks.

One final item to note is that this is actually the very first issue of TMNT Adventures I ever bought and read, so because of that, I have a certain nostalgic appreciation for it.

Grade: B- (as in “Blood-sucking worms and roaches still have a better command of the English language than most gangsta rappers”.)