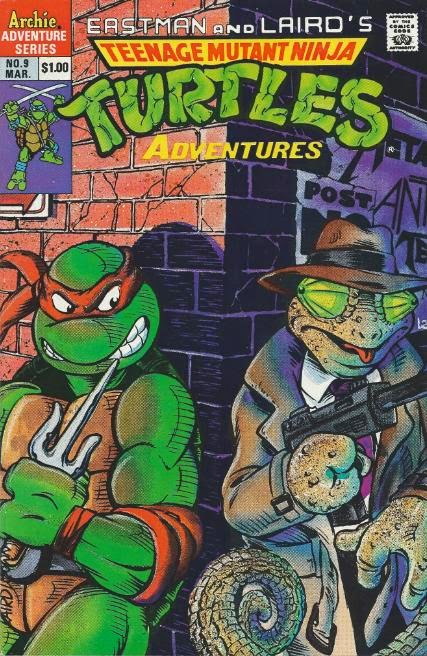 Down in the Turtles’ lair, their evening of television viewing is interrupted by Splinter, who recommends they go patrol the sewers and maybe pick up some groceries on their way home. The TMNT grab their weapons and head out, as the crafty sensei takes their place in front of the tube. 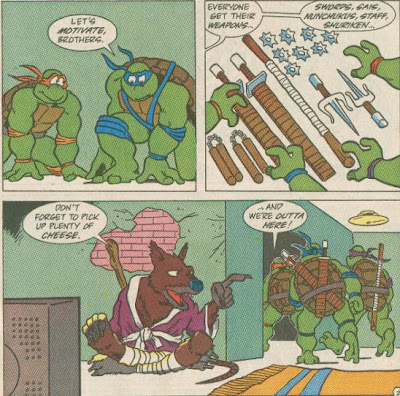 Anchorwoman for the Channel 6 news, April O’Neil, breaks the story of some top secret U.N. weapons plans stolen by a mysterious lazy-eyed double agent called “Codename: Chameleon”. The weapon is supposedly an even greater threat than an intercontinental ballistic missile. April reports that Chameleon was last seen near Times Square.

In Shredder’s HQ, the nefarious villain watches the news and becomes obsessed with the thought of obtaining those weapons plans. Shredder dispatches Bebop, Rocksteady, a Foot Soldier and a Foot Knucklehead to go retrieve the Chameleon, swearing that if they fail again, he’ll subject them to further genetic experimentation.

Outside Times Square, the Chameleon is on the run from the police. He manages to lose them by ducking into the sewers, only to stumble across the Turtles. High-tailing it in the opposite direction, he finds himself staring Bebop and Rocksteady in the face. With nowhere to run, Chameleon hides the weapons plans in a crack in the wall and surrenders. The Turtles attempt to rescue Chameleon from Bebop and Rocksteady, but become occupied with the Foot Knucklehead: a many-armed robotic killing machine. Leo manages to slice the Foot Soldier commanding it in half, but the evil mutants escape with Chameleon in the ensuing chaos. 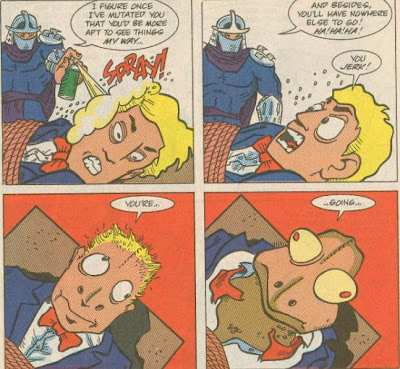 Back at their HQ, Bebop and Rocksteady return with Chameleon. Shredder straps Chameleon to a table and drops a real live chameleon on his face. He threatens the spy with a canister of mutagen, telling him that if he does not give up the weapons plans he will mutate him into an actual chameleon. Chameleon yields and reveals the whereabouts of the plans to Bebop and Rocksteady, who leave to retrieve them at once. However, with Shredder being evil and all, he decides to mutate Chameleon anyway, hoping to force him into his services afterward. The now reptilian Chameleon breaks his bonds and uses his camouflage abilities to sneak away from Shredder. 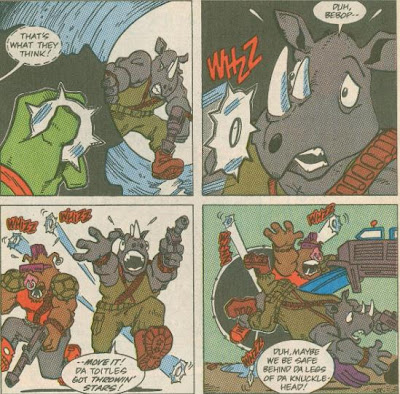 Later that night, April reports on the Channel 6 news that the weapons plans were returned to the U.N., burned beyond recognition, with a note scribbled on the envelope reading, “Some things are not worth profiting from”. A now trench coat-clad Chameleon observes the news from outside a TV store and remarks, “You might say I’m beginning to see things differently now”.

*Between this and next issue, the events of "Yo-Ho-Ho! And a Bottle of Mutagen!" and "Doomsday Hassle in Banshee Castle" take place.

*The cover is an homage to that of Raphael (microseries) #1, with Codename: Chameleon in the place of Casey Jones.

*This is the first time the Foot Soldiers have been used in any capacity since TMNT Adventures (miniseries) #3.

*The fate of Bebop and Rocksteady will be revealed in TMNT Adventures #11.

*The Foot Knucklehead was available as a toy from Playmates and is much closer in design to its plastic counterpart in the pages of this book than in its appearance in the cartoon series (“Casey Jones: Outlaw Hero”).

*A 2-page epilogue was added to this issue in the TMNT Adventures Vol. 1 collection from Tundra.

*This issue was reprinted in the UK by Fleetway in TMHT Adventures #12.

Another “mutant of the month” story, this issue is one of the weaker installments in this story arc as it really doesn’t provide much of anything. Codename: Chameleon wouldn’t prove to be particularly popular with anybody and won’t be seen again for a very long time, making an entire issue dedicated to his introduction rub off as kind of worthless. The only plot-point introduced in this issue that will be touched upon in this story arc is Bebop and Rocksteady’s entombment, but there must have been a more productive way to make that happen.

If anything, this issue reeks of “blatant toy advertisement” more than any other, as the Foot Knucklehead takes center stage. It might as well have had “buy me!” written on the side. Chameleon, oddly enough, never received a toy from Playmates.

Jim Lawson once again interrupts Ken Mitchroney’s artwork for a fill-in. As I’ve said before, his art tends to fluctuate wildly in the quality department, ranging from detailed to not-so-much at the drop of a hat. To his credit, he’s always been able to draw a really slick Shredder, though that might be more to the credit of Shredder’s bitchin’ character design than anything else.

Anyhow, I wouldn’t be so cruel as to call this issue “pointless”, but it is fairly uneventful and has little effect on the grand scheme of the storyline.

Grade: C- (as in “Chameleon’s toy probably would have just had a lame ‘changes color when splashed with warm water’ feature, anyway”.)
Posted by TMNT Entity at 10:10 PM