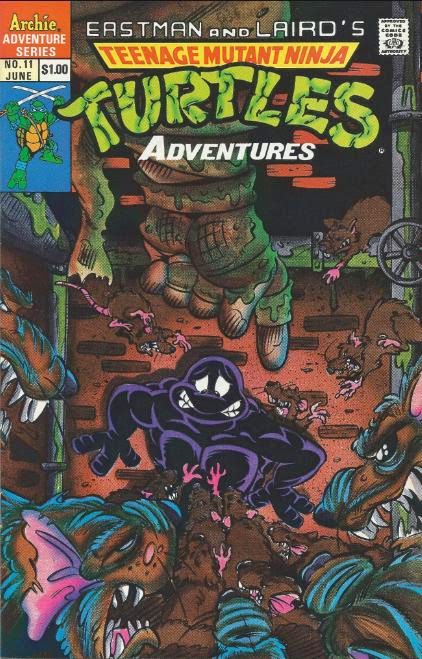 Bebop and Rocksteady have been buried alive for three days, but just when things start to get awkward, the pair find themselves bathed in a strange white light and rescued by four grey aliens.

Elsewhere in the sewers, the Turtles are perplexed by the alarming number of rats gathering around them. The rats seem to be herding them in a specific direction, and not wanting an unnecessary battle, the TMNT follow. The rats lead them to their master, Ha’ntaan--the Rat King. The Rat King asks why they trespass in his kingdom and considers feeding the Turtles to his subjects. Leonardo implores his forgiveness, explaining that they entered his kingdom out of ignorance while in search of the Shredder and Krang. The Rat King mulls over Leo’s statement a bit and decides to let them leave, pointing them in the direction of Shredder’s hide-out. Raph is suitably ticked that Leo acted like such a pushover, but Leo tells him that he thought it wise to avoid a fight if possible. 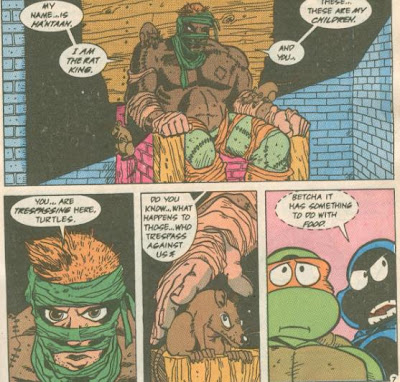 Following the Rat King’s directions, the Turtles eventually stumble across the place where they last encountered Bebop and Rocksteady, only to notice a smoking crater where the two mutants had once been buried. Pursuing the trail even further, they soon discover canisters of mutagen dumped into the water, indicating their destination is near.

Not much further ahead, the Turtles bump into a freaky Foot Super Soldier guarding an open manhole. The ultra-violent Super Soldier activates and engages them in battle. The Turtles don’t fair too well at first, with the Super Foot Soldier constantly blasting them with eye-beams. Mike sees this as an opening and flings two shuriken into the robot’s eye sockets. The Super Foot Soldier then topples over into the water, defeated. 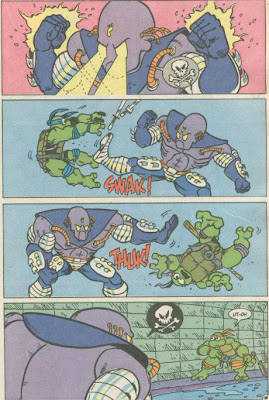 As the Turtles climb through the open manhole, they find themselves in the supply room of Shredder’s hideout. Before they can face their foes, though, the strange grey aliens sneak up behind them and use their white light abilities to put them to sleep.

Shredder, Krang, Bebop and Rocksteady chuckle over their victory, as Krang compliments the Sons of Silence (the grey aliens) for their effectiveness. Krang then unveils his newest piece of technology: a device capable of locating the Turnstone. Apparently, Krang received it from the ruler of a far-off world in exchange for the life of his planet. Krang, being the swell brain that he is, decided to take both. As Krang activates the device, he sees that the Turnstone is located somewhere in the Bayou.

Down in the Bayou, Mary Bones looks into the Turnstone and witnesses Krang’s latest scheme. Realizing that the final conflict is approaching, Mary Bones uses the Turnstone to transform herself back into her original form and vacates the planet. However, she won’t leave alone. 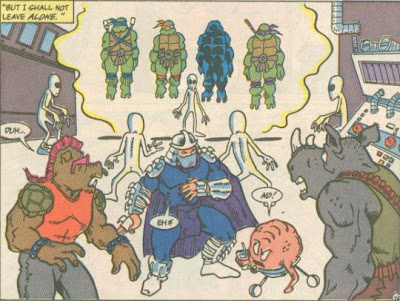 Back at Saki Inc, the Turtles are enveloped in a strange glow and vanish. Looking into his machine, Krang discovers that Mary Bones, the Turnstone and the Turtles have all been transported to Dimension X. Krang is far from worried, however, as he has converted the Technodrome into a spaceship and left it in orbit above Earth. Krang commands his cohorts to gather their things and the villains take off for Dimension X.

*Bebop and Rocksteady were buried alive in TMNT Adventures #9.

*Mary Bones was last seen (outside of flashbacks) in TMNT Adventures #6.

*The Rat King won’t be seen again until TMNT Adventures #43.

*Though his behavior in this issue might appear to be strange, the back of the Rat King’s toy card identifies his allegiance as neutral. This aspect of his character would occasionally rear itself during the cartoon series (“Return of the Fly” being a prime example), as well.

*Another Foot Super Soldier will appear in TMNT Adventures #18.

*This issue was reprinted in the UK by Fleetway as TMHT Adventures #14.

So the conclusion of this story arc kicks into high gear starting with this issue. The build-up to this climax has been fairly good, save for maybe a few rough spots along the way. I especially liked Clarrain’s (Murphy's) use of the Rat King in this story. No epic fight of any kind, just a civil discussion that ends in a peaceful yet suspicious resolution. Some might feel disappointed that the TMNT and the Rat King don’t throw down, but I actually thought that this turn of events was a real surprise and a welcome change of pace from “solve all your problems by punching the guy in the face”. I suppose my only regret is that the Rat King is hardly used again in the series, making his appearance here feel a little superfluous.

Jim Lawson’s on art duty again, but it’s actually a fitting appearance. You see, Lawson penciled the Rat King’s first ever appearance back in Mirage’s Tales of the TMNT (Vol. 1) #4. Rat King’s design is wonderfully creepy and Lawson has always been the best when it comes to drawing the guy (and outside of Chris Allan, he’s pretty much the only one who has drawn the guy).

Overall, this is a very unusual issue of the series and all the better for it, I say. While Rat King doesn’t really serve any major purpose to the story, he does make for a wonderful scene.