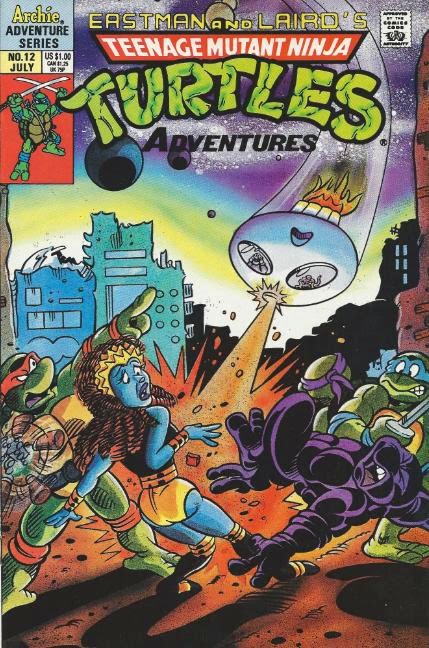 Onboard the modified Technodrome, Rocksteady is having a dream about living peacefully in Africa as a normal rhino. Bebop awakens him as Krang swoops into their destination: Dimension X and the location of the Turnstone! 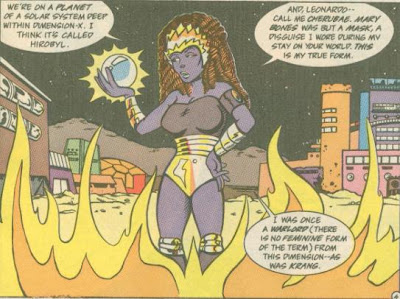 On the wasted planet Hirobyl, Mary Bones, now in her true, shapely form known as Cherubae, explains the situation to the TMNT. It seems that both she and Krang were warlords of Dimension X, however, the theocracy of Dimension X eventually banished all warlords. After losing his body, Krang chose to go into hiding and plan berserker assaults, while Cherubae chose to live peacefully on Earth and guard the Turnstone: an ancient device supposedly created by the first woman which can transmute matter into anything the possessor wishes. Cherubae asks the TMNT to help her in the forthcoming battle and they agree.

No sooner does she receive their agreement, Cherubae spots the Technodrome entering Hirobyl’s orbit. She flies into space to meet Krang, transmuting his Turnstone-tracking device into a pet bird for Rocksteady. Krang counters by first blasting Cherubae with X-Ray lasers then shocking her hard enough to make her drop the Turnstone and float away, unconscious.

On Hirobyl, the Turtles witness Cherubae’s defeat and head after the lost Turnstone. While this is going on, the Sons of Silence abandon Krang and disappear with Cherubae. Frustrated, Krang dispatches Shredder, Bebop and Rocksteady to locate the Turnstone on modified Footskis, then leaves to gather more help. 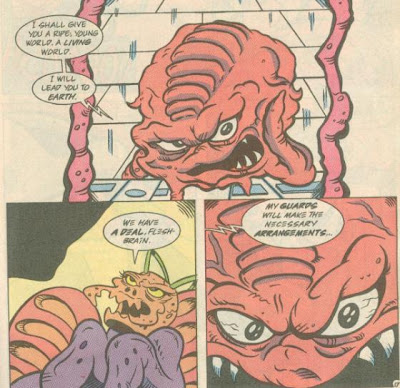 Krang contacts the representative of the alien bug-queen, Maligna. Maligna grants Krang an audience and the two strike a deal: Krang will lead Maligna to Earth, a planet full of juicy morsels, if Maligna lends him ten of her “children” to aid in his latest endeavor. Maligna accepts the terms.

On Hirobyl, Shredder and his goons search for the Turnstone by air. Shredder remarks that once he finds it he intends to use its power to overthrow Krang and destroy the Turtles.

On the ground, the Turtles come out of hiding and continue on foot. They eventually reach a coliseum where they’re greeted by none other than Cudley the Cowlick. Cudley says that Mr. Stump is willing to give the TMNT aid if they agree to another exclusive match on his Intergalactic Wrestling program. The TMNT reluctantly agree and Cudley spits out their reinforcements: Leatherhead, Wingnut, Screwloose and the enigmatic Trap! 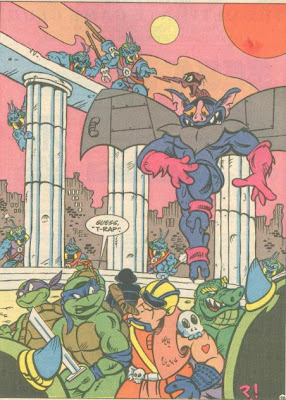 However, as soon as Cudley vanishes into space, the Turtles and their friends notice that they’re being surrounded by Maligna’s children…

*Wingnut, Screwloose and Cudley the Cowlick were last seen in TMNT Adventures #8.

*The Flying Footskis were, of course, available from the Playmates toyline.

*This issue was reprinted in the UK by Fleetway in TMHT Adventures #19.

The penultimate episode of TMNT Adventures’ first original story arc has come and gone and it succeeds at impressing. For all his whining and pouting, Krang really is an evil sunuvabitch. Cherubae describes him the same way Screwloose did: “He’s an evil brain that hasn’t a heart by which to weigh the consequences of his actions”. This paints a fairly gritty picture of what Krang is really like when he’s not bickering with the Shredder like an old maid.

All-in-all, this is a great set-up for the conclusion, but the action doesn’t really get underway until the next issue.

Grade: A (as in “And you all thought Krang was nothing but a disembodied Katherine Hepburn. Think again!”)