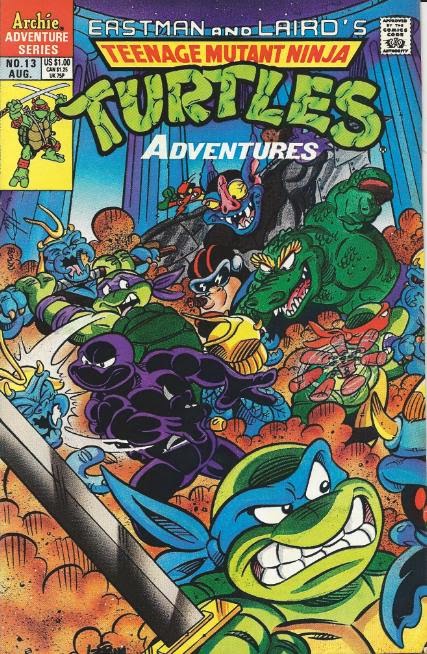 Over at Stump Broadcasting Studios, Stump and Sling recap the events of the previous issue to an intergalactic viewing audience. After that formality, they (and their ring-persons, Tyme & Fayme) present what Stump likes to call “The Final Conflict”. 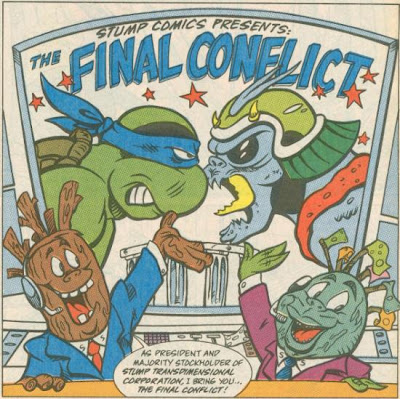 On Hirobyl, Raph is wondering where all the weird, flying cameras that are getting in their way have come from. Trap explains that their current battle with Maligna’s children is likely the exclusive “wrestling match” they agreed to with Mr. Stump. As the TMNT and allies take on Maligna’s kids, Wingnut and Screwloose take to the skies in search of Krang. While Leo argues with Trap over the honor of firearms, a pair of Maligna’s warriors hurl Leatherhead outside of the arena.

Up in the sky, Wingnut and Screwloose spot the Shredder. Realizing he’s one of Krang’s cronies, Wingnut promptly beans him with a rock. Wingnut then causes Bebop and Rocksteady to crash into one another. 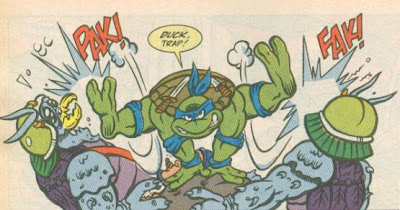 Back in the arena, the Turtles and Trap have the fight just about sewn up until Krang attacks in his spaceship. Outside the arena, Leatherhead comes to and notices the Turnstone on the ground next to him. He decides to use it to summon Cherubae, the one who created him, and instead gets Cherubae and her captors: the Sons of Silence. He quickly thinks the little grey men away and hands the Turnstone over to Cherubae. Leatherhead asks her why she turned him into Leatherhead in the first place and she explains that it was all a matter of fate.

Cherubae then uses the Turnstone to abruptly end the conflict: capturing all the villains in a stasis field and destroying all of Stump’s cameras. Cherubae then proceeds to punish all the villains. Bebop and Rocksteady are sent to live in peace on a planet inhabited only be wildlife, where they join a herd of rhinos and warthogs. Shredder is returned to Earth and sent to prison for his crimes. Krang draws the shortest straw and is banished to Morbus, the toxic waste dump-world. 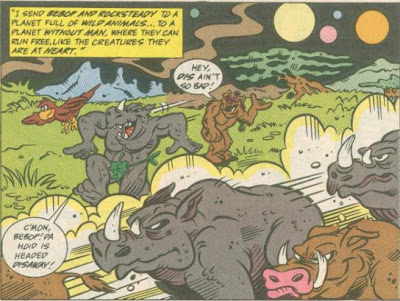 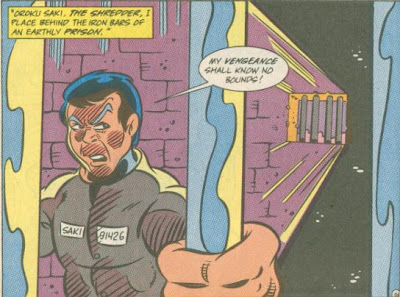 With that out of the way, Cherubae thinks the Turnstone out of existence, as she fears its power is too dangerous for the universe. As the Turtles and their allies worry about how they’re going to return home, Cherubae alleviates their concerns. She gives Krang’s ship to all of Stump’s employees while the Turtles have the fortune of riding home in the maw of Cudley the Cowlick.

*The Turtles will take a side-trip to Riverdale on their way home with Cudley in "Green Legs and Gams".

*The Sons of Silence will appear again in TMNT Adventures #48.

*Apparently, when Krang modified the Technodrome into a spaceship, he renamed it “the Skull-Buzzer”.

*Shredder will return in TMNT Adventures #21.

*Krang will return in TMNT Adventures #23.

*Bebop and Rocksteady will return in TMNT Adventures #24.

*Trap will appear again in TMNT Adventures #35, in the back-up story "Mah Name!". The little purple and green alien kid watching the broadcast will also return in that story.

*The Turnstone will appear again in TMNT Adventures #49.

*This issue was reprinted in the UK by Fleetway in TMHT Adventures #20.

And so the first original story arc of TMNT Adventures comes to a close. I have to say, it was overall very enjoyable and these last couple of issues really tied everything together nicely. Save for some moments of blatant commercialism, issues #5-#13 read together marvelously and form one of my favorite arcs of the series. This was a great transitioning period for the book, as it worked its way out of slavishly retelling episodes of the cartoon to modifying the universe into its own unique yet familiar entity.

The “final conflict” seemed like a bit too epic a title for the battle contained in this issue, I must confess. The Turtles and Trap defeat Maligna’s warriors with relative ease and this won’t be the last time they face any of the foes from this issue. While it was an entertaining scuffle, the title was a smidge melodramatic. I suppose if I could change one thing, it would have been to stack the odds against the TMNT just a little bit more. The resolution is a little too convenient, with Cherubae simply saving the day as soon as she gets her hands back on her precious MacGuffin.

If any visual in the issue appealed to me the most, it would have to be the three panels illustrating the fates of the badguys. Bebop and Rocksteady, as violent as they may be, are still fairly innocent in their stupidity. So I was pleased to see them receive a happy ending. The sight of Shredder, out of costume and stewing behind bars, is quite dramatic and not something you see very often. Berger’s inks and Grossman’s colors really amplify the panel, too. Meanwhile, Krang looks so sad as he sits amongst millions of toxic waste barrels on Morbus. You almost feel sorry for the little guy.

All in all, despite a somewhat convenient resolution, this is an issue that really delivers.

Grade: A (as in “And the American prison system manages to keep Shredder behind bars for about ten minutes. I’m impressed, honestly”.)