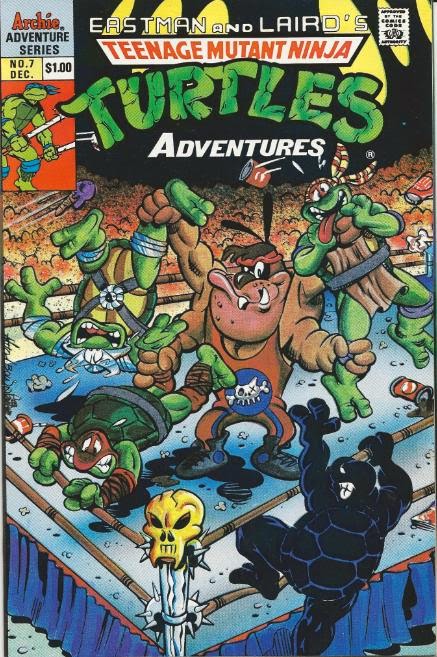 After Raph recaps the events of the past few issues, he registers his discontent with his captors: a pair of enterprising outer space tree-men named Stump and Sling. With the aid of Cudley the Cowlick, a gigantic disembodied cow’s head that can traverse time and space (what the hell…?), the pair of money-loving flora inform the Turtles that they are to be the evening’s entertainment in their Intergalactic Wresting Competition. As you can imagine, the Turtles aren’t too hip to that idea, but as long as their weapons are somewhere in Cudley’s mouth, and they’re light-years away from home, the TMNT have little choice. 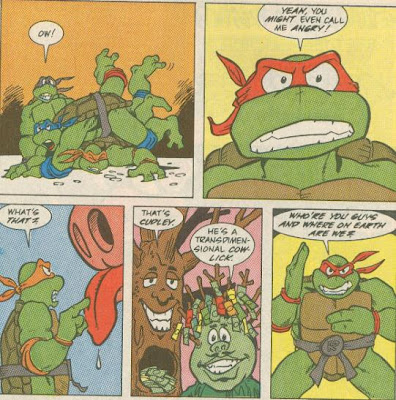 Back at Shredder’s HQ on Earth, the razor-clad villain tries to explain Leatherhead’s destruction to a very upset Krang, who needed Leatherhead to locate the Turnstone. Krang isn’t about to listen to Shredder’s excuses and hangs up.

Back in space, Stump and Sling introduce the Turtles to the other contestants: the vocally-limited and four-armed Cryin’ Houn’, the pompous and “oh god, I wish he’d put more clothes on” Ace Duck, and the ragin’ Cajun-himself…Leatherhead? Yes, as it turns out, Cudley rescued Leatherhead from imminent death so that he could compete in the night’s competition. The Turtles then leave to change into their gaudy wrestling costumes and prepare for battle.

Two matches begin simultaneously: one featuring the Turtles vs. Cryin’ Houn’ and the other featuring Leatherhead vs. Ace Duck. The matches don’t go so well at first, with Houn’ clobbering the TMNT and Ace making a fool of Leatherhead. However, both feature a surprise upset as Leonardo launches Houn’ with a flying jumpkick and Leatherhead flings Ace out of the ring at the same time; the two fighters colliding in midair. 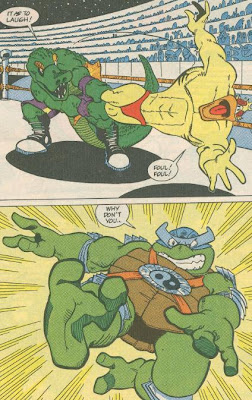 As soon as the matches end, Cudley pukes up the TMNT’s weapons. With their bargaining posture weakened, Stump and Sling agree to send the Turtles back to Earth, though Leatherhead opts to stay and pursue a heroic career in showbiz.

Back in Dimension X, a somber Krang decides to drown his sorrows in some Intergalactic Wrestling, only to discover that he’s missed the entire match. Somewhere in Dimension X, an infuriated brain is shaking his tentacles. 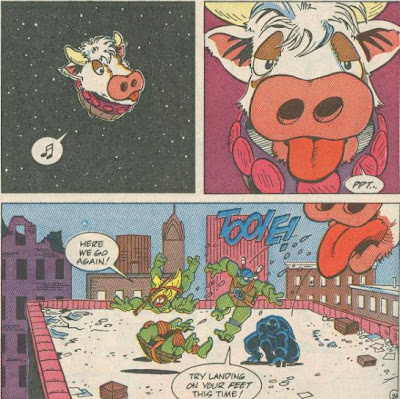 Within the gaping maw of Cudley the Cowlick, the Turtles are feeling relatively disgusted. They believe their trip to be over when Cudley spits them out onto the roof of a skyscraper, only to learn that he’s accidentally taken them into a possible future. In this ruined world, Earth was destroyed by global warming (subtle). Cudley apologizes and promptly takes them back to their proper time and place. The TMNT are relieved to be home, though an ominous storm looms overhead…

*The Mirage Mini Comics Collection story #4, “A Forgotten TMNT Adventure” takes place between the first and second panels of Page 27 of this issue.

*The unnamed skull-clad gentleman standing next to Stump is Trap, a character who won’t appear again until TMNT Adventures #12.

*A creature looking identical to Fluffy Brockleton, a character from Michael Dooney’s “Gizmo” can be seen in the crowd at the Intergalactic Wrestling match. Also in the crowd are R2-D2 and a Triceraton.

*Ace Duck’s characterization is… strange. His toy bio describes him as being the TMNT’s reserve pilot, who operates the Turtle Blimp for them. His one appearance in the Fred Wolf cartoon had him as a television character (in an extremely brief cameo) in the episode “Attack of the Big MACC”.

*It is revealed in this issue that “Dimension” X is actually a far-off galaxy and not an alternate universe as the name “Dimension” would imply.

*The Turtles will revisit the global warming-destroyed future many more times, beginning in TMNT Adventures #42.

*This issue was reprinted in the UK by Fleetway in TMHT Adventures #10.

With this issue, Ken Mitchroney takes a brief hiatus, leaving Mirage staffer Jim Lawson to handle the art duties. Mitchroney will be back next issue. Lawson (who is apparently Peter Laird’s favorite artist) will act as a fill-in artist throughout the rest of TMNT Adventures.

I have… not so many nice things to say about Jim Lawson’s artwork (or his modern artwork, to be more specific). This issue, however, hit the stands in 1989, when Jim Lawson was still trying. His take on the more whimsical designs of the animated TMNT is interesting. Lawson likes to draw everything very boxy and angular, but these Ninja Turtles are all quite round and puffy. Seeing him adjust to these character designs is strange, but he actually handles the job nicely. His art lacks the same atmosphere of “fun” as Mitchroney’s, but you can tell Lawson did his best to give the characters more exaggerated features and expressions.

As I mentioned earlier, though, Lawson is an artist whose skill and attention to detail gradually eroded over time. As he randomly fills in for both cover art and interior duties over the years, all the way up to TMNT Adventures #61, you’ll be able to see for yourself exactly what I mean. Hell, if you don’t want to wait that long, just open up a copy of TMNT Adventures #24, which was done only two years after this one. Compare it with his efforts here and you can already see a massive difference in quality.

Okay, pissing and moaning about Lawson aside, this was a fun little issue. It may seem like a pointless diversion at first glance, but all the characters introduced here come into play by the arc’s conclusion, so don’t worry. A lot of the concepts that Clarrain (Murphy) and Brown show off here are a little…cracked-out, to say the least. I mean, Cudley the Cowlick, on his own, is one of the most acid-tripping things I’ve ever seen, but when combined with anthropomorphic tree-people and the sheer homoerotica of professional wrestling…well, you can’t help but wonder what these guys were on.

Grade: B+ (as in “Be prepared to see a lot of bulging buttocks in this issue. A lot”.)