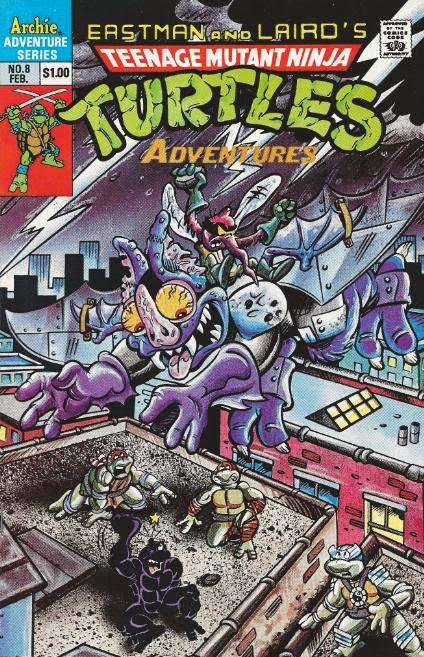 As Cudley the Cowlick departs, the TMNT find themselves being pelted with rocks by a strange bat-creature named Wingnut and his mosquito-like pal, Screwloose. It seems Wingnut has a vendetta against skylights. The Turtles couldn’t care less about the flying psychopath and instead head to the sewers and back to their lair. 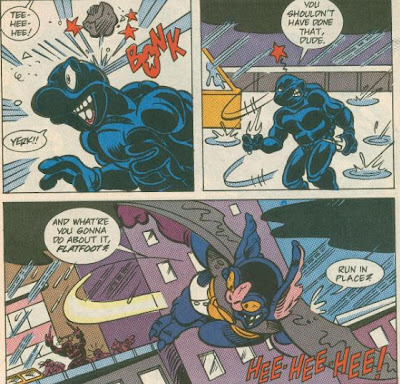 Greeting Splinter, the Turtles catch April on the Channel 6 news. Apparently, Wingnut is more dangerous than they thought, as he sends the G’Day Blimp crashing down with a single swipe of his talon. The TMNT aren’t about to take this sitting down and pile into the Turtle Blimp and deploy for action.

Out in the open sky, Wingnut promptly pops their blimp. Not to worry: the blimp’s glider is far more maneuverable! As the TMNT tail their winged foes from the Empire State Building to the World Trade Center, they find the chase a difficult one, as the stormy weather makes visibility quite poor.

Eventually cornering their enemies on the roof of the Twin Towers, Leo manages to tie them both up, allowing for an interrogation. As Wingnut suddenly begins to blubber like a baby, Screwloose pacifies his master by draining some of his blood. The TMNT demand answers and Screwloose explains that they are both from a planet called Huanu, where Wingnut once lived happily with his family. Screwloose’s people had a symbiotic relationship with Wingnut’s; the bat-creatures would provide the mosquito-creatures with blood while the bite of the mosquito-creatures was the only means for the bat-creatures to get to sleep. Everything was going great until Krang attacked and wiped out all of Wingnut’s people, making him the last of his kind. This eventually drove Wingnut mad; his cunning plan on Earth was to keep destroying skylights until he found Krang.

As soon as Screwloose finishes his story, Wingnut awakens and breaks free. He and Screwloose take to the skies, only to be gobbled up by Cudley. Cudley explains that when he returned the Turtles to Earth, he accidentally opened a rip in inter-dimensional space which allowed Wingnut and Screwloose to pass through. Cudley apologizes and then spits out the TMNT’s regular costumes, which he had forgotten to give them after the wrestling match. The Turtles ask what he intends to do with Wingnut and Screwloose and Cudley tells him that Mr. Stump intends to use them in his Intergalactic Wrestling match. The Turtles voice their disapproval, but to no avail; Cudley disappears into space, anyway. 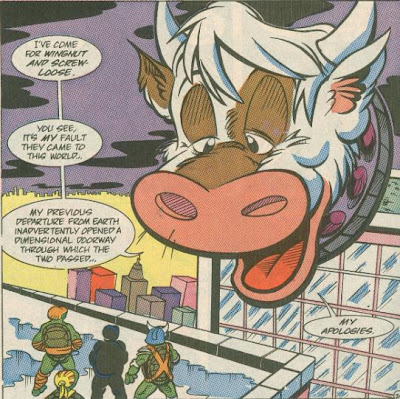 The Turtles return home in the glider and change back into their original outfits. They find a red-eyed Splinter still watching the news and Mike laments that he can’t find any apple cores for his milkweed and apple core pizza. Raph jokes that there might be one behind the couch, sending a drooling Mike searching all over the floor until at last he finds one. The other Turtles are reasonably disgusted.

*Splinter and April were last seen in TMNT Adventures #4.

*Wingnut and Screwloose will return in TMNT Adventures #12.

*Wingnut actually first appeared in the TMNT Cereal comics from Ralston Purina in 1989.  He was a bit different in that early incarnation; a hench-mutant of the Shredder's with no Screwloose in sight.

*Wingnut and Screwloose appeared in only a single episode of the Fred Wolf TMNT cartoon, "Zach and the Alien Invaders", as one-shot villains. Rather than Huanu, their home planet was identified as Flagenon.

*This issue was reprinted in the UK by Fleetway as TMHT Adventures #11.

More of Clarrain (Murphy) and Brown’s…”bizarre” story-telling with this issue. So Wingnut and Screwloose’s big plan was to keep breaking skylights until they found Krang? Brilliant!

Like many characters, I always preferred this interpretation of Wingnut and Screwloose over their appearance in the cartoon, where they were generic alien invaders (they appeared in the episode “Zach and the Alien Invaders”, by the way).

The return of the Turtle Blimp I could have done without, to tell the truth. I can accept some of their other vehicles, such as the Turtle Van and the Cheapskates…but a blimp is just pushing it. Kinda sucks the “ninja” right out of the title when the Turtles are prancing around the city in a blimp with their logo on it.

With this issue, Ken Mitchroney returns to art chores and I couldn’t be happier. His manic style fits the (if you pardon the pun) bat-shit crazy characters of Wingnut and Screwloose to a “t”. I love that face Wingnut makes as he hurls a rock at the TMNT on Page 4.

Also of note is that long-time Mirage staffer and all-around good guy Dan Berger inked this issue. And good show on that, too!

Grade: B+ (as in “Because I know I sleep a hell of a lot better when there are mosquitoes guzzling my blood…”)