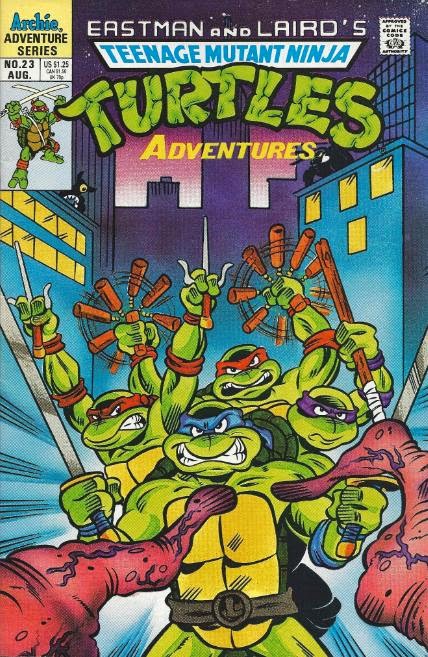 Down in the sewers, Don has just finished his latest invention: a sewer hot tub. The Turtles are enjoying a much earned rest, though April isn’t very thrilled at the invitation to bathe in sewer water. As April leaves to “keep guard” (paranoid much?), the Turtles bombard Raph with questions about his recent adventure with the Mutanimals and their defeat of Queen Maligna. Raph explains that their allies, including Michaealangelo’s buddy Mondo Gecko, chose to stay behind and form a group while he hitched a ride back to New York with Cudley the Cowlick. 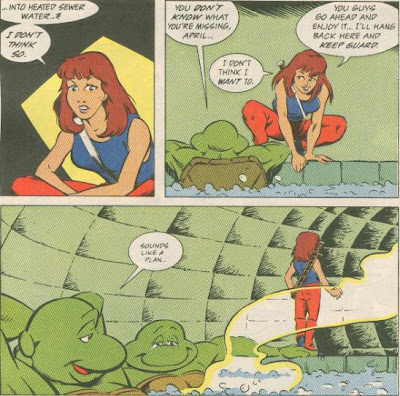 Over in Dimension X, on the toxic waste dump world of Morbus, a pitiable Krang is slowly sinking into a sea of acid on top of a dissolving barrel. Krang laments his defeat and curses Cherubae, Shredder and the Turtles. However, as soon as he mentions his hatred of turtles, a shadowy turtle-esque figure approaches him from the horizon.

On Earth, the TMNT’s rest is brought to an abrupt end when Splinter arrives and sends them out to patrol the sewers and see if they can’t locate the Shredder. Meanwhile, April stays behind to continue her ninjutstu training. 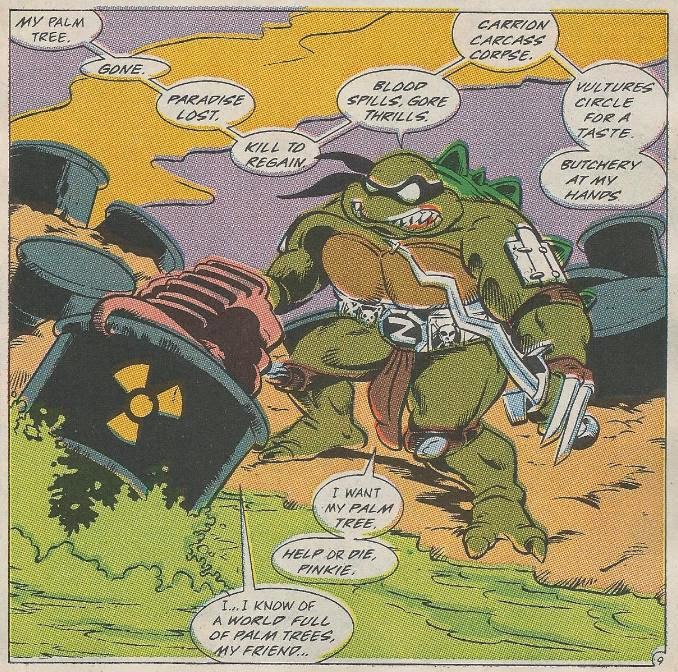 Back on Morbus, the freaky turtle with the black bandana has a “discussion” with Krang. It seems the black-clad turtle is completely off his nut and on an insane quest for his “palm tree”. Krang bends this to his advantage and promises to take the turtle to an entire planet full of palm trees if he fishes him out of the toxic see. The turtle rescues Krang and proceeds to identify himself as Slash. Slash explains that Morbus doubles as a prison planet and that he was banished there after committing unspeakable atrocities. Listening, Krang begins to formulate a plan.

Down in the sewers, Leo is worried that Splinter may be too eager for a fight with the Shredder. His train of thought is interrupted, though, by a group of robbers brandishing a bazooka.

On Morbus, a prison ship lands and a pair of armored guards (Intergalactic Police Officers) escort the villain called Bellybomb on to the surface. They read the evil-doer (a monster with a giant mouth for a stomach and a giant eyeball for a head) his list of convictions and prepare to ditch him when Krang whispers his plan into Slash’s ear. 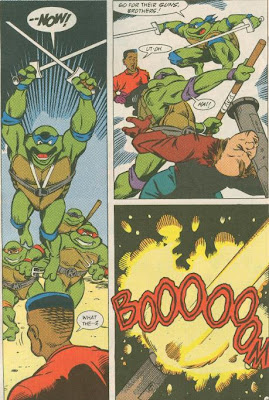 On earth, the robbers prepare to set up their bazooka to blast through the underside of the street where an armored car is parked, thus allowing them to pilfer it from underneath. The Turtles aren’t having it, though, and attack.

On Morbus, Slash leaps into action and violently guts the prison guards with his sword (holy crap!). He then frees Bellybomb from his chains and the two run back onto the prison ship to deal with the remaining guards. Outside, Krang is pleased with his new allies and intends to seek vengeance upon his enemies…as soon as he gets a new body. 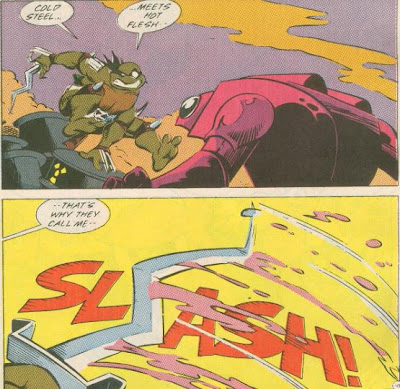 Back in the sewers, the Turtles finish off the last of the robbers, take their guns and tie them up for the approaching authorities to find.

And finally, back on Morbus, Krang takes control of the ship and the trio of villains blast off into space. Bellybomb says he wants to go some place where he can wreak havoc and have a good time, while Slash wants to go some place with lots of palm trees. Krang tells them that he knows of a world where they can both get what they want…

*Krang was banished to Morbus in TMNT Adventures #13.

*This issue will be reprinted in the UK by Fleetway in TMHT Adventures #41.

Ahh, the Slash Trilogy: one of my all-time favorite arcs from TMNT Adventures, crazily fluctuating art and all.

This issue also ushers in the grand debut of TMNT Adventures’ most recognizable artist: Chris Allan. While Ken Mitchroney defined the more jovial style for the series, Allan found a nice middle-ground between action and comedy. I feel compelled to compare TMNT Adventures to another Archie book from the 90’s: Sonic the Hedgehog. Sonic featured light-hearted stories with serviceable art from the likes of Art Mawhinney and Dave Manak, but didn’t really hit its stride until Spaz took on art duties with issue 21. Just as Spaz would become the most recognizable penciler for Sonic the Hedgehog, Chris Allan would become the name most synonymous with the title.

While Allan’s work is definitely excellent right out of the gate, it does take a few issues to really define itself, which is understandable. The Turtles don’t yet look as smooth and refined as his later issues, but they’re on their way. Allan’s Krang, though, is 100% awesome. He’s so…so…adorable! It’s hilarious. An intergalactic warlord and despot, and yet when you see him crying on page 4, all you can say is “Awwwwww!” 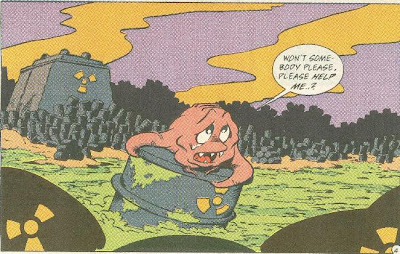 Turning away from the art and back to the story, the Slash Trilogy also acts as a somewhat new direction for the book. After this story arc finishes, Clarrain (Murphy) will make a distinct effort to distance TMNT Adventures from the Fred Wolf cartoon to an even greater degree. As it stands, the Slash Trilogy acts as a farewell from a few mainstay characters from the animated series. I’ll comment more on that as it happens.