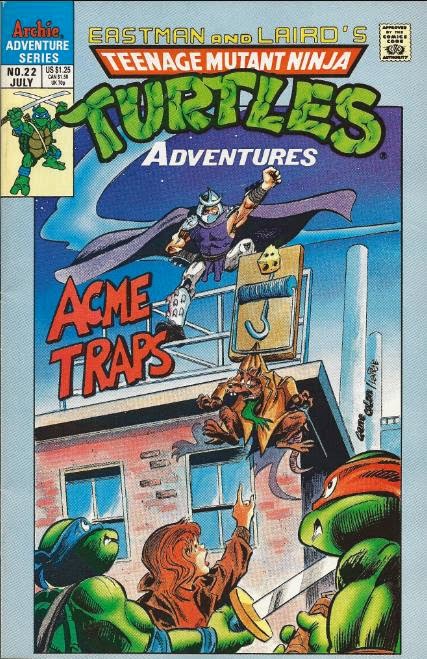 Writing in her journal, April records the events from the past few days, lamenting over how the Turtles have become separated (Raph stowing away in Skul and Bean’s spaceship and Don getting trapped in a computer file by Vid Vicious which was then stolen by Shredder). 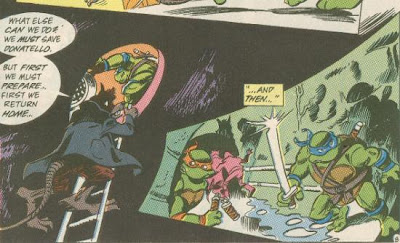 With the exposition out of the way, April, Splinter, Leo and Mike begin searching the remains of their battle for clues as to Shredder’s whereabouts. As Mike loses his temper over some broken Foot Super Soldiers, Splinter and Leo recall the strange warehouse in Chinatown where the giant Foot Super Soldier emerged to fight Warrior Dragon.

They head to the warehouse to search for clues, finding a book of matches with the “Acme Traps” logo on it. Splinter believes that the clue was left for them by the Shredder and warns them to be ready for a trap. 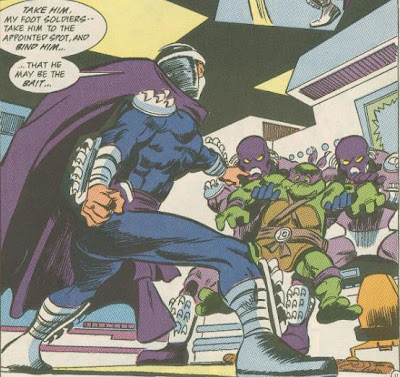 At the Acme Traps factory, Shredder uploads the stolen floppy disk into his computer. Vid Vicious comes crashing through the monitor and flies off into the night (bidding a hasty thanks to Shredder). Don, now free from the computer file as well, attempts to go one on one with the Shredder only to be easily subdued. The Foot Super Soldiers then drag him away, intent on using him as bait for Shredder’s trap.

Down at the Lair, the Turtles, Splinter and April have finished preparing for the battle ahead. Sneaking into Acme Traps, they find the backdoor unlocked and fear the worst. Inside, they find Don bound, gagged and dangling precariously over a maze with three entrances. Splinter sends Leo, Mike and April through each entrance to the maze, staying behind to contemplate a strategy. As he contemplates, he notices a ladder leading up to the catwalk and quickly ascends.

Meanwhile, within the maze, Mike is ambushed by a duo of Super Soldiers. He makes short work of them, only to find that his entrance has lead to a dead end. Elsewhere, April and Leo bump into each other, both coming to the conclusion that the maze leads nowhere and was simply a distraction. 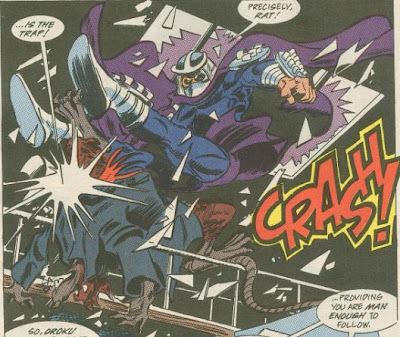 Up on the catwalk overlooking the maze, Splinter has the same epiphany. As he realizes that his path was the true trap, Shredder comes crashing down through the skylight above him. Splinter lands a swift kick to Shredder’s face and leaps through the broken skylight and onto the roof. Shredder heads up after him, intent on killing his arch rival once and for all. The two tussle for a bit, with Shredder hurling Splinter over the edge of the roof. Splinter is momentarily saved when his coat snags on the Acme Traps sign. 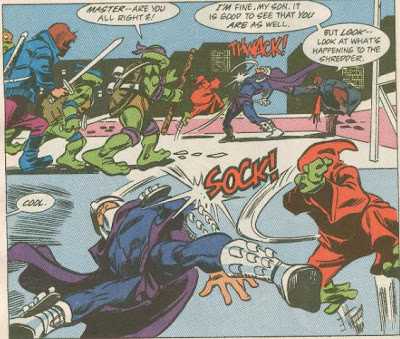 As Shredder prepares to slice Splinter free and send him to his doom, he is unexpectedly assaulted by a mysterious figure in a red robe. The two go at it, with the red hooded figure successfully knocking Shredder out. As soon as he proves victorious, April, Mike, Don and Leo arrive on the roof. The mystery man reveals himself to be none other than Raphael, who has just returned from saving the world from an alien invasion.

As Splinter, the Turtles and April joyfully reunite, the Shredder slips away to freedom.

*Some time between this and next issue, the events of "Monsters are the Rage!", "The Darkest Hour" and the stories published in TMNT Adventures Special #4 take place.

*This issue was published in the UK by Fleetway as TMHT Adventures #40.

I hate to sound overly negative, but at the end of the day, these past three issues of TMNT Adventures just don’t amount to much. With the Mighty Mutanimals miniseries tying up the majority of the plot threads, TMNT Adventures just wasn’t left with much to do. The only real items of value introduced during this story arc would have to be the debut of Warrior Dragon and the reveal that Shredder has escaped from prison.

Speaking of Shredder, his big comeback is pretty pathetic. Setting up a maze at a mousetrap factory? That’s the kind of evil scheme the Shredder of the 80s cartoon would have concocted. Personally, I expect better from Archie’s interpretation of the character. This story also represents Shredder’s first evil plot without being partnered with Krang. Shredder comes across as woefully ineffective and dull-witted, making him seem pretty useless and weak without a pink alien brain to back him up. This, of course, doesn’t hold true at all, as Shredder proves to be a much more capable villain in future issues. But as he is presented in this storyline, well, he’s pretty much a doofus.

Raph’s big return from his adventure with the Mutanimals makes for a nice (if a little too convenient) conflict resolution, though I have to argue with his skill level. It’s true that Raph initially takes the Shredder by surprise, but he then proceeds to dispatch the TMNT's deadliest foe with almost comical ease. It’s an especially glaring variance in power, considering both Don and Splinter were shown getting trounced by Shredder earlier in this very issue.

On art duties, we have an artist whom I've always liked: Gene Colan. You should probably recognize the name, as he's been a huge player in Marvel comics for decades (his run on Tomb of Dracula was epic). Colan takes a slightly more serious approach to the look of the title, forgoing the more whimsical styles of Ken Mitchroney and Byron Vaughns. While it may clash with Vaughns' overtly cartoonish work from the previous issue, I thought it looked very dynamic and made for a well-balanced aesthetic. His fight scenes all look especially exciting and his Shredder looks suitably imposing and dangerous (despite being a goof in this story).

This three issue story arc basically screams one word and you’re not going to like it: “filler”. I completely understand why it was necessary and I am glad that a few elements are followed up on in future stories, but these issues form a pretty dull storyline and feature an embarrassing portrayal of the Shredder.