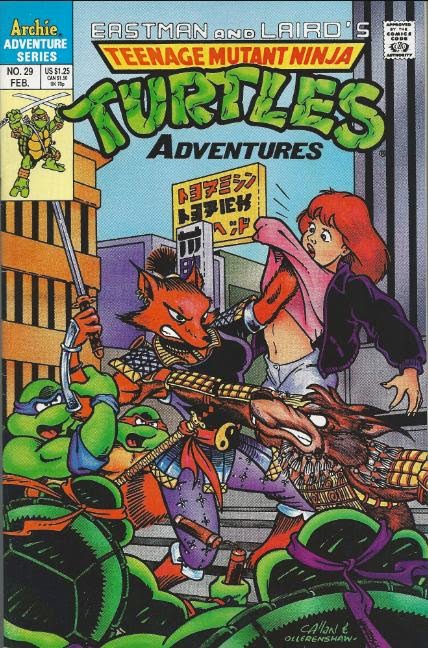 Sitting with the Turtles and April in front of Hiroshima’s “A-Bomb Dome”, formerly the Industrial Exhibition Hall, Splinter recounts a story of his youth. When he was younger, his Great-Uncle Gyogi was his sensei and first taught him in the ways of martial arts. On August 6, 1945, he and Gyogi were training on the rural outskirts of Hiroshima when America dropped the atomic bomb. Though Hamato Yoshi survived, Gyogi was blinded by the blast. Later, when surveying the destruction, they found that the only building left standing was the Industrial Exhibition Hall; hence its new name. 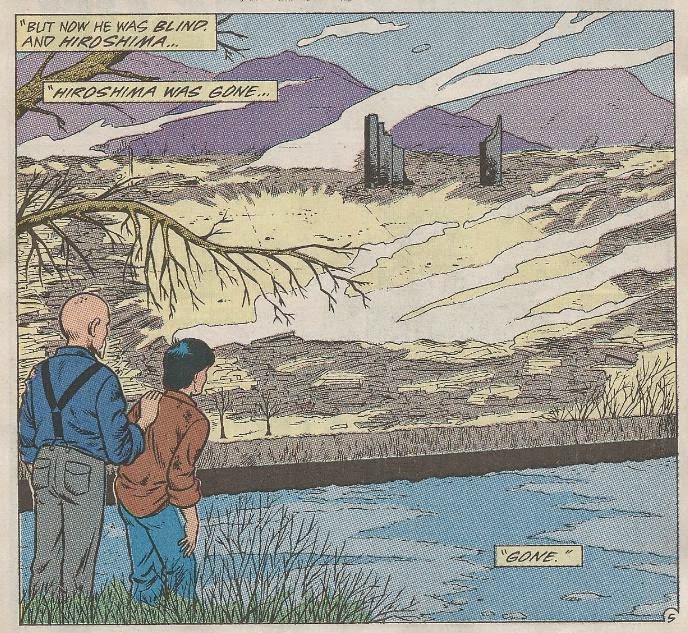 Splinter explains that to escape the nuclear fallout, he and his family fled Hiroshima. Though blind, Gyogi’s other senses blossomed and he continued as Splinter’s sensei until he went to university. This trip, however, marks Splinter’s first time being back in the city.

Suddenly, Ninjara (the fox-woman) leaps down and addresses them. Splinter explains they are not looking for trouble (while Raph calls her a “babe”), but Ninja refuses to listen. Since they are searching for the Warrior Dragon, they are her enemies. Ninjara raises her katana and several white ninja appear at her side.

Back at Chien Khan’s hideout, the villain has completed the basic mixture of powders to shape the Warrior Dragon. Still tied up, Fu Sheng asks the girl Khan had kidnapped her name. She introduces herself as Oyuki Mamisha, and she insists that he doesn’t have to help her, as her life is lousy, anyway. Sheng tells her that all life is valuable and concedes to help Khan complete the last parts of his formula. Khan sends Sheng over to his collection of rare herbs (all stolen by Ninjara), as he laughs over the unconscious body of Chu Hsi. 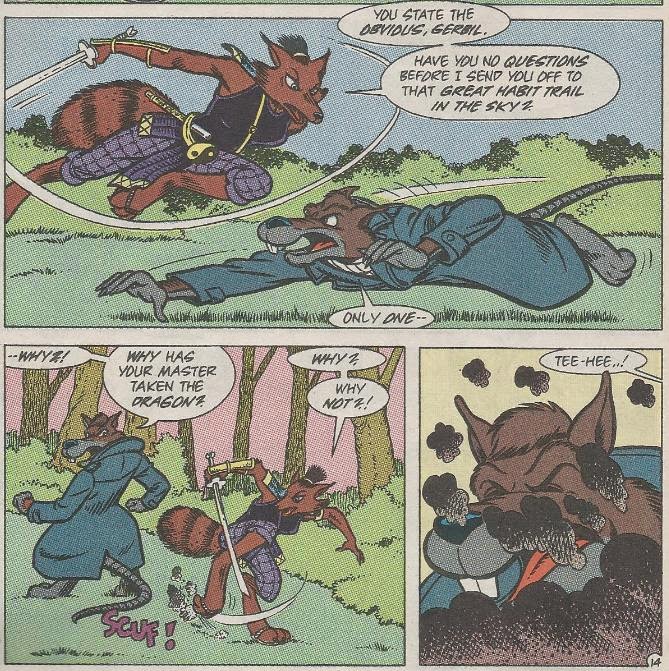 Back at the A-Bomb Dome, the Turtles, Splinter and April continue their battle against the white ninja as Raph fights/flirts with Ninjara. Ninjara takes Raph out with a back-flip and then faces Splinter. Splinter asks why her master has taken Chu Hsi, but she isn’t talking.

At the hideout, Chien Khan sprinkles something over Chu to make his transformation into the Warrior Dragon “less traumatic”. Sheng then reluctantly hands Khan the mixture and Khan prepares to awaken the spirit of the Warrior Dragon.

At the A-Bomb Dome, Leo strikes a white ninja with his katana only for it to vanish into smoke, leaving its clothes behind. Splinter explains that white ninja are born into ninjutsu and that their clothes represent their connection to sorcery and the spirit world. Picking up one of the white ninja’s katana, Splinter says he can use it to vanquish their foes and continue their search. 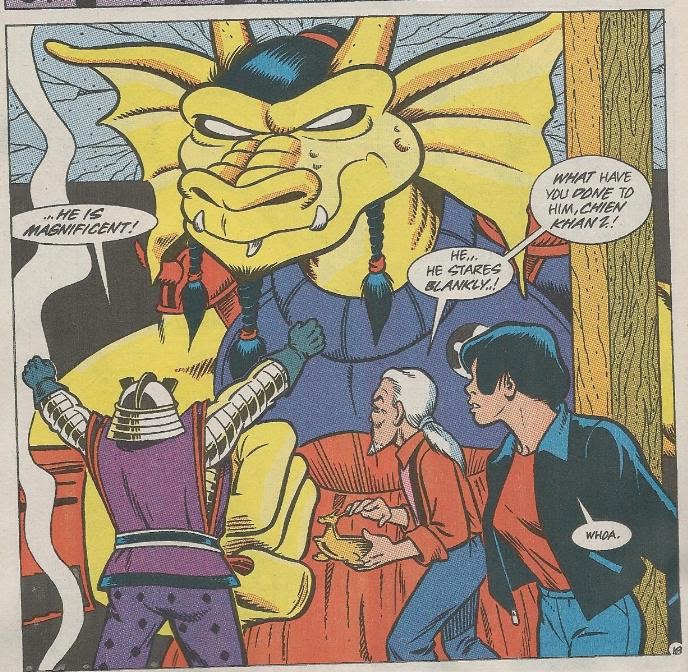 Meanwhile, the Warrior Dragon has awoken, only he seems mindless. Khan explains that the powder he sprinkled over Chu was mind-controlling. He then sends the Dragon out into the streets to do his bidding.

And back at the A-Bomb Dome (again), Splinter takes on Ninjara once more, but this time in a duel. He asks Ninjara if she was mutated by the A-bomb, but Ninjara explains that she is no mutation, but a member of an ancient race of fox-people. Suddenly, the Warrior Dragon comes stomping through, completely in a trance. The Turtles recognize something is wrong with him and they leap onto his back, making their escape. Ninjara, insistent on killing Raphael, manages to latch onto the Warrior Dragon as well.

At the hideout, Oyuki asks Sheng what Khan’s orders to the Dragon were. Sheng says that he ordered the Dragon to destroy a nuclear power plant so that he can use the raw power released to rip open a portal to the demon world.

*Ninjara's race of fox-people won't be visited until TMNT Adventures #46.

*On page 19, the Japanese Chien Khan speaks translates as, “You will listen to my tale…” Fu Sheng describes it as an “obscure Japanese dialect”. It was just regular Japanese.

*This issue was reprinted in the UK by Fleetway in TMHT Adventures #54.

Well, I think I made my opinion of Ninjara pretty clear in my review for the previous issue, but to recap: I don’t like her.

She hits most of the overwrought “awesome new character introduction” clichés in this one issue, as she confidently proceeds to beat up every main protagonist of the series with relative ease, all while everyone makes remarks about how skilled and “hot” she is. It’s rather obnoxious, really. I know she has a pretty solid fanbase within the TMNT fandom, consisting mostly of furries who recall her as the source of their first boner, but I have no such affections for her.

The real highlight of this issue was the very beginning, as Splinter recounts a tale of his youth as Hamato Yoshi. It was very interesting, as the Fred Wolf cartoon very rarely gave us any insight into what Splinter’s life was like before he became a mutant rat. Most people recall the “Midnight Sun” arc for its introduction of Ninjara, but I enjoy it more for the character work it did on Splinter, as we get to see him remembering his bygone human days while strolling around his homeland.

Oh yeah, and there’s all that shit with the Warrior Dragon, too, but who cares about him? To be honest, despite being the supposed driving force of this arc, he sort of falls flat when compared to the other things going on in it. Odd, since you wouldn’t expect a Godzilla-sized fire-breathing dragon in samurai garb to be the least interesting thing in a comic.