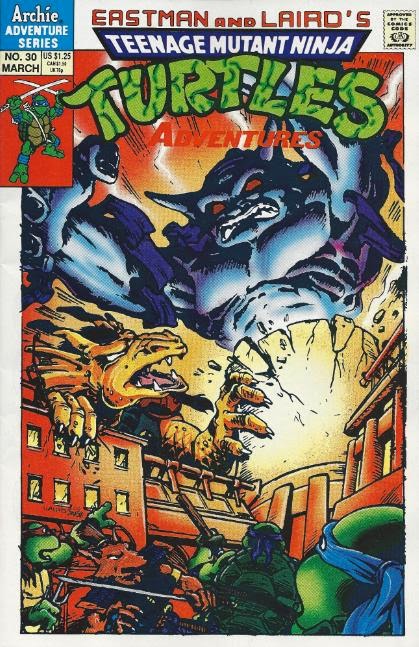 In some bizarre, Hellish underworld, the oni (demon) Noi Tai Dar is addressed by the voice of Chien Khan (while playing pool with a set of skulls). Khan offers Noi Tai Dar all the souls on Earth and asks only that he plunge humanity into the Pit of Nothingness. Noi Tai Dar accepts and pledges to do so if Khan can open the doorway between worlds. 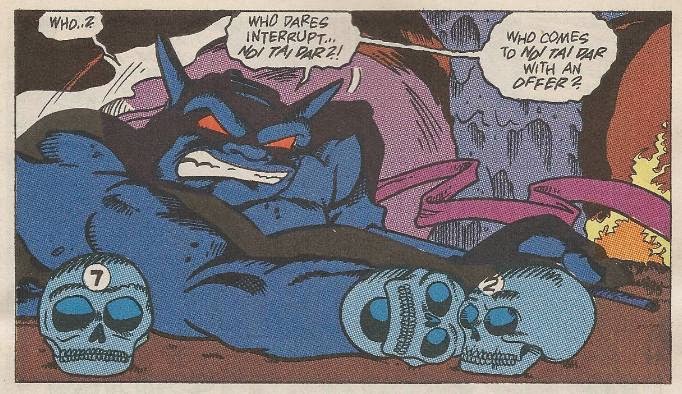 Back at Khan’s hideout, Oyuki and Fu Sheng are watching Khan meditate and make his demands. Sheng explains to Oyuki that the Pit of Nothingness is where soul-death (souls being devoured by demons) occurs. Holding a knife in the air, Khan exclaims that only two things must happen now in order to open the gateway. One, he can handle himself, while the other is up to the Warrior Dragon.

At the power plant, Warrior Dragon is demolishing a cooling tower in an attempt to cause a nuclear meltdown. Donatello foolishly remarks that you can only cause a meltdown by destroying a reactor, not a tower. The Warrior Dragon thanks Don for his “advice” and begins thrashing the reactor housing. Leonardo orders the Turtles to fight the Warrior Dragon off. From the Dragon’s shoulder, Raph decides to have it out with Ninjara once and for all. Ninjara, however, claims she had no idea that the Dragon was going to attack the power plant, only that there was a demon to be summoned. 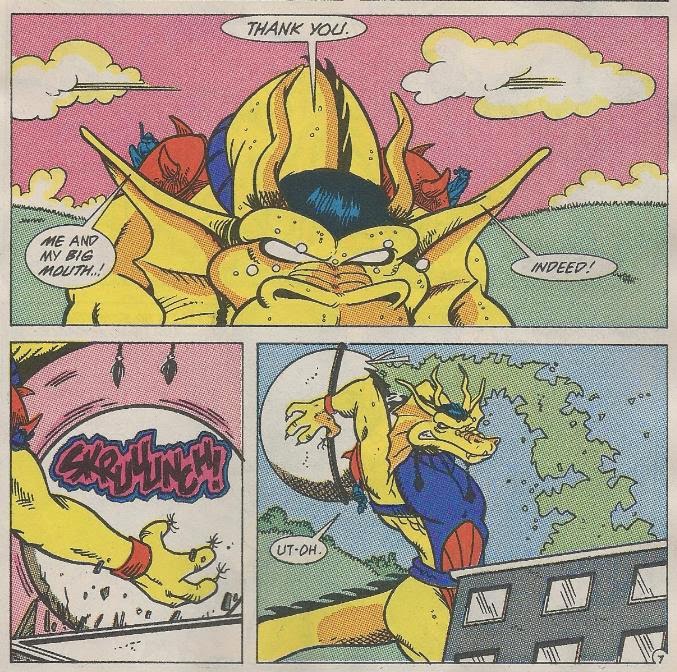 Back at the hideout, Khan frees Oyuki with his knife, but only with the intent of sacrificing her.

On the Dragon’s back, Ninjara tells Raph that she never would have gone through with her mission had she known Khan intended to use nuclear radiation as a power amplifier to summon the demon. Splinter demands to know more about the demon before all is lost. It is too late, however, as Noi Tai Dar emerges from one of the cooling towers.

At the hideout, Oyuki is tied to a table. Khan has a knife raised over her and is finishing up the proper chants for her sacrifice. 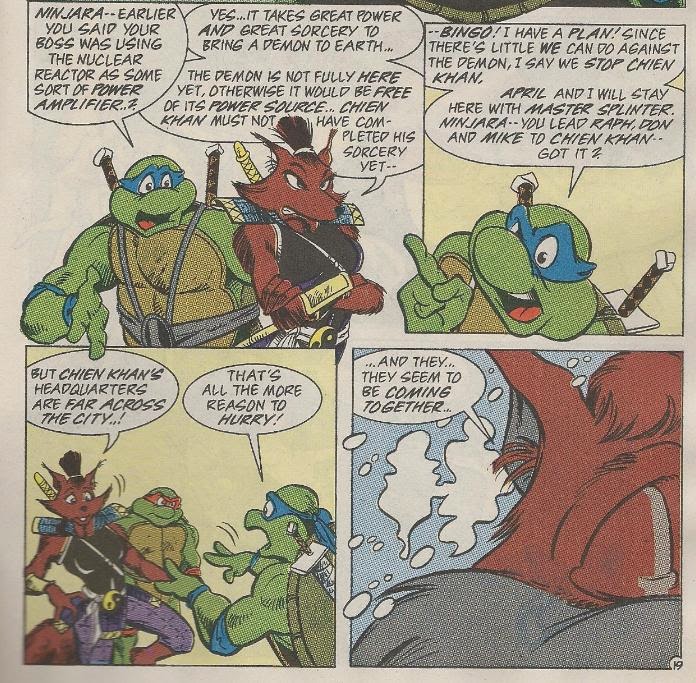 Ninjara has had a change of heart and sides with the Turtles in stopping Noi Tai Dar. She explains that the process for bringing the demon to Earth must not be complete, as Noi Tai Dar is still bound to his energy source. Leo orders Ninjara, Raph, Don and Mike to head to Khan’s hideout and stop him before he completes the process, while he and April stay behind to watch Splinter. Splinter, still meditating, senses a pair of spirits coming together.

As Khan prepares to plunge the knife into Oyuki, Sheng breaks free from his binds. Meanwhile, Noi Tai Dar defeats Warrior Dragon and begins to step out of the cooling tower. Splinter finally recognizes the spirits as Izanami and Izanagi. 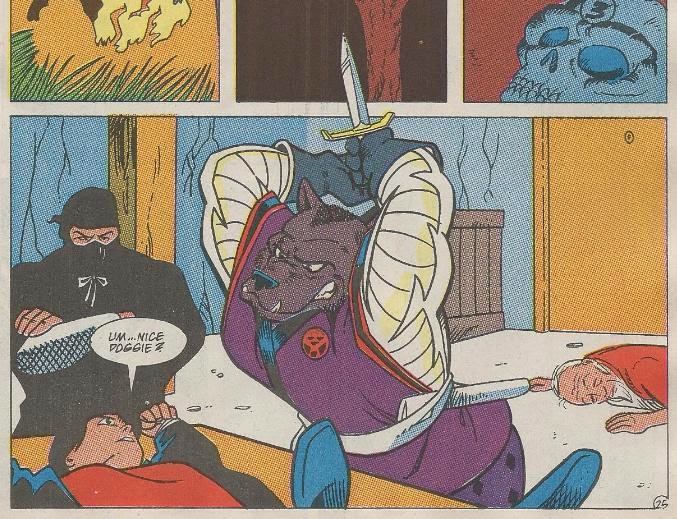 Sheng tackles Khan, preventing him from killing Oyuki. Izanagi removes his blindfold and blasts Noi Tai Dar into oblivion. By tackling Khan, Sheng accidentally knocks off his helmet, revealing him to be a weird dog-man. As Noi Tai Dar is returned to his underworld as a disembodied head amid his own collection of billiard balls/skulls, Khan makes one last attempt to kill Oyuki.

Izanami and Izanagi vanish, leaving a puzzled Splinter to wonder why he felt them manifest originally from the A-Bomb Dome. As Khan brings down the knife, his weapon is knocked away by a pair of nunchaku. The Turtles and Ninjara have made it just in time! They pummel the last of Khan’s ninja while Ninjara subdues her former leader, betraying him once and for all. 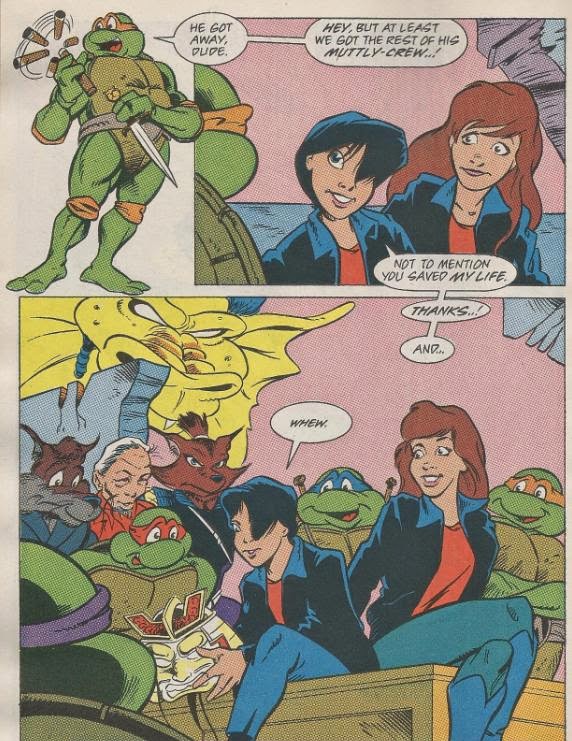 Just then, Warrior Dragon rips the roof off and in the madness, Khan slugs Ninjara and escapes. Raph helps Ninjara up and the heroes reunite, happy that though they lost the mastermind, they rounded up all of his crew.

*Noi Tai Dar will be referenced again in April O’Neil #3.

*This issue was reprinted in the UK by Fleetway in TMHT Adventures #56.

You know, it was media sensationalism and demonizing (literally, in this case) of nuclear power back in the 80s and 90s that got one of the most efficieant forms of energy production (that only produces mere teaspoons of radioactive waste a year and not the barrels seen on The Simpsons) put on moratorium for decades. It’s disappointing to see Clarrain (Murphy) giving into all the press hype about the evils of nuclear power, and that it’s only a matter of “when” not “if” there will be a nuclear meltdown killing everyone on the face of the planet. But then, when taken in the grand scheme of Clarrain’s other story arcs in TMNT Adventures, the guy thinks that littering and whaling will bring about the certain destruction of mankind, so you know, I shouldn’t be surprised.

I was just disappointed that this arc, which managed to go two whole freakin’ issues without hitting on one of Clarrain’s ham-fisted environmental messages, managed to end on one, anyway. No, I’m not some global climate change denier or anything villainous like that. But thirty issues of in-your-face environmental messages are really starting to take their toll on my patience.

Anyhow, the cheap Captain Planet-esque moral about how nuclear power is destined to destroy the souls of every living person on Earth aside, the issue was very action-packed and pretty exciting, thanks in large part to Allan’s artwork. The layouts are very dramatic and the constant back and forth between the fight with Noi Tai Dar and Chien Khan preparing to sacrifice Oyuki really heightens the suspense. It’s nice to see a lot of the goofy, humorous elements are still around, such as Noi Tai Par playing pool with human skulls despite the grimness of everything else going on in the story.

Though April and Oyuki coincidentally wearing exactly the same outfits kind of bugged me. The colorist could have at least given them different-colored undershirts.

Story-wise, I didn’t really like how quick everyone was to accept Ninjara’s “change of heart”. She was willing to sacrifice the souls of all of humanity, but only relented when she realized that her homeland of Japan would be irradiated in the process. Clarrain just seemed in a hurry to give Raph a love-interest, so we’re kind of just supposed to roll with it even if, realistically, she’s still got a lot to answer for.

Overall, the “Midnight Sun” arc just wasn’t for me. As someone who can read Japanese, I dug that Clarrain went through the extra effort to get authentic Japanese dialogue throughout the arc rather than just resort to gibberish symbols (which a lot of writers do, assuming “no one will notice”), so I will gladly offer up that compliment. But, honestly, I don’t really care for Warrior Dragon, I can’t stand Ninjara and the environmental messages are really getting obnoxious by this point in the series. Obviously, I was doomed to disliking this arc from the start.