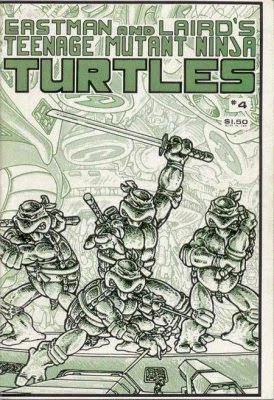 In April’s apartment, Leo laments that the week they’ve spent searching for their missing sensei, Splinter, has been agonizing. His brothers recommend they clear their heads with some late night rooftop exercises and Leo concedes. 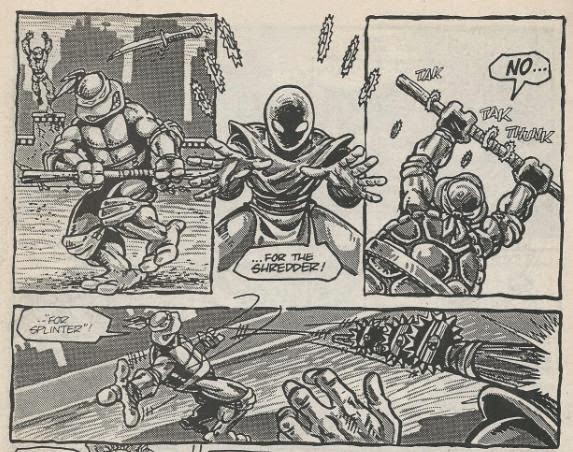 As they leap across the roofs, Leo begins to feel a sense of relief… at least until a unit of Foot Soldiers show up! The Foot Soldiers swear to kill the Turtles in retribution for their slain master, the Shredder. The running battle takes them over several city blocks. By the time they dispatch the last of the Foot Soldiers, they notice they’re standing before a building with a familiar name: TCRI. They recall that name being on the canister of ooze that mutated them long ago.

Back at April’s apartment, the Turtles tend to their wounds while Don tries to dig up info on TCRI. Much to his confusion, there is absolutely no info on them at all, even at the Chamber of Commerce. Suddenly, April comes home, showing off her new hair style. She’s horrified at all the cuts and injuries the Turtles have sustained. As she rubs peroxide on Leo’s cuts, the Turtles assure her that the Foot did not follow them back to her home. Meanwhile, none of them notice a man watching them through a telescope from across the street. 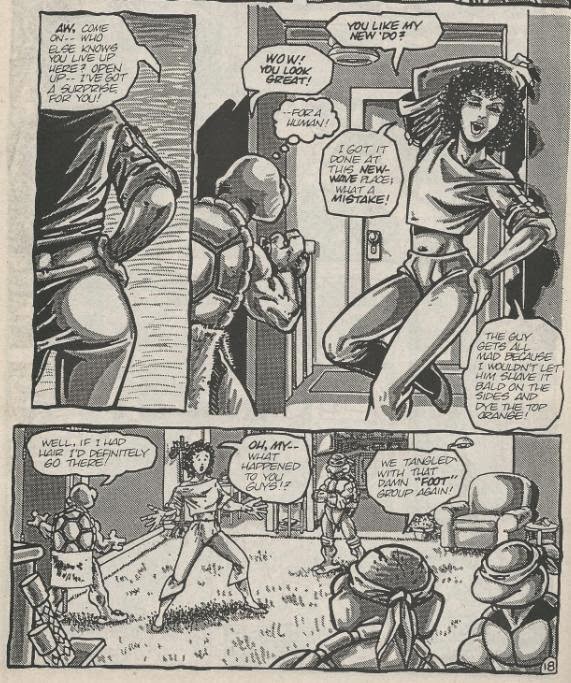 Leo sends Don to retrieve the shattered TCRI canister that mutated them from their display case. The Turtles explain what they’ve discovered to April and that they’re going to temporarily suspend their search for Splinter to investigate TCRI. April wants to come, but they tell her to stay put, as they plan to do some illegal breaking and entering and don’t want her getting in trouble.

The next night, the Turtles return to the TCRI building, only to find it has no ground level doors or windows. They go to the roof of the next building over, throw a grappling line and Don “tightrope walks" over to the roof of the TCRI building. Don spots a security camera and several laser sensors. To get past the camera, he takes a Polaroid of the roof and places it on a holster. He then blocks the camera’s view with a pigeon puppet so that the security guard won’t notice him moving the photo into place (and the security guard doesn’t).

Avoiding the lasers, the Turtles enter the building. Strange writing adorns the walls and the rooms are filled with bizarre, high-tech equipment. The next three floors are all the same until they find a reception area. They find papers with weird schematics and an ID card. Suddenly, a pair of employees enter the room and the Turtles hide. They’re chatting about finishing up a dematerialization device and are excited about “quitting this world”. 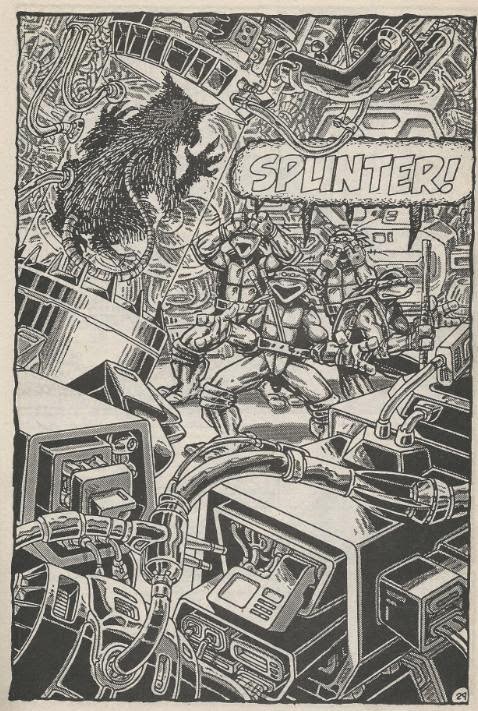 After they leave, the Turtles prowl some more halls and use the ID card to enter the last room. There, they find Splinter held in a glass tube, surrounded by machines. In a break room, the weird octopus monsters in robot exo-suits are alerted to the presence of four intruders. In the lab, Raph thinks Splinter is dead and his body is being desecrated. Don stops Raph from destroying the tube, explaining that the machines are keeping him alive. Then, the aliens in their human-shaped robot bodies enter with laser guns and order the Turtles to surrender. 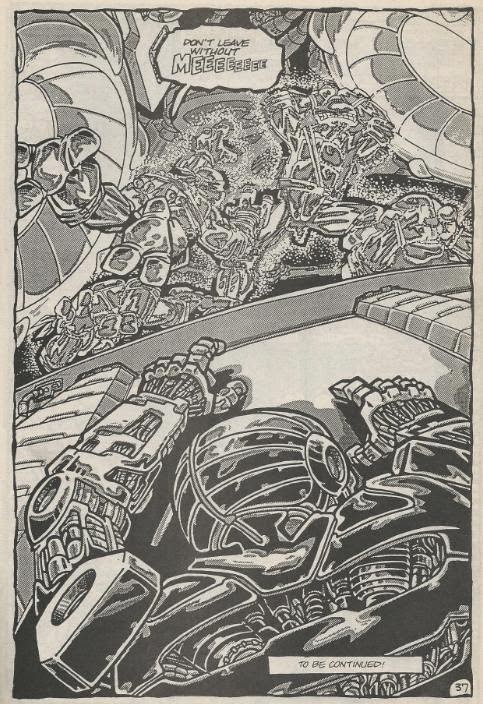 The Turtles refuse and the aliens open fire with their weapons set to stun. The aliens are too nervous about harming their machines to aim effectively and the Turtles escape. The Turtles enter the “translocation matrix chamber” where they're trapped. Mike spots a door and tells his brothers that he’ll distract the aliens while they escape. As the Turtles step over a platform, Mike (still injured from his battle with the Foot) attempts a leap but falls shell-first into a control panel. The aliens freak out, as Mike has accidentally activated their translocation device. Mike watches in horror as his brothers appear to fade away. Not wanting to lose them, Mike jumps onto the platform and vanishes as well.

*A second printing of this issue with a new cover by Michael Dooney and a new back-up story, “The Survival Game”, was published in May, 1987.

*The Turtles have been searching for Splinter since TMNT (Vol. 1) #3.

*The Turtles killed the Shredder and put themselves on the Foot’s hit list in TMNT (Vol. 1) #1. The Foot will strike again in Leonardo (microseries) #1.

*For years, it was presumed that the mysterious man spying on April with a telescope was an agent of the Foot Clan.  Recently, Peter Laird rediscovered original story notes for TMNT (Vol. 1) #11 which included a blurb revealing the identity of the cigarette-smoking figure: "Casey has been developing a serious crush on April.  Since he had started spying on them (back in issue #4), he's been sweet on her".  So yeah.  While it doesn't explain how the Foot figured out where the Turtles were hiding, it does explain how Casey figured it out.  Also, Casey's a total creep (and he smokes?).

*The aliens featured in this story arc are simply referred to as "The T.C.R.I. aliens" throughout. They won't receive the designation "Utrom" until the Palladium RPG guidebook, "The TMNT's Guide to the Universe". The first comic to use the name "Utrom" will be "Terror by Transmat".

*CHET ALERT: “Chet Peace” can be seen written on a building on page 3. “Chet” was an in-joke slipped into many issues of the old TMNT comic as the creators… just liked that name!

This is a favorite issue of mine, which you might find odd, as the space adventure stuff has never been my cup of tea when it comes to the Turtles. It’s more that there’s just a whole lot going on in this story, with lots of action, humor and more of Eastman-Laird’s classic art.

The first time through, it actually came as a bit of a surprise to me when the Foot showed up. I had read the two-issue arc in Leonardo (microseries) #1 and TMNT (Vol. 1) #10 long before I acquired this story, so I had just assumed that the Foot had vanished from the narrative completely after TMNT (Vol. 1) #1, not to be seen again until then. This issue actually does a great job of setting up the vengeance of the Foot with a great rooftop battle and a single ominous panel of a mysterious voyeur. Really, though, I’m just a sucker for TMNT/Foot battles, that’s all.

The manner in which they break into the TCRI building is both ingenious, simple and absolutely hilarious. While the ole “Polaroid in front of the camera” gag is as played-out as the day is long, the pigeon puppet was a superb gag and, well, a great way to work through a potential logic error without being too dry. The callback to their origin is welcomed, though the upcoming outer space arc will only serve as a sort of distraction to the answers readers are probably craving at this point.

Not all of the characters are through developing, either. Leo has already revealed himself to be the stern leader type, Don’s mechanical expertise are all over the place in this issue, Raph has confirmed his badassitude, and Mike…? Mike’s got nothin’, yet. Raph seems to be very close to him in this issue, calling him his “best bud” and showing the most concern when Mike gets injured in the fight. It’s a far cry from their later dynamic, where they’re constantly antagonizing each other, which sort of makes me wonder if Eastman and Laird originally had a different direction in mind regarding their relationship (the close-knit group-within-the group sort of deal). Or maybe Raph was still feeling guilty about nearly caving Mike’s skull in with a monkey wrench last issue. I dunno.

Eastman and Laird’s art really shines in this story and they just go bonkers with all the loose equipment and wires cluttering the TCRI laboratories. The inking can at times make those pages a bit hard to read, as there’s so much mechanical detail, but it sort of adds to the claustrophobic weirdness, too. The Utroms are still some great designs, though these early Utroms look a heck of a lot meaner than they do a few decades down the line. Eastman and Laird still draw a pretty ugly April, I’m sorry to say. On page 18, she’s trying to look ravishing and that just isn’t happening, while on the next page they add so many excessive lines to her face you’d think she was made of leather. Typically, with females in comics, if you want them to look pretty, the rule of thumb is “the less lines, the better”.

Overall, this is a great issue even if it serves as the opener to an arc I don’t especially care for. There’s a whole lot going on and plenty of action from both the ninja and the alien camps. Plus, Michael Dooney’s cover for the second printing is all kinds of kickass. You may recognize it as the box cover for the old TMNT Nintendo game. It’s one of my favorite pieces of Dooney art, no contest.