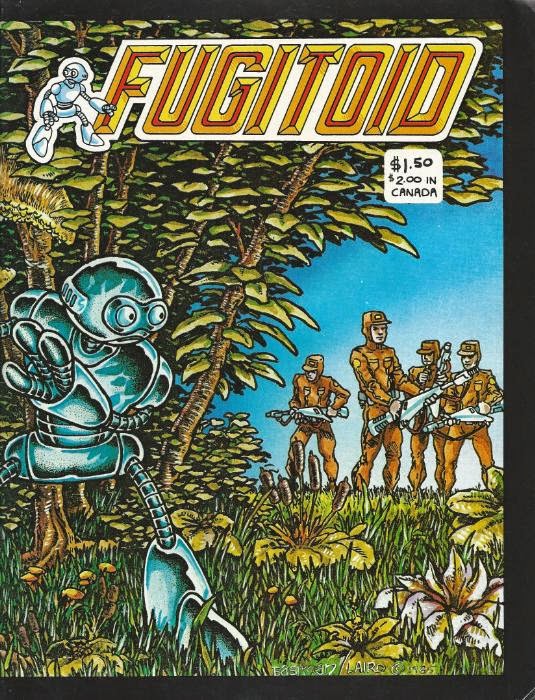 On the planet D’Hoonib, scientist and inventor Professor Honeycut is putting the finishing touches on his new creation: the mentawave helmet, which will grant the wearer telekinesis and telepathy. Suddenly, he’s interrupted by a video-phone call from Federation General Blanque, who demands to know the progress of the “transmat”, a device the military has been funding Professor Honeycut to build for over two years. Honeycutt explains that the device still isn’t ready and then brushes the General off (who swears to come by in person to check on the progress). Honeycut has no plans to finish a weapon and instead focuses on the mentawave, which successfully moves a potted plant on pure thought alone. 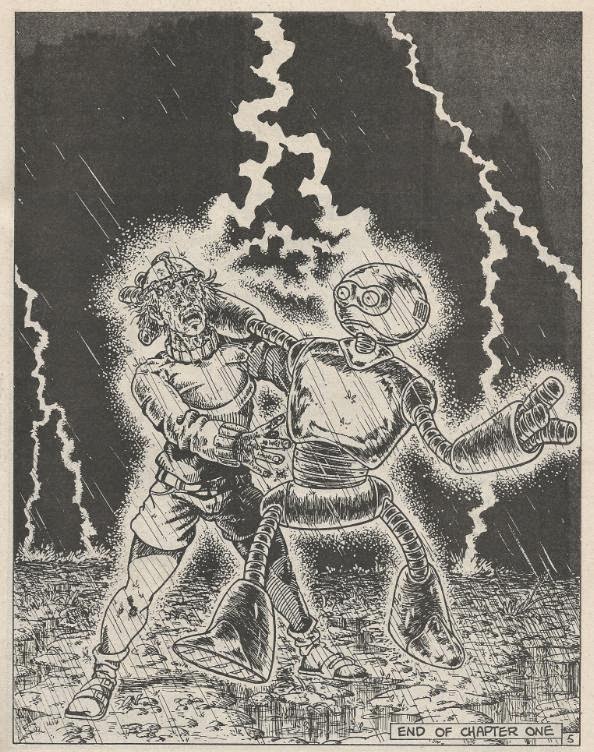 Suddenly, Honeycut hears the thoughts of his worker robot, Sal, who has been caught in some loose cables outside. Honeycutt frees Sal and proceeds to help him inside when a freak electrical storm blasts both creator and creation with a bolt of lightning.

Honeycut comes to and stumbles inside, only to turn on the lights and find himself in Sal’s body! It seems that because the mentawave helmet was in contact with Sal’s mind, the overload from the lightning fused Honeycutt’s consciousness with Sal’s electronic brain. Honeycut is marginally upset. 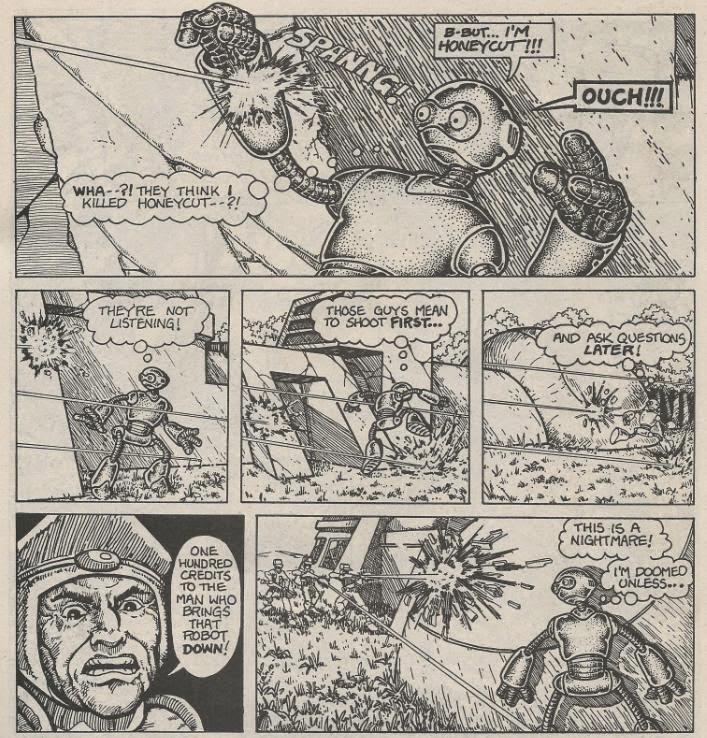 Later, Blanque arrives with a unit of soldiers and finds the charred remains of Honeycut’s body and Sal’s footprints leading away from it. They decide that a rogue robot murdered Honeycut and immediately pursue the first bot they spot: Honeycut in Sal’s body! Honeycut attempts to explain, but the soldiers only proceed to open fire. Honeycut escapes into the nearby forest.

General Blanque sends a unit to pursue the “rogue” and proceeds to investigate the Professor’s lab. He finds the omni-recordex, a log which tells him the whole story of Sal and Honeycut. Blanque considers this a tremendous stroke of luck. As robots have no rights on D’Hoonib, he can capture Honeycut and force him to finish the transmat. 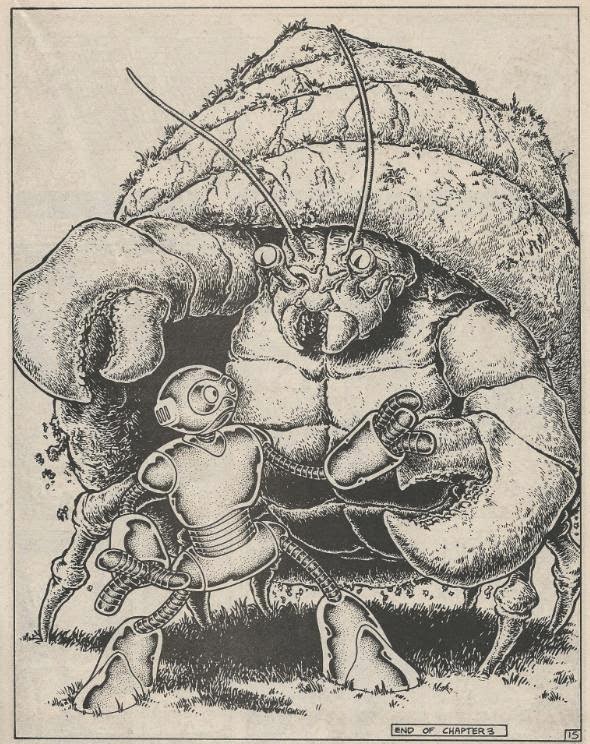 Out in the forest, the soldiers receive a transmission from General Blanque. The “rogue” has now been reclassified as a “Fugitoid”, meaning it needs to be captured in operational condition. Elsewhere, the Fugitoid enters a clearing full of strange, giant conch shells. One of the shells lifts up, revealing a giant hermit crab looming behind him.

The soldiers enter the clearing, and after a quick smoke, decide to leave and come back with some scanners to better search for the Fugitoid. Once they leave, the giant hermit crabs lifts its shell back up, releasing the hidden Fugitoid.

The hermit crab, a benevolent telepath, instructs the Fugitoid to escape to the nearby city of Peblak, where the military’s scanners won’t be able to tell him apart from all the scrap metal. The Fugitoid thanks the crab, swearing to see him again someday, and leaves for the city. 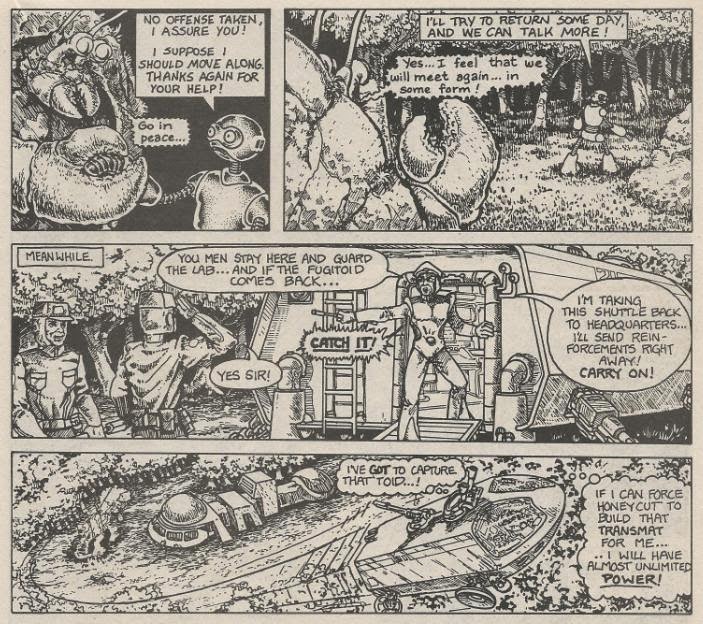 Back at Honeycut’s house, Blanque leaves in his ship for his headquarters on Atkins Island. Along the way, he fantasizes about what he could do with a weapon like the transmat, such as beam weapons directly into a foe’s base and maybe even defeat the Triceraton Republic.

In the scrapyard, the Fugitoid trudges along for miles, unaware that a pair of shifty-looking aliens are on his trail.

At the Atkins Island HQ, Blanque decides to tell his dastardly scheme to the only person within earshot, a female soldier named Lonae. 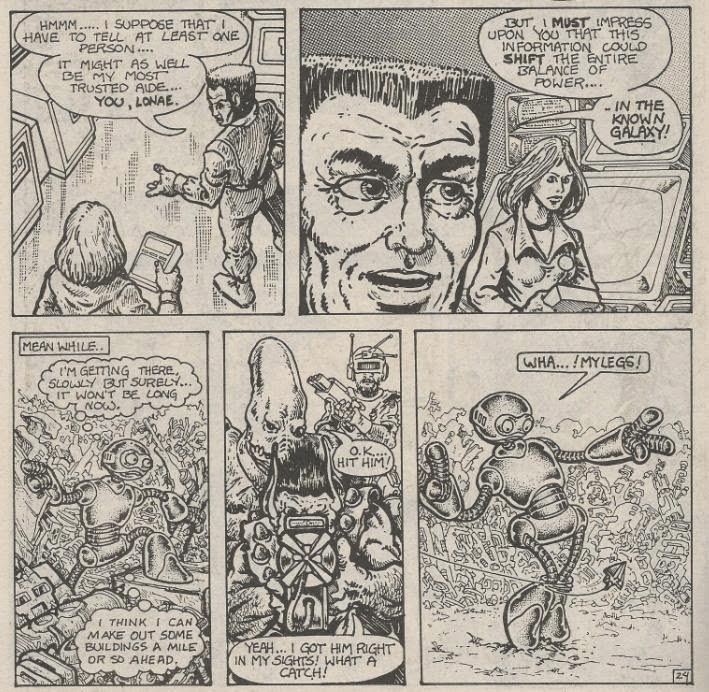 Back at the scrapyard, the aliens make their move, snaring the Fugitoid’s legs in a grappling line and surrounding him.

In Peblak, the captured Fugitoid is being carted along inside a scrap robot transport. He is taken to a used robot auction to be sold. He is sold to a fat human who plans to use him for menial household chores. 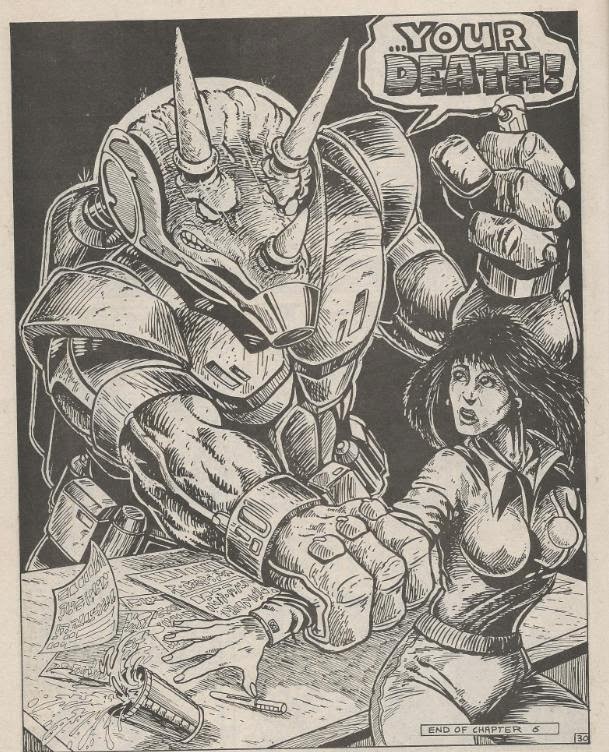 In a bad part of the city, Lonae exits a cab and enters a building, alone. She approaches a Triceraton, planning to sell her freshly-learned military secrets for a hit of the rare Triceraton drug, Xemorene.

Walking down the streets in chains, the Fugitoid decides he’s had enough of such indignities and breaks free from his new owner.

Elsewhere, the Triceraton watches as Lonae injects herself with the drug and dies of an overdose. He explains to his alien partner than no one can know of the Fugitoid, the transmat or his sinister plans. So he vaporizes the alien. The Triceraton Republic wants to get the transmat before the Federation, so the Triceraton soldier sends a micro-probe past Federation lines and into Triceraton space to deliver his findings. 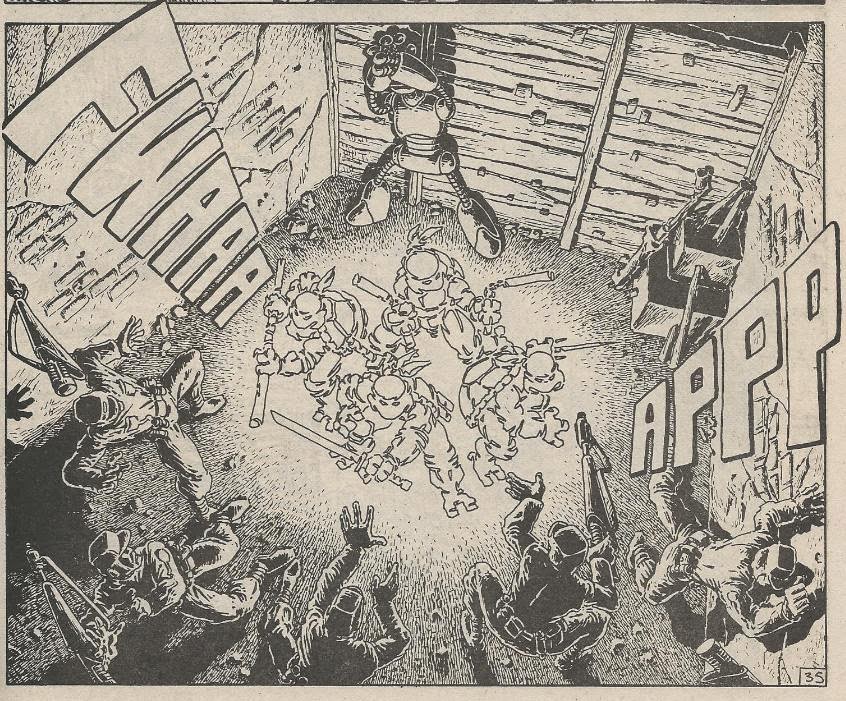 Elsewhere, the Federation soldiers have finally caught up with the Fugitoid and cornered him in an alley. Suddenly, a beam of light comes between the Fugitoid and the soldiers, revealing… The Teenage Mutant Ninja Turtles!

*Professor Honeycutt will investigate the nature of his mind-transference, and see the giant hermit crab again, many years later in Tales of the TMNT (Vol. 2) #54.

*The menta-wave helmet will reappear many years later in the story "The Grape", having been adapted by the Utroms for dangerous recreational use.

*The first 30 pages of the Fugitoid comic were completed in 1983 as one of the first major collaborations between Eastman and Laird. The story was divided into 6 chapters and intended to be sold as back-ups to any eager indie comics publisher.

*This issue contained a bonus pin-up, “Fugitoid” by Peter Laird.

*The Mighty Thor can be spotted on page 34 if you keep your eyes peeled.

*According to the 1987 Palladium RPG sourcebook, "TMNT's Guide to the Universe", the race of "crab people" seen in this issue are more properly known as the Varlesh.

The prologue to the big outer space adventure arc begins here, but does anyone really need to read it?

A bit of a dick thing to say, I know, but all 37 pages of this story are actually summarized so concisely in the first few pages of TMNT #5 that the expanded version seen here in Fugitoid #1 feels rather optional, all things considered. The problem with Fugitoid #1 isn’t that it boasts a bad plot or a bad set-up to the next TMNT story arc, but that the delivery is rather clunky considering this thing was never meant to be printed as a 37 page comic or as a prologue to a TMNT story arc!

Fugitoid #1 is really just a collection of the six five-page back-up strips completed by Eastman and Laird in 1983 to launch a potential ongoing character, plus an additional seventh chapter that connects the 1983 back-ups with the ongoing narrative of the then-current TMNT book. So reading a collection of back-up strips meant to be published months apart from each other can lead to some awkward and redundant entertainment. About every ten pages (every other chapter or so), the characters have to get the audience “caught up to speed” on the current story, thus leading to some ugly exposition. When you’re reading all seven chapters in a row as a singular comic book, the dialogue can be pretty repetitive.

The story-itself, though, is all-too necessary set-up for the space adventure arc the Turtles are about to be thrust into, so even if the Turtles only appear for three pages (well, one panel and then a spread), Fugitoid #1 does a good job of establishing the setting and politics of the mess they’re about to get into. Of course, when you take away all the repetitive exposition and gratuitous pin-ups and splash pages, what you’re left with is enough actual content to fill a flashback in TMNT #5. Go figure.

The art for Fugitoid #1 actually predates Eastman and Laird’s work on the Turtles, so the first six chapters of this comic can look a tad rough when compared to what you’ve already been reading in the TMNT series. Of course, I never felt that way until I actually learned that this issue was drawn before TMNT #1. Prior to that, the art flowed seamlessly during series read-throughs for me. So maybe it’s just the power of suggestion playing with my head? The fact that every chapter has to begin and end with a one-page pin-up, though, results in a lot of wasted space that would’ve been better served for content and plot progression (again, two casualties of the back-up strip nature of the stories being packaged as a full-length comic magazine). The pin-ups range from the impressive and dramatic to the terribly mundane.

Overall, Fugitoid #1 is kind of the odd link in the ongoing narrative of the early TMNT Vol. 1 storyline; a comic written before the Turtles existed being shoehorned into place as part of their series. The conflicting elements of the story, art and presentation keep it from slotting in seamlessly and, while the multitude of pin-ups ensure a quick read, it feels rather boring all the same. If all you have is TMNT #5, I won’t say that you should break the bank trying to track this issue down, as what you get in the flashback scene in that issue is what you get in this issue, only more focused and mercifully condensed.