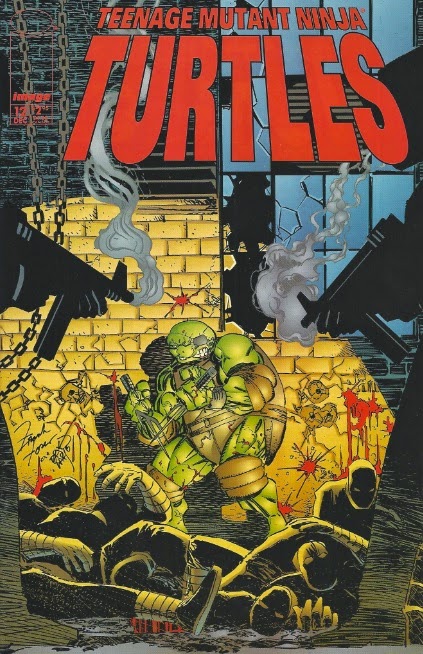 In Vanguard’s satellite/ship up in orbit, Leo and Vanguard discuss life on Earth and Vanguard’s place in it. Apparently, he serves as a watchdog to keep more of his people from invading and conquering the planet, but tries to keep tabs on all alien life entering Earth. Suddenly, Mike barges with his new squeeze: a curvy female mutant Turtle that wants to make-out nonstop. Vanguard orders “Lurch”, a genderless “morphling” to transform back to its gooey amorphous state and stop bugging Mike. Mike proceeds to gag. 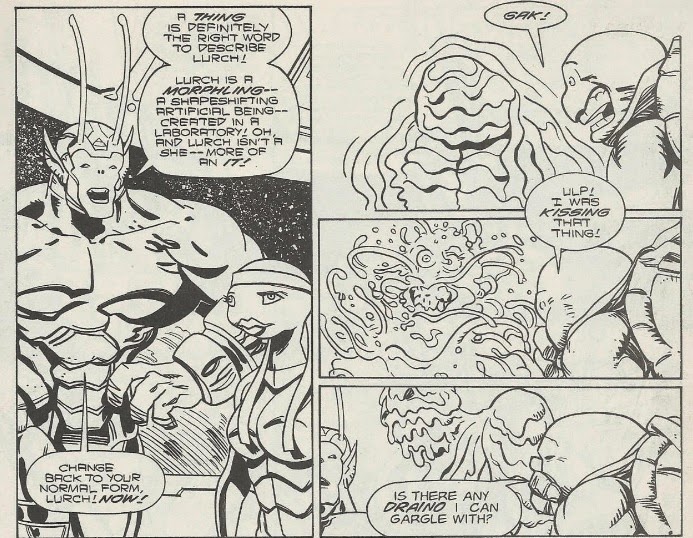 The trio then encounter reporter Roxanne Wells. Leo asks Roxanne for a rundown on just who Raeburn was, as he still isn’t up to speed. Roxanne explains that he was a serial killer from the 70s who was caught and blasted off into space as part of President Carter’s “Seeker” program that used lifers as guinea pigs for space experiments. His ship vanished from communication in 1992 and he hadn’t been heard from since.

The exposition over, Vanguard says that Wally should be just about done with Raeburn’s necropsy and Donatello’s diagnostic, too. Mike and Leo brush Don’s “problems” off, citing his brain death as a non-issue.

Back in New York, a tired Raphael pulls the Triceraton aircar into the disguised mausoleum hanger at their cemetery lair, completely unaware of an unknown individual photographing the whole thing. Entering the sewer, Raph remarks with pride how he took on the “whole” Vicious Circle and won. Too exhausted to make it back to his place, he decides to crash at Mikey’s room located in April and Casey’s apartment. Unfortunately, as he opens the secret entrance, he gets whacked over the head with a baseball bat. 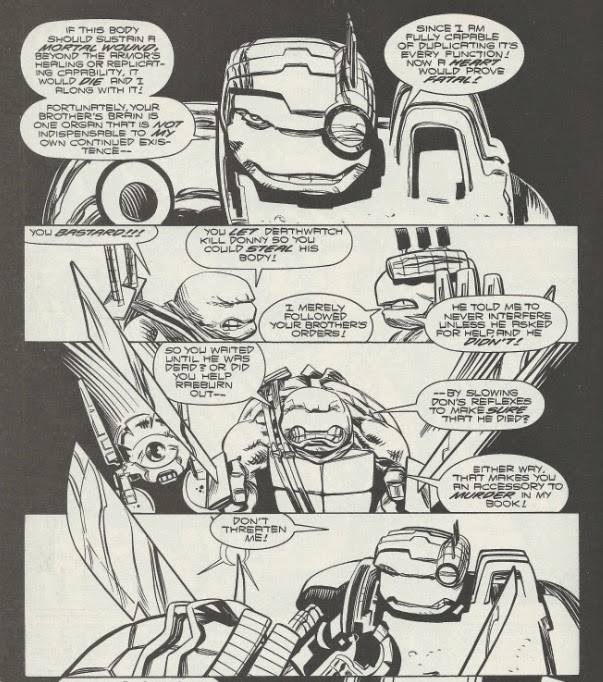 And back at the satellite, Wally assures Leo that Don is completely brain-dead and only the computer within the cyborg armor functions. Leo refuses to believe that a “parasite” like the computer could survive after its “host” has died, but the computer within Don’s body straightens everything out. Apparently, the mutagen in Don’s blood evolved the cyborg armor and its computer, turning into an artificial intelligence as alive and sentient as Don ever was. Leo, believing the computer let Don die, draws his swords. The two come close to fighting it out when Mike cools them down, saying that answers and hope for Donny may lay in the corpse of Raeburn. But Wally has more bad news: the “corpse” was just an exoskeleton decoy and Raeburn has actually escaped!

The Turtles are distraught for a moment, but finally some good news comes from Vanguard: the satellite had tracked Raeburn’s craft when it first returned to Earth and found that it landed in his hometown of Sheldon, Arkansas. Perhaps clues to Raeburn’s current whereabouts, or Raeburn-himself, might lay there. The Turtles join Vanguard and Roxanne in teleporting to Sheldon.

Back at April’s place, Raph has been in bed for over a day, recovering from the blow to the head he sustained. Apparently, Casey was the unknown assailant with the bat; he thought Raph might’ve been one of Puzorelli’s boys looking for Shadow. They thank Raph for offing the mobsters hiding in the van the other day, but Raph assures them he had nothing to do with it. Since the police told the Joneses that the mobsters had been killed by ninja (now how the Hell did the police know THAT!?), Raph decides to pay a visit to the Foot Clan to see what’s going on. On his way out, he gives Shadow a hug and bids her goodbye.

And in Sheldon, the Turtles, Vanguard and Roxanne materialize in a cornfield. They begin searching for clues and find one immediately: a withered corpse strung up like a scarecrow. They then stumble across Raeburn's reentry crater, surrounded by more withered corpses… but no spaceship. 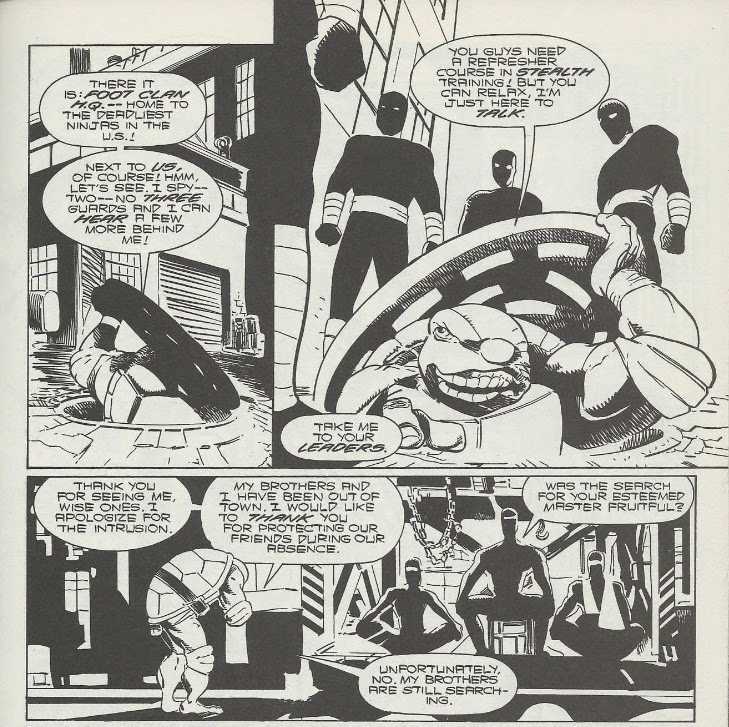 At Foot HQ, Raph emerges and demands the guards take him to the Ruling Council. Raph thanks the Council for protecting the Jones family, though they have a rather unenthused response. Apparently, their actions against the Puzorelli family in aid of the Turtles have ignited a war between the underworld factions. Suddenly, several mob goons burst in with explosives and guns, mowing down Foot Soldiers with a hail of bullets. The mobsters completely wipe out the Ruling Council, leaving Raph feeling guilty; the Council had protected the Joneses while the Turtles were out of town and are now all dead because of it. The mobsters declare their intentions to nail any Turtle they stumble across, but Raph has no plans to run…

*Mike rescued Shadow from the Puzorelli family in TMNT (Vol. 3) #8, inciting the wrath of the mobsters.

*The mysterious photographer will appear again in TMNT (Vol. 3) #17.

*Artist Gordon Purcell drew his own versions of pages 9 and 10 as a sample submission to Image Comics, as he was tapped as a fill-in artist in case Fosco ever fell behind.  Fosco kept on schedule through the whole run, however, so Purcell never drew the Turtles beyond those two alternate pages.  You can see them here.

And one of my favorite subplots from the Image series picks back up as one of the most popular subplots is set in motion! I’ve waxed-on about my love of the “Shadow kidnapping” arc from issues #6 through #8, but in all reality, I’m just a sucker for any TMNT story that’s Foot-related and the whole Raph/Puzorelli/Foot thing was exactly my cup of tea; the urban, gritty, street-level action I prefer from my Turtles. And, I mean, Hell, just look at that cover! Awesome.

Of course, just as many people who enjoy the Foot and mobster-themed stories from the Turtle comics also enjoy the far-out sci-fi and fantasy-themed stories (the old “Eastman vs. Laird” debate, if you will). It’s in this regard that I really want to applaud writer Gary Carlson, as he tries to appease all sects of the Turtles fandom by doing simultaneous arcs following Raph and his urban gang-fighting activities, and arcs following Leo and the rest as they battle cyborg alien vampires. He manages the split focus very well, and there’s something for everyone going on here no matter your preference.

The dye is cast in this issue for one of the most fan-favorite subplots, as the Ruling Council of the Foot is wiped out, leaving a power vacuum within the organization. That vacuum finds someone to fill it rather quickly and it was a choice I loved. But I’ll get more into my feelings on that as it actually happens.

If you’d been reading the letters column in the back of the book for the past eleven issues, then you’ll undoubtedly have noticed a single recurring question: “Will Venus de Milo be in the series!?” Yeah. The Image series had the misfortune of hitting the stands around the same time as Saban’s ill-received “Next Mutation” series hit the airwaves; the series which notoriously introduced female Ninja Turtle Venus de Milo into the fold. Larsen assured readers over and over again that Laird implemented a strict “no girl Turtles” policy when the book was conceived, but the damn question kept rearing its ugly head anyway. So, appropriately-enough, this issue began with a pretty amusing two-page knock at both Venus and the people who liked her.

But now I’m going to complain. Last issue saw the swan song of inker Andrew Pepoy, leaving this issue to introduce us to his replacement: Mark Heike. While Heike has his strong suits, he’s far too “clean” of an inker for the kind of pencils Frank Fosco provides and the dark and gritty atmosphere that this book had been going for until now. While he does manage to accentuate Cyborg-Don rather well during his conversation with Leo, elements of horror fall completely flat near the end; the scarecrow corpse in particular. And if you need a better visual aid in regards to what I meant by “clean”, then, well, just look at this: 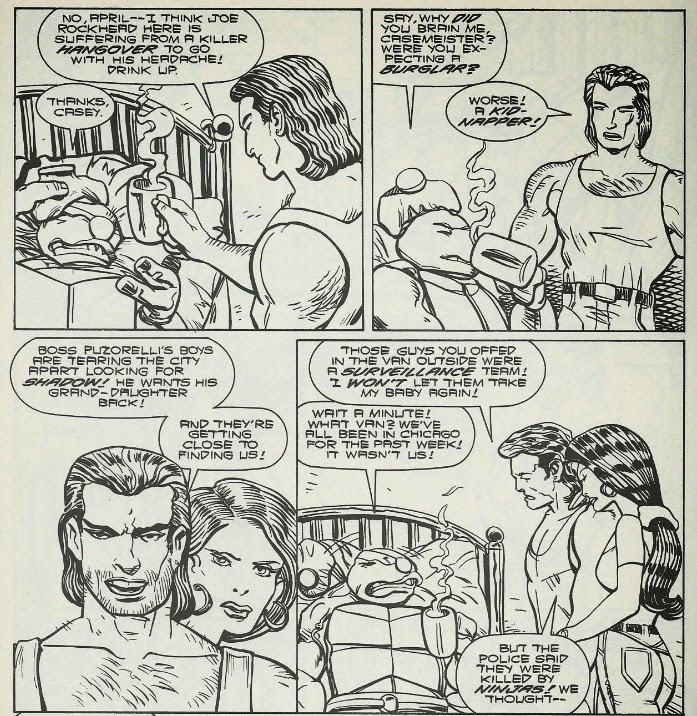 While I’m not going to say the guy was a bad inker by any measure, it’s just more that his approach was a little jarring and took some getting used to.

Anyhow, even with the completely ludicrous Raeburn/Deathwatch arc still trudging along, issue #12 succeeds anyway by offering some variety with the renewed Foot/Puzorelli arc. And for what it’s worth, the jab at Venus was pretty funny.

Grade: B- (as in, “But I still have no idea just what the hell Josh Eichorn actually did”.)