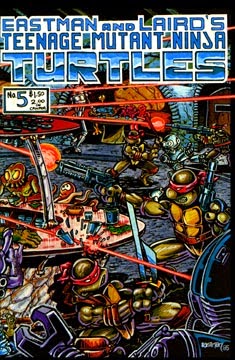 “Teaming Up with Fugitoid” (title taken from official TMNT website)

The Turtles are groggy and confused after their transmat trip across the galaxy, but not too much of either to fail to recognize the danger posed by the gun-wielding troops of General Blanque. Not waiting to get perforated, the Turtles spring into action; something that intrigues the Fugitoid, whom they are unintentionally aiding. As the Turtles make short work of the Federation troops, the Fugitoid plows through a rotted wooden wall, forging an escape route. As more troops arrive, the Turtles follow his lead. The quintet makes it to the roof of the building, where they proceed to jump into the open bed of a passing dump truck and make their getaway. 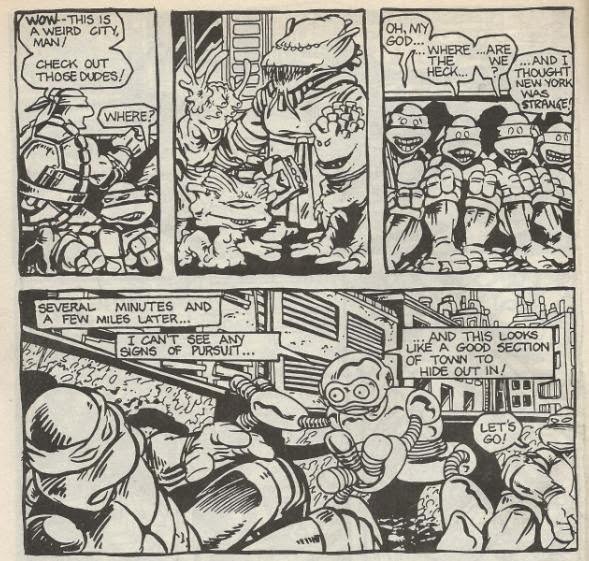 The Turtles survey their surroundings and are shocked to discover that they’re on another planet (the planet D’Hoonib in the city of Peblak, to be precise)! The Fugitoid leads them to an abandoned building where they can cool off for a while. While on the roof, the Turtles tell the Fugitoid (alias, Professor Honeycutt) how they were teleported to his planet in the midst of battle. The Fugitoid finds their talk of another transmat very interesting and relays his life story to them. 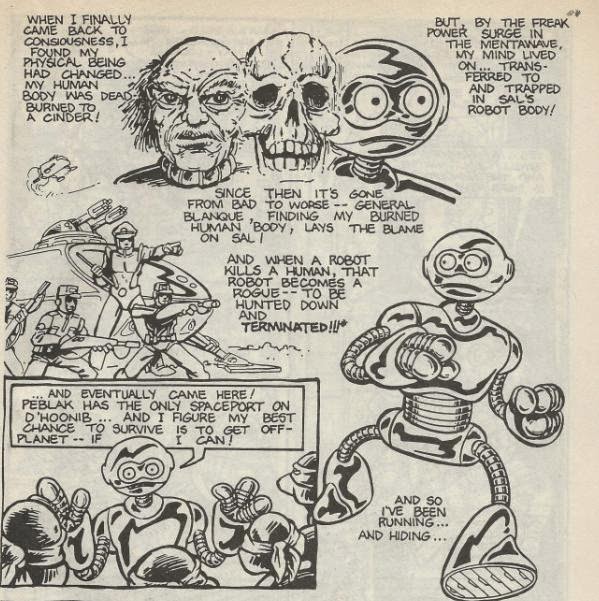 After comparing notes, the Turtles and the Fugitoid decide to find a spaceport in Peblak and get the heck outta Dodge; and once they’re in the clear, the Professor can find a way to send them back to Earth with his Transmat. A few hours later, they come upon a bar called Portenroy’s where they hope to procure safe passage with a pilot.

Simultaneously, and unaware of each other, General Blanque orders his Federation troops to scour the city for the Fugitoid and his coconspirators while the Triceraton troops have already spotted the robot in Sector B14 and ready their Shock Commandos for containment. 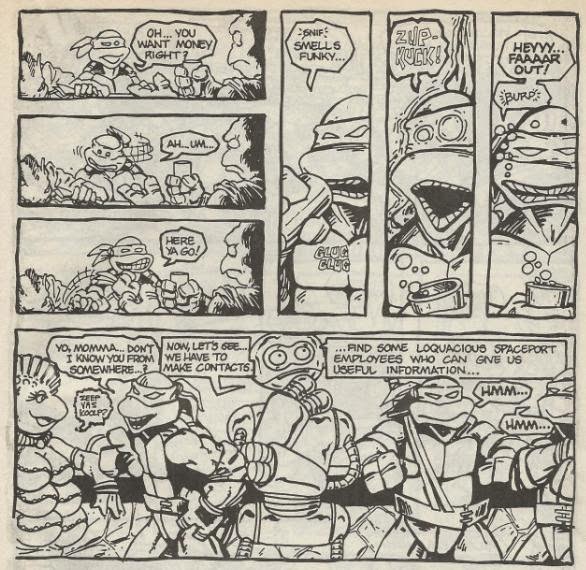 At the bar, the Fugitoid attempts to find a ship Captain in need of laborers while Raph gets wasted on the local brew and begins hitting on a six-breasted alien. Their efforts are interrupted when Federation soldiers barge in and open fire. Pinned behind the bar, all hope seems lost when the Triceraton Shock Commandos burst through the ceiling, snatch up the Fugitoid and hightail it out of there. The Turtles give chase and commandeer an aircar. Don’s driving could use some work, however, and the Triceratons make serious distance. As the Turtles pass over a forest, they are met with the jet-pack-rockin’ Triceraton Rear Guard. The Turtles take out one Triceraton, but are quickly sent plummeting to the forest below when their aircar is disabled.

Luckily, the trees break their fall. The Turtles then decide to follow some Federation troop ships flying overhead in hopes they might be following the Triceratons. Their suspicions prove accurate, as they immediately stumble upon an all-out battle between the Federation and Triceraton troops. Leo spots the Triceratons toting Honeycutt into a bunker and, after grabbing some blasters and opening fire, the Turtles clear a path to the base. Inside the “bunker”, the Turtles find themselves within a massive cargo hold. No sooner do they realize something doesn’t add up, the “bunker” begins to rumble furiously. The “bunker” turns out to be a concealed spaceship and the Triceratons fly off into space with the Fugitoid and, unknowingly, the Turtles as well. The Triceratons make it past a Federation blockade and, once in the clear, the Captain orders the Fugitoid to be brought to him. The Captain reveals he knows that the Fugitoid is indeed Professor Honeycutt (and that General Blanque knew the whole time, too) and welcomes him to merely one asteroid base of the Triceraton Republic (a massive cone-shaped floating city).

Down in the cargo hold, the Turtles float in zero gravity, but their biggest concern is the sudden lack of oxygen…

*This story is continued from Fugitoid (microseries) #1. The story continues in TMNT (Vol. 1) #6.

*The Turtles were teleported across the galaxy in TMNT (Vol. 1) #4.

*The back-up strip, “D’Ants Fever” takes place between pages 13 and 14 of this issue.

*Cerebus can be spotted amongst the bar patrons on page 16. The Turtles will meet Cerebus in TMNT (Vol. 1) #8.

*The second printing of this issue (November, 1987) contained a new cover by Michael Dooney, a bonus pin-up by some guy named “DAARC”, a new back-up story, “Ghouls Night Out” by Eric Talbot, and several "special announcements". Additionally, the duo-tones for the second printing appear to have been removed for some reason.

The space adventure arc of TMNT (Vol. 1) hits full-swing with this issue, as the various plot threads set-up in TMNT (Vol. 1) #4 and the Fugitoid (microseries) #1 come to a head and business gets rolling!

My very first encounter with this story arc was the adaptation seen in the 4Kids cartoon series, which I came away from with a healthy dislike. As presented in the cartoon, it simply rubbed me the wrong way and seemed to drone on for far, far too many episodes. That reaction, of course, colored my response to the story arc as presented in the original Mirage comics when I finally read it sometime later. Unfair, I completely realize; but nevertheless, I tended to disparage this arc with righteous indignity (well, that’s going a bit too far). Rereading it now, from a bit more of an objective standpoint, it’s a very fun and exciting tale and far more enjoyable in presentation than the 4Kids version.

The Turtles react appropriately and amusingly to their bizarre predicament and it offers a rare bit of genuine comedy not seen in many of these early Mirage issues (Eastman and Laird were excellent artists, inkers, storytellers and idea-men, but comedians? Not exactly). Their reactions, mixed with the brief allusions to “Star Wars” (and not so obnoxiously overdone here as in the 4Kids version) provide some refreshing levity amidst a very action-oriented issue. One of the most interesting moments in the issue, I felt, was also one of the briefest. While searching for a bar, Leo tells Honeycutt how he and his brothers must hide from the world on their home planet. He then brings up the tragic irony that now that they’re on an alien planet where they can finally fit it, they still have to hide due to their status as criminals. A conversation that lasts two panels, but relays a superior sensation of “man, it sucks to be them” to the audience than even the cliffhanger where they’re all suffocating to death.

Art-wise, the Triceratons are as boss-looking as ever. They’re especially cool when in their atmospheric adapting gear, with their sweet glass-domed helmets that let their horns stick out. The bar scenes, which are meant to invoke the Most Eisley Cantina from “Star Wars”, fall a tad flat on a visual-level if you’ve read the insert story, “D’Ants Fever”, which just does the overflow of weird aliens and creatures in a bar setting so much better. Regardless, it still gets the job done and I swear that’s The Grimace in the background of page 19.

Character-wise, the Turtles are really starting to take form. Mike’s beginning to show signs of his immature goofy side as he mocks the Federation troops in order to provide Don with an opening. Raphael is cool but rude, Leonardo leads, Donatello does machines, etc. etc. Though what’s interesting about these early issues is how brutal the Turtles can be. Raph uses an alien bar patron as a shield when the troops open fire, effectively getting him killed (and stealing his blaster in the process). Don impales two Federation troopers in the chest with hunting knives in one scene, which considering the more modern interpretations of the character as being the gentle nerd, might come as a shock.

What I really want to talk about now, though, is the second printing of this issue. Released in November of 1987 (though that’s just the cover date; the official Mirage site says it actually came out in May of that year), you may never find a better “slice of time” in Turtle history. The opening editorial consists of Laird reminiscing about the four years he’s had with the Turtles and how Mirage has grown from two guys in a living room to six guys in a four-room office, with plans to move to a bigger facility on the way (though that darn Michael Dooney still refuses to move outta New Jersey and join the club, curse him). Editorials like this one are great fun to read, as they’re so wide-eyed and genuinely optimistic about the future of the franchise, especially being written right at the threshold of the TMNT’s impending cultural phenomenon status.

Indeed, if you skip past page 32 of the comic, you’ll be greeted with a Special Announcement. It is here that Laird reveals to the world all the new and exciting things coming in the world of Turtles; the Palladium Books RPG, the Playmates toyline, the Murakami/Wolf/Swenson animated series, the Archie comic and the buttload of merchandising that you likely remember dominating your entire childhood. It’s all presented in a “coming soon” sort of way and is just, I dunno, captivating to read, especially when Laird starts describing new characters like Bebop and Rocksteady.

You also get a two-page spread showing off the entire first wave of Playmates toys with a lengthy description of the line that reads more like a trade magazine summary than an actual advertisement.

The editorials and announcements seen in the second printing of this issue really come across as a milestone. This was the moment when the Turtles transitioned from indie comic status to global marketing machines. When you pick up the issue and read through all the sincerely optimistic blurbs about the characters and their potential future outside of black and white comics, you can’t help but stop and think, “wow”.


Grade: B (as in, “But that photo is bullshit. The original Shredder toy cannot stand up on its own power! It can’t!")