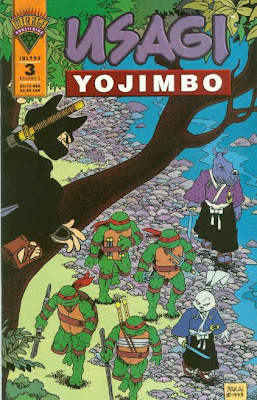 At the Neko Ninja clan’s HQ, Chizu is concerned over the number of troops they lost in the invasion of Kakera’s village, to say nothing of the number Gunji dismissed into the hills to lead his adversaries astray. Gunji waves away her concerns, insisting that his plan to secretly steal Kakera away to Neko Ninja clan territory under the guise of woodcutters is fool-proof. Smug, Gunji reminds her that should he succeed, he will seize full leadership of the Neko Ninja clan and Chizu will have no place among them save as his “consort”. Disgusted, Chizu leaves.

In the forests nearby, the Turtles, Usagi and Gen follow Leonardo back to the Neko Ninja HQ. Leo, however, is still recovering from his wounds and is having trouble walking. Don promises the others to keep Leo out of the fight while Gen doubts Leo even knows where he’s going. Suddenly, Gen slips on a trap, leaving Raph to save him from an onslaught of poisoned darts. 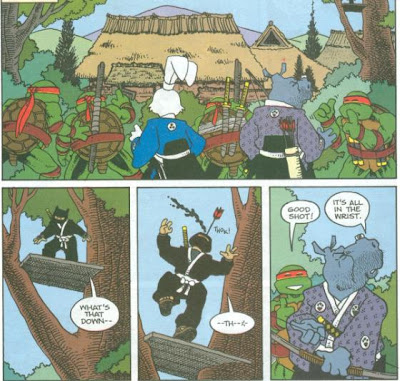 Soon after, they arrive at the Neko Ninja HQ and fight their way past the few remaining sentries. Attempting to lead the ninja away from Leo, Don winds-up cornered by his foes. Suddenly, Leo bursts onto the scene and chops down the ninja, saving a very startled Don. The Turtles and Gen fail to find any trace of Kakera, however, Usagi notices some suspicious wagon tracks and gives chase on his own.

By a waterfall, Gunji, Chizu and their plain-clothed henchman pull a wagon of sticks behind them, with Gunji certain his ruse has succeeded. As Chizu stops to clean her face in the stream, Gunji has his men encircle her, deciding not to take any chances on leadership of the Neko Ninja clan. Before they can strike, Usagi arrives and Gunji orders his men to deal with the rabbit while he duels Chizu. As Usagi takes down the Neko Ninja, Chizu slays Gunji.

Chizu then approaches Usagi, saying that her brother, Shingen, spoke highly of him after he aided the Neko Ninja clan in the Dragon Bellow Conspiracy. She has one more surprise for Usagi, laying a big kiss on him. Chizu then departs, telling Usagi he can have Kakera. Usagi digs Kakera out of the pile of sticks on the wagon as the Turtles and Gen finally catch up.

Epilogue One: The Turtles bid Usagi and Gen good bye, hoping to see them again sometime in the future. As Raph insists, “Next time… Our place!”, Kakera casts his spell and the Turtles return home, leaving behind the four normal turtles that had been collected from the river the previous day. 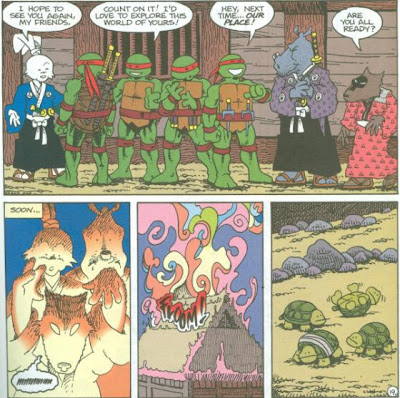 Epilogue Two: As Usagi and Gen leave the village, Gen wonders if Kakera is safe from the Neko Ninja clan. Usagi says that he got an assurance from Shingen’s sister, which is good enough for him. That out of the way, Gen decides to head after a bounty up north while Usagi chooses to travel east. The pair bid farewell and part ways.

*Usagi will meet the IDW Turtles in TMNT/Usagi Yojimbo #1.

*In the letters column, Sakai reveals that the plot for “Shades of Green”, an homage to Kurosawa’s “Seven Samurai”, was created two years prior to Usagi Yojimbo’s switch from Fantagraphics to Mirage. Originally, the part of Gen was to be played by Tomoe-Ame.

While Chapter Two had most of the big action in it, Chapter Three of “Shades of Green” ends with some well-drawn skirmishes and a nice epilogue.

I rather got the feeling that this was never meant to be the last TMNT/Usagi crossover in the comics, as the other Turtles spend most of the issue warming up to Gen and learning about Usagi’s world, sort of whetting their appetites for future adventures. Alas, further exploits on the printed page were never meant to be, though I did enjoy all the crossovers we got in the 4Kids animated series quite a bit.

Overall, “Shades of Green” cruises by very quickly for a three-issue story, though most of Sakai’s Usagi comics tend to be quick reads. His style of storytelling is somewhat decompressed (though not obnoxiously so, like most manga) and he prefers to tell the story through highly visualized action sequences over characters prattling on about what they’re doing as they’re doing it in order to pump more plot into a limited amount of page space.

But this more cinematic approach really gives you time to stop, look and appreciate the characters and the world they live in. The page-long views of the surrounding environment and the limited amount of dialogue per panel, allowing you to watch the characters’ expressions change with each new line, really let you invest in the story and its players.

“Shades of Green” may not be one of the best Usagi stories ever written, but I’ve also never read an Usagi story I didn’t like, either. It’s a very fun TMNT tale, even if it doesn’t really give the characters enough time to explore the strange new world they’ve landed in. Hopefully, if you TMNT fans do go out and read it, it’ll act as your “gateway drug” into the Usagi Yojimbo comics as it did with me.

Grade: B+ (as in, “But the Neko Ninja can aim about as well as the average Storm Trooper”.)