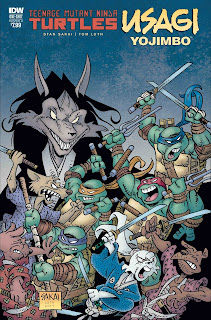 "Namazu, or the Big Fish Story"

In another world, rabbit bodyguard Miyamoto Usagi is protecting travelers from a gang of highway bandits.  The travelers thank him for saving their lives and one mentions that a wise old man told them that they would be protected on their journey.  Curious, Usagi goes to visit the old man in the grotto where the travelers say they met him.  Along the way, Usagi is caught in an earthquake, the most recent in a string of them. 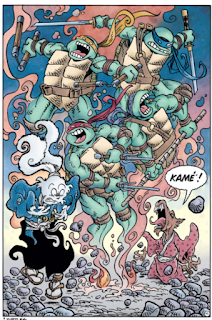 Arriving in the grotto, Usagi is met by Kakera-sensei, an old mystic whom he hasn't seen in some time.  Kakera tells Usagi that he needs his help in performing a task, but that Usagi's might will not be enough; he'll need companions.  Knowing whom Kakera is referring to, Usagi gathers four turtles for the summoning spell.  Kakera performs the spell and the turtles are transformed into the Ninja Turtles, brought over from their own world.

Usagi is eager to greet his old friends, but the Turtles get startled and attack him.  Kakera realizes that he summoned the wrong Ninja Turtles and performs a spell that allows them all to speak the same language.  Kakera and Usagi soon explain themselves and the Turtles agree to help.  As they travel, Kakera tells them the story of Namazu, the giant catfish that lives beneath Japan, whose movements cause earthquakes.  The thunder god Kashima-no-Okami pinned Namazu beneath a massive stone called the Kanameishi to stop him from moving, but a small piece of the boulder has broken off.  Kakera has come into possession of this fragment and must return it to the Kanameishi, which has been leaking power and thus allowing Namazu to become mobile again.  Alas, he fears that evil forces are out to prevent him from restoring the Kanameishi. 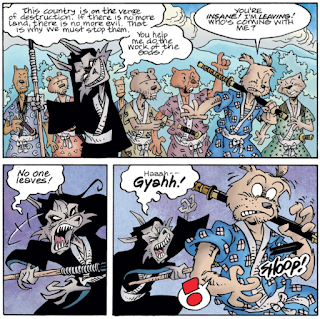 And he's right!  The demonic figure (and Usagi's old foe) known as Jei has gathered a small army of ne'er-do-wells to hunt down Kakera and thwart his mission.  Jei is on a "divine" mission to destroy all evil in Japan and figures if Japan is destroyed, there cannot be anymore evil in it (he's crazy).  Jei slays one henchman who speaks out of turn and the rest follow him in fear.

Later, the Turtles, Usagi and Kakera arrive at Kashima Shrine where the Kanameishi is located.  Unfortunately, Jei and his bandits stand in their way.  A massive brawl erupts and the Turtles and Usagi clear a path so that Kakera can reach the Kanameishi.  Kakera recites the ritual chant and is about to place the rock into the Kanameishi when Jei appears behind him, poised to strike.  Leo and Usagi are too late to stop him, but Kakera finishes the ritual just in time.  There is a huge explosion as the Kanameishi sinks back into the earth (re-pinning Namazu) and Jei vanishes in the chaos. 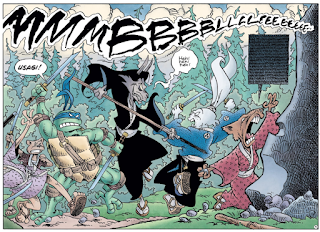 Kakera and Usagi thank the Turtles for their help, and though the Turtles would like to stay and explore for a bit, Kakera insists that it is time they leave.  Bidding farewell, Kakera repeats the ritual and the Turtles are sent home, being replaced with the normal turtles.  Usagi gathers them up to release them in a safe pond and parts ways with Kakera.

*Leo mentions that Mikey is the only one of them who can speak Japanese.  This character trait was introduced back in TMNT: The Secret History of the Foot Clan #4.

*This one-shot was released in both soft and hard cover formats.  The hard cover edition contains an exclusive cover by Stan Sakai, additional notes, sketches, layouts, interviews and a reprint of "Turtle Soup and Rabbit Stew".

Do you know how long its been since the Turtles and Usagi have had a legit comics crossover?  Twenty-four years.  Yeah, there have been some pin-ups by Sakai that were published in the back of Tales of the TMNT here and there, but there hasn't been a crossover story told in comics for over two decades.  We've had to wait a long time to see Usagi and the TMNT unite under the pen of Sakai (though there were those crossovers in the 4Kids cartoon to tide us over) and while this tale might be rather inauspicious, it feels like a big deal to those of us who have spent the better part of 20 years wondering when we'd get another one.

Usagi Yojimbo is one of those comics you don't hear people talk about all the time because... everybody likes it.  It's consistently good and as a result, since there's never anything to complain about, everyone just reads it and enjoys it and shuts up about it.  No controversies, no insults, no politics, no bullshit.  Just good comics everyone loves.  That's one of those things I truly respect about Sakai's work, and while maybe it keeps Usagi Yojimbo from making headlines, he never sacrifices the quality of his narrative for short-term publicity.

But maybe that's why people who aren't familiar with Usagi don't get what the big deal with this one-shot is.  You kind of have to read Usagi Yojimbo to understand why it's so beloved, sort of like Jeff Smith's Bone, but once you do you'll get why fans dig these crossovers.  And at any rate, Usagi has been something of an unofficially official part of the TMNT mythology and roster since near the beginning.  Beyond the comics, he's appeared in every Ninja Turtles cartoon and three incarnations of the Playmates toyline.  He's as much a staple to the expanded roster as Leatherhead and the Rat King.  It would be weirder if Usagi DIDN'T show up in each iteration.  And that's probably why whenever the Turtles get rebooted or revamped for a new generation, the first question from fans is, "So when's Usagi gonna get here?"  We expect him.

What's even more notable about the release of this one-shot is that it acts as something of a multimedia tie-in.  Usagi made his much-belated appearance in the Nickelodeon cartoon just last week, in the season 5 episode "Yojimbo".  Now, in the midst of a three-part crossover story arc on television, IDW has released this crossover one-shot.  And at the same time, Playmates is shipping a new collection TMNT/Usagi toys to stores.  It's something of a big push for the character from Viacom, Playmates and IDW.

But let's actually talk about this comic.  I called the story "inauspicious" earlier, and I didn't mean that as a detraction, just that the story isn't necessarily "big".  This is the sort of thing Usagi deals with all the time and it isn't his grandest, most sprawling adventure.  Really, the Turtles and Usagi go hiking, get into a quick fight with some thugs, and then go their separate ways.

What makes this such a good read is more on the merit of Sakai's cartooning and storytelling.  He reminds me a lot of Carl Barks in that he only uses as many words as is needed to tell the story.  Characters never talk too much and there's only as much narration as is efficiently needed to orient the reader.  While this often makes his comics quick reads (these 40 pages will fly by), it also makes them organic reads.  The characters are livelier for the things they DON'T say and the illustrations tell the story and build the world on their own without crude exposition laid overtop of everything.  And while it is a quick read, Sakai fills his panels with content, especially in the big brawls, and you'll want to take your time to inspect each panel and see how all the action is laid out.

Speaking of action, the Turtles sure look like they kill a few of those bandits Jei hired.  Whatever happened to that "no killing policy", I wonder?  Then again, while we do see the victims screaming and clutching wounds, none of them deliver the trademarked skull-and-crossbones speech bubble, which is how Usagi comics confirm death.  So hey, maybe they just got cut real bad.

I suppose there isn't much else to say.  It's a good comic, but much like most other Usagi Yojimbo comics, I suspect people are going to read it, like it and then shut up about it.  The door is left open for future crossovers and I hope we get them in the IDW book some day.  At least in under two decades.