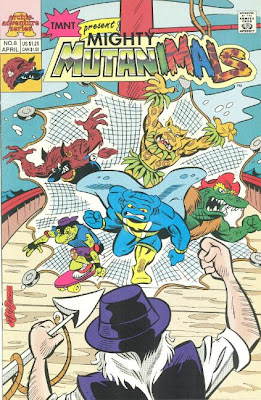 On the beach, Jagwar bids a tearful goodbye to Juntarra, who must leave to continue the Path of the Four winds. Since she is the only one with the medicinal skill to treat Kid Terra’s bullet wound, the cowboy will be joining her for the rest of her journey. 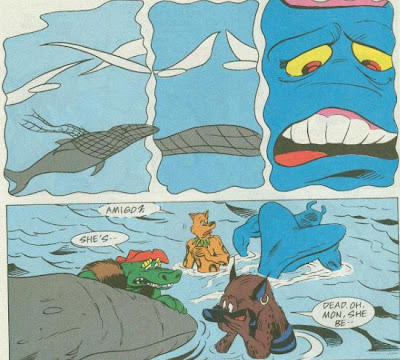 A few days later and the Mutanimals are still relaxing on the beach when Man Ray decides to go for a swim. Shortly out to sea, he finds a minke whale caught in a net. He calls the other Mutanimals who swim out to help him free the whale, but unfortunately they arrive too late and she dies. Enraged, Man Ray explains that whaling has been internationally banned, though Norway and Iceland do not recognize the ban on minke whales specifically and continue to hunt them for profit. Man Ray and the Mutanimals decide to hop in some canoes, find the whalers and put a stop to them.

Arriving at a port town, Man Ray says that they’ll need to steal some motorboats to continue their hunt further out to sea. The other Mutanimals are hesitant to steal, but Man Ray insists that their quest for a greater good supersedes any lesser crime. So with Screwloose’s lock-picking skills, they break into a supply shop and steal some motor rafts. Meditating and listening to the sea, Man Ray detects a whaling operation ten miles south east. The Mutanimals head in that direction. 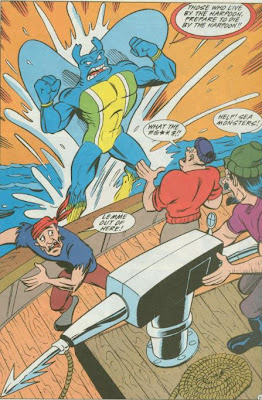 Eventually they find a whaling vessel about to harpoon its next target. The Mutanimals storm the ship and beat up all the crewmen. Suddenly, Captain Mossback steps out, revealing that not only is he head of this whaling operation, but that he’s been legally hired by the Norwegian government to do so; it is Man Ray and the Mutanimals who are breaking the law in this situation. Man Ray could care less about breaking laws at this point, and Mossback is fine with that, as he’s been craving vengeance ever since Man Ray broke up his illegal shrimping operation and sent him to prison for two years. 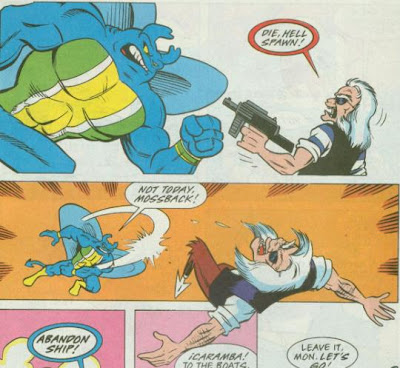 As the fight continues, Mossback’s ship crashes onto a reef and begins to sink. The Mutanimals escape on their rafts while Mossback and his men escape on their lifeboats. As the boat sinks below the waves, Man Ray begins feeling regret over all the violence he’d committed in order to seek justice, lamenting that “justice is a double-edged sword”.

*Yes, that is Popeye the Sailor shouting “abandon ship” on page 27.

Man Ray is TMNT Adventure’s number one mouthpiece for environmental messages. Every story he stars in centers around pollution or illegal shrimping or whaling or toxic waste dumping or whatever. Whether it be Murphy (Clarrain) or Nutman, whoever it is that’s writing a Man Ray-centric story can only do so with an agenda in mind. In that regard, Man Ray stories can be very annoying to read, as they’re determined to ramrod a message about environmentalism down your esophagus, and as a consequence, Man Ray is a hard character to like.

The message in this story is cloudy and ill-defined. “If your goal is righteous then commit all the lesser crimes you want”? What if, instead of taking the rafts from the supply shop, they’d stolen money from an ATM in order to buy the supplies? Would that have been okay? Why must the guy who owns the supply shop and has nothing to do with Mossback’s operation suffer just because Man Ray is thirsty for vengeance? What if stealing those two very expensive rafts destroyed the shop owners business and he could no longer feed his family and they all starved to death? But hey, let em starve just as long as a handful of whales are okay, right? Oh, but wait, Mossback wasn’t breaking any laws and all Man Ray did was sink his ship; nothing to keep him from going right back out and doing it again (and getting paid for it, too). It’s sort of like watching that show “Whale Wars”, where the Green Peace rejects ram Japanese whaling ships for half an hour. Being a nuisance may make them feel better on a personal level, but they aren’t actually accomplishing anything.

At the end, Man Ray’s pang of guilt seems half-hearted at best; like he’s more upset that he sank a boat and polluted the sea than hurt an innocent person’s livelihood back on shore. The rushed crisis of conscience paints Man Ray in a pretty unflattering light, to say nothing of Nutman, who seems like he genuinely encourages people to commit crimes if it’s for a “greater good”.

Sending a terrific message to the kids, guys.

On the other end of things, Ken Mitchroney turns in some great pencils. This would be his only issue of the Mighty Mutanimals ongoing and his first time drawing any of the characters in quite some time. As he was on his way out of TMNT Adventures when Mighty Mutanimals started, this issue really leaves me wishing he’d been the regular artist on this title. Nothing against Garrett Ho or Mike Kazaleh, as their styles have their charms, but they were way too “slick” and undetailed for me, especially in the backgrounds and environments. Their layouts don’t hold a candle to Mitchroney’s, either, and he turns in some superbly dynamic pages for this story. Since TMNT Adventures wasn’t using him anymore, I really wish he’d have migrated over to Mighty Mutanimals, even if the book only lasted nine issues (hey, maybe it would've gone for more if Mitchroney had been on art from the beginning?).

“The Cruel Sea” is just another Man Ray issue, meaning it’s everything that’s terrible about TMNT Adventures. As a matter of fact, thanks to the moral ambiguity of the whole thing, it actually crosses a line that even the preachiest issues of TMNT Adventures never did, encouraging kids to commit misdemeanors if it means helping the environment. In that regard, “The Cruel Sea” is something of an all new low for the series.

Grade: F (as in, “For Christ’s sake, Popeye would never abandon a sinking ship. Who do they think they’re fooling?”)