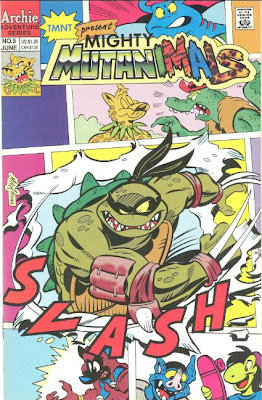 Down in Rio de Janeiro, the army is having a rough time with a particularly violent individual: Slash, the evil turtle from Dimension X! Wreaking havoc all across the city, Slash wants only two things: palm trees and solitude. The military isn’t about to give him either and send in the tanks. Slash topples the heavy artillery and threatens to devour their entrails. The military eventually knocks him out with a 1300 megaton warhead. 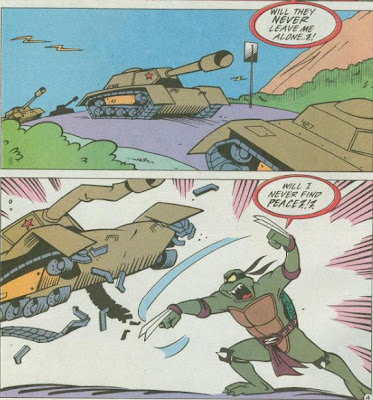 On the beach, Mondo Gecko and the other Mutanimals congratulate Wingnut on overcoming his handicap and learning limited flight on his crippled wings. Jagwar notices a newspaper on the ground, with the capture of Slash being the front page article. Jagwar mistakes Slash for one of the Ninja Turtles and the Mutanimals decide to go rescue their “friend” from jail.

Sneaking into the prison after nightfall, Mondo Gecko picks the locks to Slash’s cell with a hairpin (a skill he learned from his ex-girlfriend Candy Fine). As they carry Slash out into the wilderness, the Mutanimals gradually remark that he sure looks nastier than any of the Ninja Turtles they know. Just as they realize he isn’t a Ninja Turtles, that’s when Mondo steps on a twig and awakens the slumbering maniac. 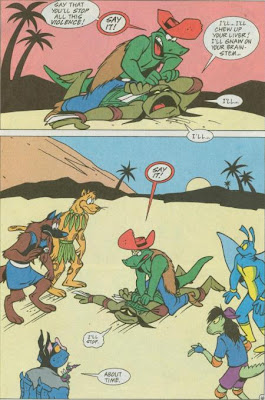 Slash goes berserk, bashing his way through all the Mutanimals and shouting insanely violent threats all the while. None of the Mutanimals can so much as scratch the lunatic until Leatherhead decides he’s finally had enough. Putting his wrestling moves to good use, Leatherhead subdues the crazy space-turtle and forces him to say uncle.

Now more docile and melancholy, Slash explains how he was sent to the toxic dump planet of Morbus for crimes against the universe. There, he met Krang and travelled to Earth in search of palm trees, where he ultimately came into conflict with the Ninja Turtles and wandered off after the battle was finished. Man Ray asks him what the big deal about palm trees is. Slash tells him that he originates from an alien world in Dimension X called Palmadise, which was full of palm trees. That is, until Vertmorte lumberjacks cleared the entire planet of them for firewood for the presidential mansion. After that, Slash swore vengeance against all authority figures, which is how he wound up imprisoned on Morbus. 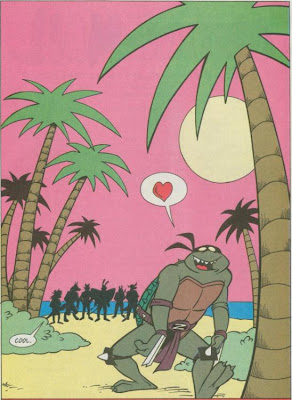 Leatherhead and Man Ray brainstorm and figure out a way to help the sobbing Slash. They take him to a tropical island that is a nature preserve where humans are forbidden. There, he can be surrounded by palm trees and never have to worry about people cutting them down. Happy at long last, Slash thanks the Mutanimals and wanders off to explore his new home.

*This story is continued from Mighty Mutanimals #8.

*The Mutanimals won't appear again as a full group until TMNT Adventures #48, during the "Megadeath" back-up serial.

*Mondo Gecko’s girlfriend, Candy Fine, previously appeared (and broke up with him) in TMNT Adventures #18. According to this issue’s letters page, they first met in a mosh pit at a Helmet concert.

The Mighty Mutanimals ongoing series is over, but at least it opted to go out on a high note. Slash is one of those characters that, for whatever reason, people just seem to love. Precisely what it is about the guy that makes him so insanely popular is hard to quantify (and a subject I want to save for a future article), but the fact remains that people love him and whenever he shows up it feels like something special (thanks in large part to Clarrain using him very sparingly in TMNT Adventures).

This final issue is a fairly inconsequential tale, but it picks up a loose plot point from TMNT Adventures and gives it a pleasant ending. If you read all of the Mighty Mutanimals ongoing in one sitting, I think you’ll find that its major setback is that it seems to exist solely to set up story arcs that are resolved in TMNT Adventures. The arc involving the Path of the Four Winds and the Horsemen of the Apocalypse all lead to a conclusion in TMNT Adventures, likewise the introduction of Armaggon and his sinister machinations will be resolved in the Mutanimals’ sister title, too. Even these final two issues center around the return of villains who previously appeared in TMNT Adventures. Mighty Mutanimals never developed its own identity and unique plot threads, simply feeding stories to the most popular title until it had nothing left for itself.

It’s certainly a shame and a problem I had with a lot of comic books during the 90s, growing up. I was a huge, huge fan of the Danny Ketch era Ghost Rider series and many of its off-shoots, but I was often infuriated with the number of major crossover event arcs that dominated the titles. It got to the point where for what felt like two years, you couldn’t pick up two consecutive issues of Ghost Rider and get a coherent story. There comes a point where bouncing readers back and forth across different titles hurts your product, and as far as Mighty Mutanimals is concerned, that’s all that book was from beginning to end.

But back on topic of this particular issue’s merits, we have Mike Kazaleh returning to art duties after a one issue break. This issue finally sees him drawing the one thing he never seemed to bother with during his run on the title: backgrounds. We finally get something to look at beside generic jungles for half the issue. It seems like such an odd thing to find noteworthy, but when the previous eight issues of this title have been nothing but dudes in a rain forest, to actually see something else for eleven pages feels almost like a treat. Kazaleh draws a great Slash, and though his layouts pale in comparison to Mitchroney’s or Allan’s, there’s still quite a bit of energy in the art as Slash rampages for 23 pages. Kazaleh’s humorous tone fits this story well and Slash actually seems cute once he’s mellowed out at the end (I love his flashback on Palmadise).

While I wouldn’t say that the Mighty Mutanimals ongoing went out with a “bang”, since that would imply a story of major narrative significance, it definitely left readers on a high note with a strong one-shot story featuring a very popular villain. For a title that was nothing but doom and gloom about the environment from start to finish, it actually ends on a somewhat upbeat message about government nature preserves, to say nothing of Slash getting such a happy ending.