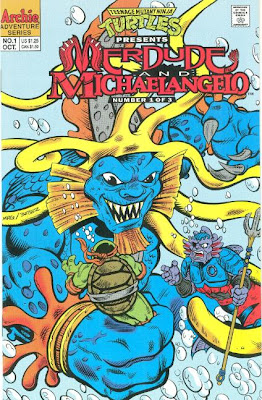 “Dawn of the Kraken”

In the distant future, a pair of space travelers (Dundor and Grundle) catch a signal coming from the forbidden planet known as Earth. Landing in a swamp, they find the signal coming from a massive satellite dish that must have taken years to build. Their ship is immediately invaded and they are overpowered by shark-man Armaggon, swearing vengeance against the Turtles.

In the present, Michaelangelo is tooling around in the Mutanimals’ new minisub when he notices Merdude in heated combat with an octopus. The “fight” turns out to be a sparring match and Merdude happily greets his friend. Merdude asks Mike to follow him and the Turtle, putting on his oxygen mask, abides. 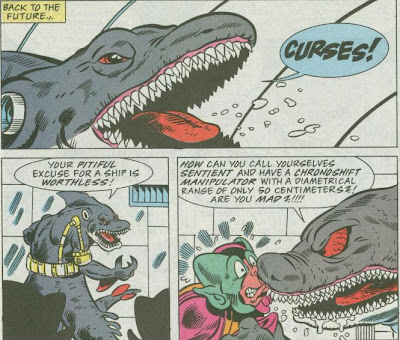 Back in the future, Dundor and Grundle have become Armaggon’s sniveling (and motor-mouthed) lackeys. Armaggon is furious that their chronoshift manipulator can only create a timeslip 50 centimeters wide. They explain that they only use their chronoshift to send small probes back in time for research purposes, so as not to disrupt the timestream. The furious Armaggon orders them to outfit one of their probes with lasers and speech capabilities and to do so without uttering a word.

In the present, Merdude leads Mike to a secret cave where dwells a beautiful plant he calls Lorian. Chewing the leaves, Mike finds he can now temporarily breath and speak underwater. Merdude explains that Lorian is an ancient plant that has cured sea creatures of the world for thousands of years, with Merdude as her most recent caretaker. Unfortunately, despite all efforts, Lorian cannot grow anywhere else on the planet and is thus limited to the one plant.

In the future, Armaggon records a message in an ancient tongue, “Arise and destroy”, on the probe and sends it back to the year 1993. He intends for the probe to burrow down beneath the sea floor and awaken the ancient, unstoppable creature called Naughtikus the Kraken, who will most assuredly destroy the Turtles. 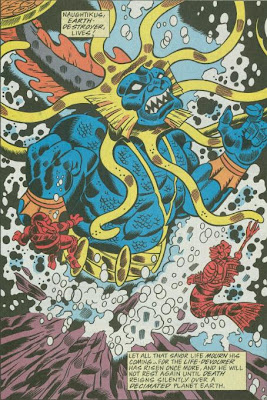 And back in the present, the probe does just that, wizzing by Merdude and Mike and using its lasers to find a cave deep beneath the ocean floor. The probe awakens Naughtikus, who immediately bursts through the ocean floor, seeking to devour all life on Earth. Mike attempts a full frontal assault on the monster, but knowing of the ancient legends, Merdude tries to warn him to stay back. Mike is too late and Naughtikus uses his powers to drain Mike of his lifeforce. Left with no alternative, Merdude reluctantly plucks Lorian from her cave and feeds her to Naughtikus; the pure healing energies of the plant sending the evil creature into a permanent coma.

Merdude then takes Mike back to the cave and scrounges for the last of Lorian’s roots. Feeding them to Mike, the Turtle is brought back from the brink of death. Though he knows Lorian would have wanted to give her life to save all of the world’s, Merdude still grieves for her passing and swims off to be alone. Mike pulls a seed out of his teeth and drops it to the sea floor before taking off after Merdude (in need of directions back to the minisub). Unseen by Mike, the seed begins to sprout. 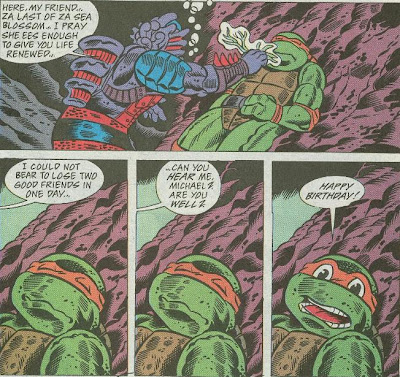 And in the future, Armaggon reviews the footage of the battle taken by the probe and is furious over the failure. Dundor and Grundle remind him that if he had destroyed the world in the past, there’d be no Earth for them to be orbiting. Realizing how much he hates time travel, Armaggon blasts off in the ship, scheming of a new way to get revenge (and telling his yammering lackeys to shut up).

*Merdude returned to the present and Armaggon was left stranded in the future in TMNT Adventures #44.

*While spin-kicking Naughtikus, Michaelangelo shouts “tatsu-maki-senpu-kyaku”. All you Street Fighter fans ought to know what that is.

*This issue also featured a bonus pinup of Naughtikus by Matt Roach and Ryan Brown.

*The indicia lists the title of this miniseries as “TMNT Presents: Merdude”; the “and (character’s name)” just being a cover gimmick.

The idea that a paper-thin character who only appeared in two issues somehow got his own spin-off miniseries didn’t exactly leave me thrilled to read the thing. But much to my surprise, the Merdude miniseries was actually quite good, and probably the best of Archie’s 3-issue character miniseries outside of the first April O’Neil one.

Acting as something of a follow-up to “The Future Shark Trilogy”, this issue brings back Armaggon for a round of revenge, wisely saddling the two-dimensional villain with a pair of comedy relief lackeys to keep his scenes interesting. Armaggon’s plot is a bit absurd; destroying the whole planet in order to gain vengeance on the Turtles seems kind of like throwing the baby out with the bathwater… he wanted to take over the Earth at one point, right? His motivations are murky, at best. The issue is also packed with lots of plot contrivances, such as the aliens that find Armaggon just happening to have a time machine on their ship or Mike and Merdude just happening to be swimming over Naughtikus’s prison. But this is comics, so really, these things happen.

One of the real strengths of the issue is that it’s a very done-in-one plot, telling its complete story within the one issue and pacing it out fairly well (Naughtikus is subdued rather quickly, but that’s really the only problem). And though Merdude’s eulogy for Lorian is pretty overlong, the environmental message of the story is nicely subdued.

Michael Gaydos’s art is quite good, if lacking in a distinct visual style that would make his work instantly recognizable. But be that as it may, his panel layouts and action sequences are very exciting and the dude draw’s the most ferocious Armaggon this side of Peter Laird’s covers for “The Future Shark Trilogy”.

Though Merdude’s expression on the cover is hilarious. “Michaelangelo, what the FUCK!? I told you NOT to let him grab you!”

The Merdude miniseries was something of a surprise, but it probably shouldn't have been, considering it was penned by Dan Berger, who generally scripts very fun TMNT stories. So even though it stars a character I really couldn’t give a damn about, the strengths of its story, dialogue and art make it a very worthwhile mini.

Grade: B (as in, “But maybe Michaelangelo should have stuck to his move set from TMNT Tournament Fighters”.) 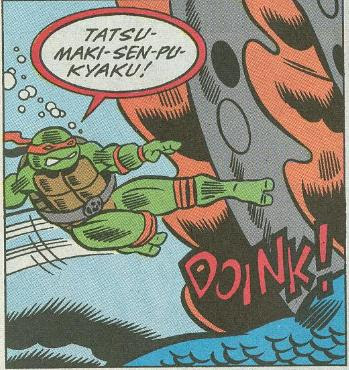