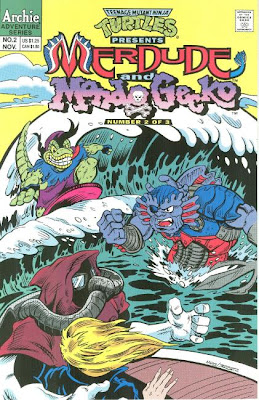 “Voyage to the Bottom of the Barrel”

On an uninhabited island, Mondo Gecko contemplates lyrics for his next metal album as future-Donatello helps the Mutanimals finish their new headquarters, disguised as an active volcano. Future-Don takes some time out to talk to Mondo, telling him that after bringing Merdude back from the future, he felt compelled to return and help the Mutanimals build their new base (mostly because he remembered visiting it as a teenager and learning so much new tech… in a bizarre time paradox). With the finishing touches put on the base, future-Don opens a timeslip and bids the Mutanimals a dramatic fairwell, making a point to cryptically tell Man Ray to “let bygones be bygones” as it might save his life some day. 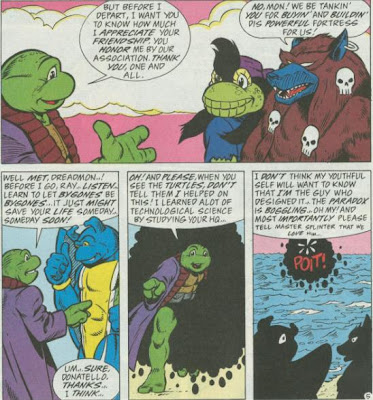 Nearby, Candy Fine is floating around on a new yacht her daddy bought her, listening to the hired band, Doom Nation, belt metal tunes in her ear. Alas, she can’t come out of her funk, as she regrets abandoning Mondo when he mutated into a gecko. Suddenly, a giant mechanical arm reaches out of the water, grabs Candy, stuffs her in a strange submersible and disappears beneath the waves. The band pauses then plays on.

Back at the island, the older Mutanimals are all getting ready for bed, but the youngster Mondo still wants to party. Merdude, having stayed to help with the construction of the HQ, asks Mondo to put on his oxygen mask and accompany him to an undersea festival celebrated by Mermaids and Glublubs. Mondo jumps at the opportunity, but as they near the festival, a Glublub warns them that a strange sub is attacking. The weird sub, operated by the mumbling Murk Mariner and his pirate crew, snatch Merdude’s Mermaid girlfriend, Eowithe. The heroes give chase, but aren’t fast enough to catch it. 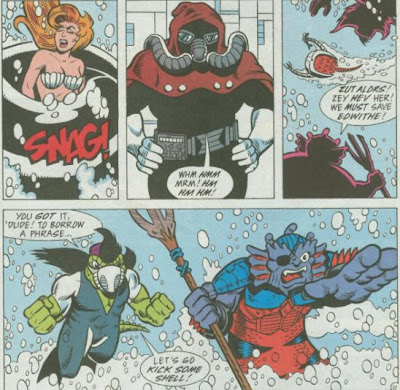 In the sub, Murk Mariner throws Eowithe into the same cell as Candy, as his pirate lackey informs the prisoners that they’re in the ransoming business and Candy’s dad should pay a fine price for her return (while Eowithe would be popular at any seedy aquarium). Candy befriends Eowithe, who is dying without water.

Elsewhere, Mondo reaches the surface to catch a breath of fresh air and notices Candy’s yacht. After a brief dialogue with the Doom Nation players, he learns that Murk Mariner has kidnapped Candy and jumps back into the water with renewed vigor.

In the sub, Candy uses her lock-picking skills to open the cell. The pirate lackey attacks with his whip, but is knocked out by a blow from Eowithe’s flipper.

And back in the water, Merdude has enlisted the aid of some hammerhead sharks and a Glublub to help them find the mysterious sub. With their help, they find the sub and begin tearing through the harpoon-wielding scuba pirates.

Inside the sub, Candy helps Eowithe to an airlock and sees her out safely. Just then, Murk Mariner shows up and strikes her across the face. Candy isn’t about to take that sort of shit and handily trashes Murk Mariner. Outside, Eowithe reunites with Merdude as Mondo infiltrates the sub. He finds Candy already tying up the unconscious Murk Mariner. 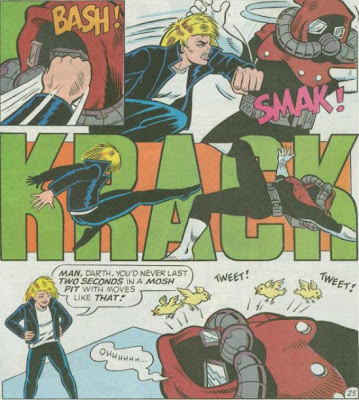 Later, Merdude takes the sub full of pirates to the authorities while Candy and Mondo dock the yacht at Mutanimal HQ. Candy tells Mondo that breaking up with him was the worst mistake of her life and asks if he’ll take her back. Of course he does.

Elsewhere, a timeslip opens and who should step out of it but Armaggon!

*This story is continued from Merdude and Michaelangelo #1. The story concludes in Merdude vs. Ray Fillet #3.

*Candy Fine broke up with Mondo in TMNT Adventures #18.

*The Mermaids are described in an editorial note as speaking ancient Atlantean. What relationship they have to the ancient Atlanteans who appeared in the Donatello and Leatherhead miniseries is unknown.

*Doom Nation, the band performing on Candy’s yacht, was an actual band. This issue ends with an advertisement encouraging readers to contact the band to get more info on them.

*This issue also contained a bonus pin-up of the Murk Mariner by Matt Roach and Ryan Brown.

Though episodic in format, it picks up on a lot of loose threads left over from that arc. Obviously, Armaggon is a returning foe in the mini, but you’ve also got the involvement of future-Don, revisiting Merdude after returning him to his place in the past. I guess now we know where the Mutanimals got that minisub Michaelangelo was playing with in the last issue.

It’s also funny to see what ideas created for the Mutanimals animated series (that never got produced) wound-up appearing ever-so-briefly in this mini. The disguised volcano island base was to appear in the cartoon as their mobile HQ, and from what info has been released by Ryan Brown and Steve Lavigne, was to have been designed by Donatello in that series, too. The actual Mighty Mutanimals ongoing series presented them as a bunch of eco-warriors hanging out in South America and just doing whatever. The Merdude miniseries seemed to be all about making them into an actual “superhero” team.

Alas, it all sort of seems for naught, as the next time we see the Mutanimals after this mini… well, it’ll be the last time we see the Mutanimals. They hardly even got to use all their cool new stuff! Still, with that in mind, it adds an extra layer of emotional depth to future-Don’s farewell to the team, as he never got to bid them goodbye at the time. It also gives a better idea of just why he’d risk mucking up the timestream by going back in time and helping them build their HQ with all sorts of future tech; he just wanted to spend some more time with them before they’re “written out of the book”, so to speak.

As for everything else in the story, well, Murk Mariner was a pretty sucky villain. His mumbling bit was funny, but the guy was basically just Captain Mossback but with a cooler design. What I really appreciated about this issue was just how well Berger shows off the cohesive universe of the TMNT Adventures series. The Glublubs make yet another return, as do the Mermaids that Merdude mentioned in his first appearance, but they're simply regarded in passing as something we're all used to by now. Characters are also shown speaking ancient Atlantean (though how they’re related to the other Atlanteans we don’t know) and there’s just an internal consistency to this universe I’m really coming to appreciate.

I also dug that Berger didn’t go the standard damsel in distress route and Candy basically saves herself and has things under control even before Mondo gets there. Berger even references her lock-picking skills, which Mondo mentioned in the Mutanimals series. And as with the last issue, Berger seems to really be having fun with Armaggon. I love that line he has at the end, “I made it! Vengeance is mine! …And I really mean it this time!” It’s ridiculous and self-aware, but not to the point of being annoying. It’s just funny.

Though it focuses on a non-Mutanimal, the Merdude miniseries is a spiritual follow-up to their cancelled ongoing and definitely something to be picked up by fans of the characters. It’s also the only time we’ll ever see some of the ideas created for the unrealized cartoon.

Grade: B+ (as in, “But Doom Nation, if this was really the best PR stunt you could pull, then you should have gotten a better agent”.)