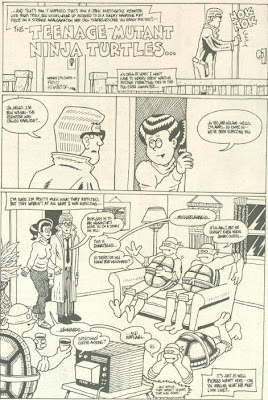 Wilson is a reporter for a major metropolitan newspaper. Actually, no, he just works for a tabloid rag called the Daily Trumpet. His boss, John Jacob Jingleson, calls him in one day to stop his article on corruption in the city council and follow a new lead: a young woman’s claim that she’s living with four teenage mutant ninja turtles. Skeptical, Wilson heads to the apartment building, figuring that the city council will still be corrupt tomorrow so why not?

He’s greeted by April, who invites him in. There, he meets Donatello, Michaelangelo, Leonardo and Raphael, all nonchalantly sitting on the couch, watching old reruns. Only marginally intrigued, Wilson flips out his notebook and jots down their origin story. 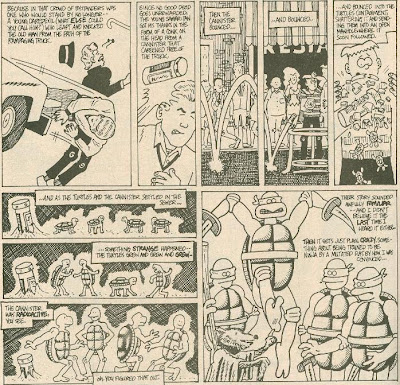 Wrapping things up, Wilson comes to the conclusion that he’s dealing with four midgets in lousy costumes and that someone has played an elaborate prank on Jingleson. Leaving, Wilson tosses his notes at a trashcan, misses, and keeps on walking.

Passing by, a familiar pair stumble upon the notebook. “Kevin and Peter” decide that it’s just what they’ve been looking for to start their new comic book! As they march away, a rat addresses the audience, letting us know why so many people think comics are trash. As an aside, he hopes the two men decide to play up the mutant rat angle a little bit more.

*This story was originally published in the third printing of TMNT (Vol. 1) #2. To date, it has never been reprinted.

*Wilson refers to the young boy who shoves the blind man to safety, taking a conk on the head from the radioactive ooze canister as “a young daredevil (what ELSE could you call him?)” Subtle. Very subtle.

I instantly recognize Hembeck’s distinctive style, though I think his contributions to Marvel Comics were a bit before my time. I’ve read a few of his strips in back issues of Marvel Age and other publications here and there, though, and he’s a cartoonist with a great sense of humor and a unique art style.

“The Teenage Mutant Ninja Turtles” isn’t exactly a gut-buster, no, but I got a few chuckles here and there, mostly when Wilson enters April’s apartment and the Turtles don’t even bother to get off the couch, greeting him with an unenthusiastic “Hi”. And even in his jovial, goggle-eyed style, Hembeck draws a better-looking April than Eastman or Laird. Really, anything is better than that helmet-haired, 80s perm monstrosity from most of the original Mirage run.

Only 5 pages long and yet it’s still a very wordy strip and might take almost as long to read it as the full feature issue! There are some friendly jabs in there at the TMNT’s history as a Daredevil parody (and their original sharing of his origin sequence), but it’s all in good fun.

Not much else to say about this one, other than the fact that it’s one of the more offbeat bonus strips in these Mirage reprints, as most of the ones that come next are just Eastman and/or Laird churning something silly out on their lunch break.

Grade: N/A (as in, “Nintendo Power’s Howard & Nester comic has my favorite design for April, in case you’re curious”.)