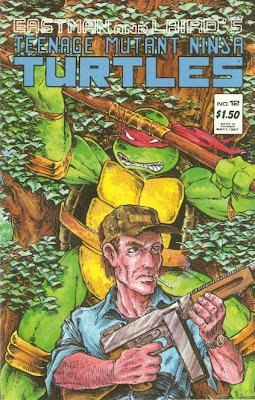 Out in the woods, the Turtles, Splinter, April and Casey are enjoying a picnic, with Splinter promising to continue Casey’s ninjutsu lessons after they eat. Suddenly, a young man comes storming through a bush, screaming for help. In the confusion, his glasses fall off, rendering him nearly blind. Casey is ready to pummel the guy for interrupting their picnic, but April intercedes, asking him what’s wrong.

Apparently, his name is Michael Murphy and he’s a student at the University of Massachusetts. He was kidnapped by a terrorist cell called the Committee to Rebuild American Patriotism. They’re a bunch of survivalists who think the Cold War’s guarantee of nuclear destruction has taken far too long; they want to live in a post-apocalyptic future now so that they can prove their survival training to the world. Thus, they forced Michael to build a nuclear bomb in the compound where he escaped from. 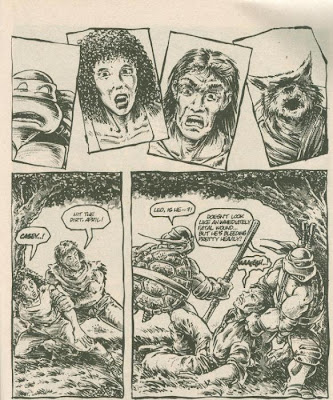 Michael is then shot by a sniper and everyone takes cover. April and Casey agree to take Michael to Cooley-Dickinson for treatment while Splinter and the Turtles deal with the survivalists. Elsewhere, the leader of C.R.A.P. (and the one with the smoking gun), Skonk, tells his troops (Chet, Pewk, Spuds and Bubba) to follow the weirdos in the costumes.

In the woods, Donatello has an easy-enough time dealing with Chet, but not so easy a time wrestling with whether he should try to disarm the nuke or clear out for safety. Naturally, he decides to go for it and heads toward the compound. Not far away, Mike encounters Pewk, who attempts to defend himself with a pair of nunchaku. This makes Mike’s day. 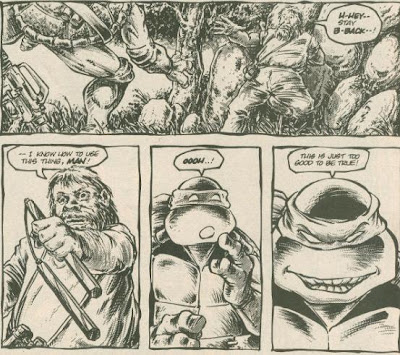 Skonk, meanwhile, has a run-in with Splinter, who handily beats him in combat. Skonk, though, blinds Splinter with dirt and makes a break for the compound (where Don has just found the bomb in a shed). Crossing a creek, Spuds and Bubba step on some turtle shell-shaped rocks which turn out to be Leo and Raph. Leo and Raph beat them senseless, meet up with Splinter and Mike and then also head for the compound.

They arrive too late, as Skonk has scaled to the roof of the shed, brandishing the remote detonator for the bomb. Splinter tries to talk him down, but Skonk insists that the only way the world will listen is with blood. Suddenly, Don comes running from behind the shed and tells his brothers to hit the deck. Skonk sets off the bomb, but the explosion only blows up the shed (and Skonk with it). 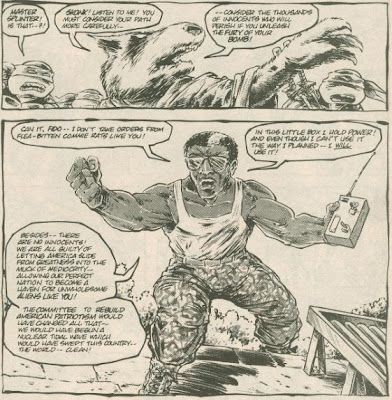 Epilogue: Back at the farm, Casey says that the doctors at Cooley-Dickinson think Michael will pull through. April and Splinter compliment Don on his fast thinking: removing the plutonium core from the bomb to render the explosion relatively harmless. Don isn’t so jovial, as he takes no joy in having killed a man, and he can almost sympathize with Skonk, as who doesn’t want to survive?

*This issue was adapted into the 4Kids TMNT episode “H.A.T.E.” The “Committee to Rebuild American Patriotism” had their name and purpose changed to “Humans against the Extraterrestrials”… for obvious reasons. Skonk had his ethnicity changed to Caucasian for the episode, too, presumably for the purposes of political correctness.

*CHET ALERT: One of the members of C.R.A.P. is named Chet. “Chet” was an Easter egg snuck into several issues of the original Mirage TMNT comic because the guys… just liked the name!

The Exile to Northampton story arc is one of those “ends justify the means” sorts of situations, where I really didn’t care for most of the issues but appreciated the purpose that they served (keeping the Turtles out of New York for a year or two). Mostly, they’re just these oneshot stories built on contrived coincidences; a plot mechanic that will dominate much of the Mirage TMNT library thanks in large part to Tales of the TMNT (Volume 2). Either that, or Northampton is much more interesting than I ever imagined.

“Survivalists” is Laird’s first solo story (with Lavigne on letters, naturally) and he describes the new rotating dynamic in the “Turtle Tracks” editorial. Of course, the on-off Eastman-Laird dynamic, described as the new status quo, would only last a handful of issues before both men walked away from the title to handle the corporate side of their new media empire, farming the comic out to staffers. As his first full solo story, Laird excels in certain areas and stumbles in others.

Story-wise, this is ostensibly a focus on Laird’s favorite Turtle, Donatello, who ultimately saves the day. It’s funny to see how far Don has developed since the beginning of the series. Remember the outer space arc where Don was gutting people with the broken end of his staff and stabbing enemies with knives, completely unconcerned with taking a life? Here, he’s quite a different character; disappointed that his actions inadvertently caused even a blood-thirsty maniac like Skonk to bite the dust. The rest of the issue consists mostly of just decompressed fight sequences as the Turtles take out the members of C.R.A.P., and as with issues like Tales of the TMNT (Vol. 1) #1, the enemies are so far beneath the skills of the TMNT that there’s little suspense to the drawn-out action.

I also want to mention a scene that stood out to me on my first read-through of the issue and one that acts as a sore thumb every time I pick up this comic: the scene where Michael comes screaming for help and Casey responds by attempting to beat him senseless for annoying him. When Casey was introduced, it was as a vigilante hero trying to help “the little guy” from bullies and thugs. Here, he’s the bully, menacing someone clearly in need of desperate help. That is not how Casey Jones would act and I hate the scene for its blatant mischaracterization. Laird spends the issue refining his favorite character whilst botching one of Eastman’s.

As mentioned a long time ago, Laird doesn’t draw a very attractive-looking April (you could usually tell when Eastman was drawing her in the collaborative stories, as his was less wrinkle-faced). Here, she looks positively hideous and Casey looks to have taken some blows from the ugly stick, too. They’re written out of the plot very early, so you don’t have to spend a lot of time looking at them, but man. Yuck.

Also, I don't know much about guns, but can you put a scope on an assault rifle and use it as a sniper rifle? Cuz Skonk does.

Criticisms aside, I think Laird deserves cred for something very impressive: The man draws nature like nobody’s business. The landscape of the forest is gorgeous and rich with minute details in the trees and other flora. I absolutely love page 14, which consists of only two tall panels that show the Turtles hiding out in the creeks and cliffs. 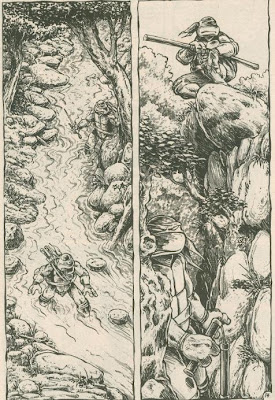 There’s also three luxurious two-page spreads to take in with this issue. The first one isn’t so hot because of the grotesque April and Casey bookending the sides, but the spread where Skonk encounters Splinter and Leo, and the one where Raph takes the survivalists in the creek are positively beautiful. You’ve also got several splash pages; the opener with Raph targeting his bow is an immediate visual hook, while the splash of Skonk and his cronies makes the survivalists look more threatening than they have any right to be.

“Survivalists” is a great display of Laird’s unparalleled skill at drawing nature and landscapes, as well as some stupendous spreads. Unfortunately, it’s also a display of his inability to draw people without a thousand wrinkles and definition lines cluttering their countenances. The story is badly lacking in tension and the 4Kids series had to jump through a lot of hoops and add a lot of padding to try and make it fill a half hour cartoon (and they still couldn't make it work). But be that as it may, once April and Casey exit the scene, it is a very pretty issue to look at.

Grade: C- (as in, “Come to think of it, though, I guess it was kind of weird to have a black guy leading a bunch of inbred hillbilly stereotypes”.)