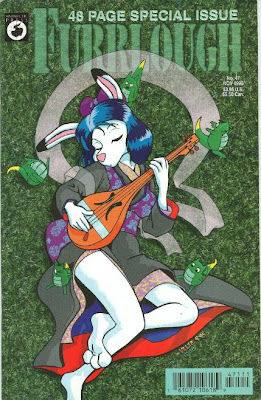 In the post apocalyptic ruins of a city, a shrouded figure wanders the rubble with her infant daughter in a carriage. She considers that there was a time when all she wanted was to be alone; wanted it so much that she wished all of mankind would disappear. Later, she learned the value of companionship. And from one of her companions, she bore a child. Now, they are all gone and she wishes she had more. 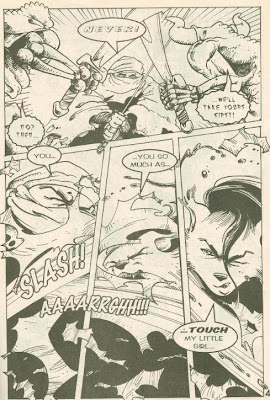 Suddenly, a bright light appears and skeletal, demonic creatures stand before her. The monsters demand the woman’s daughter. The mother unsheathes her sword and a fight breaks out. In the fight, the monsters tear off her bandages, exposing her as Ninjara. Grabbing the baby, the monsters taunt Ninjara that the little girl will be joining her father in Hell. The monsters disappear with the baby as Ninjara screams and cries in futile horror. 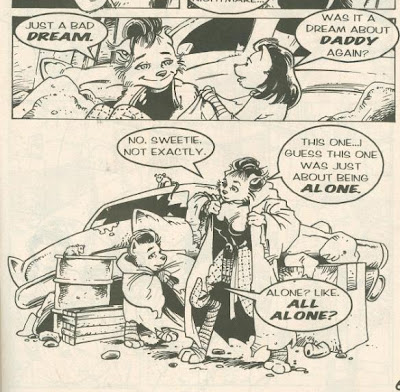 Ninjara wakes up from her bad dream to find her elementary school-aged daughter at her side. Her daughter asks her if she had another dream about their father. Ninjara tells her that it was merely a dream about being alone. Leaving the junked car they spent the night in and donning their shrouds, the two walk stealthily into a futuristic city populated by humans.

*This story takes place after Year of the Turtle #3 but prior to the future first explored in TMNT Adventures #42.

*For legal reasons, no mention could be made of the Ninja Turtles in this story. An advertisement published in Furrlough #45 and #46, however, features the character stating, “I’m not hanging with teenagers anymore!” Incidentally, that ad mistakenly used Steve Murphy’s real name rather than his pseudonym, “Dean Clarrain”.

I think a piece of me died, paying money for a furry stroke mag. This eBay transaction is probably logged into my FBI record or something. Oh, the things I do for the Ninja Turtles…

Anyway, I’ve talked about how Ninjara is not one of my favorite characters. As a matter of fact, I used to straight up detest her. My opinion has mellowed over time and I’ve found her to be a decent supporting cast member. One thing I actually liked about this 7 page short was her monologue at the beginning, where she reflects on her behavior in her very first appearance as a villain (where she tried to exterminate all humanity). In the past, I mentioned that her transition from “genocidal maniac” to “good guy” was really rushed and sloppy and her previous deeds were never again addressed in TMNT Adventures. Well, brief though it was, she DOES address them in this issue. So that’s cool and all.

But yeah, this is a furry stroke mag. It is NOT crafted to be in the same tone as TMNT Adventures. “Fuck” is used freely by the title character and, yes, Ninjara gets her shirt torn off, exposing her breasts for all the furries of the world to see.  That sort of stuff.

Whether you're down or not with the fetish, I thought the gratuitous swearing and nudity proved detrimental to what is otherwise a decent solo story following a supporting character from TMNT Adventures. The swearing seems to have been included as a means of proving “we aren’t a KIDS comic, anymore!” while the nudity seemed to only have been included so the comic could fit in with the other raunchy tales published in Furrlough.