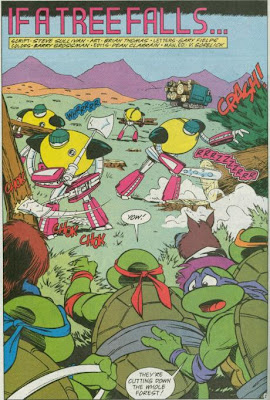 In a national forest somewhere in the pacific northwest, the Turtles, Splinter and April wake up to a beautiful new morning. Their camping trip is going well until they notice a horde of robots clear-cutting the forest. Contrary to Splinter’s orders to observe the situation and not act rashly, the Turtles leap into action, destroying the robots. They are quickly approached by Sheldon Slujj, a billionaire philanthropist and owner of the Slujj-bots. Along with him are his young daughter, Emelia, and his assistant, Percy Brice.

Slujj explains that he owns the land next to the national forest (where they’re trespassing) and even has a permit from the government to develop the area. He plans on building a toxic waste storage facility that concentrates the waste so it takes up less space before burying it in an uninhabited environment. April apologizes for the Turtles’ rash actions and offers to help make amends. Slujj takes them back to his construction site and employs the Turtles as guards, hoping they’ll catch a saboteur that’s been making trouble for his crew. 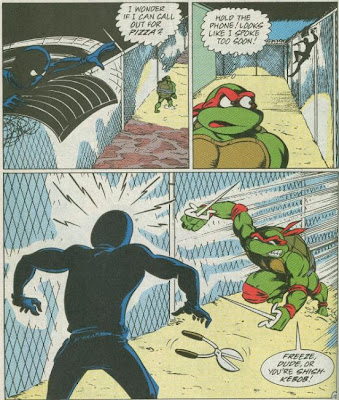 That night, the Turtles split up and patrol the site. Raph immediately catches the saboteur, whom April and Splinter recognize as Victor Fosse, a famous environmentalist who went missing in the pacific northwest a year ago. Fosse explains that by concentrating the toxic waste for disposal, Slujj has only succeeded in making it deadlier. Even worse, he has been storing it in a ravine until the disposal site could be completed and his clumsy robots have broken several of the waste containers. The Turtles aren’t sure why they should believe him, but Fosse has convincing evidence: A Sasquatch! 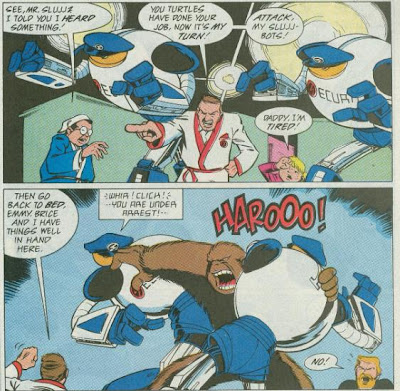 Apparently, a year ago, Fosse was hiking in these mountains when he broke his leg and nearly died. A tribe of Sasquatch found him nursed him back to health and he has been living amongst them ever since. Slujj’s toxic waste has been poisoning the Sasquatch and his clear-cutting has been destroying certain herbs they need to survive. Suddenly, Slujj shows up with his Slujj-bots and they seize Fosse. A fight breaks out, as the Turtles fight the Slujj-bots and the Sasquatch fights everybody. In the chaos, Emelia wanders away into the poisoned ravine and collapses. 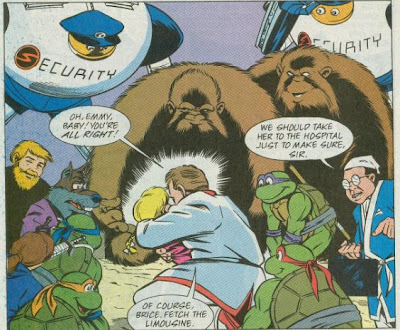 With the fighting defused, April convinces Slujj and Fosse to talk it out. Slujj claims that his canisters in the ravine are perfectly safe, but when he goes to prove it to Fosse, he finds Emelia clinging to life. Emelia has only moments left to live, so Fosse sends for more Sasquatch, who return with the herbs necessary to counter the toxic poisoning. Emelia survives and Slujj vows to spend money building a facility that breaks down toxic waste into chemical components, rather than hide it underground. With the promise that he’ll also end his clear-cutting, the Sasquatch wander back into the woods.

*Chronologically, I would place this story after TMNT Adventures #26. The story continues in “The Last Sea Serpent”.

*Slujjco will appear in a flashback in TMNT Adventures #71.

Once, just ONCE I would LOVE to read a TMNT Adventures story where one of the wealthy industrialists is actually disposing of toxic waste, or cutting down trees, or developing land, or whatever RESPONSIBLY and honestly. But much like the universe of “Captain Planet”, those sorts of people simply do not exist. Every billionaire in TMNT Adventures with a business plan that affects the environment is either flat out villainous (“Mwa ha ha! I won’t rest until I have destroyed EVERY tree! Mwa ha haa!”) or misguided and concerned only about the bottom line (“Plant saplings to replace the trees we’ve cut down? Do you have any idea how much saplings COST!?”).

This is every environmentally-themed TMNT Adventures story ever written. Every. Single. One.

It is patently dishonest and antagonistic, creating this alternate reality where every person in charge of overseeing environmental development is either fundamentally incompetent or a flat-out super villain. And of course it takes life-threatening raids from an eco-terrorist to teach these criminal masterminds the error of their ways.

Look, I don’t support deforestation or dumping of trash into the ocean or any of that sort of stuff. But the very idea that businessmen whose income relies on maintaining renewable resources, would clear-cut whole forests and not plant saplings to RENEW that resource… is just the worst level of strawman bullshit. I am certain that there are unscrupulous corporate head honchos out there, dumping radioactive waste underneath puppy orphanages, but TMNT Adventures presents a world where EVERY person in charge is a Mr. Burns or a Hoggus Greedly or a Lex Luthor, never being fair-enough to offer a counterpoint or so much as a glimpse at individuals trying to do things right. Everyone who isn’t Steve Murphy or Steve Sullivan is a greedy asshole out to destroy the planet because, I dunno, money or something.

Then there’s the bit about the Sasquatch having a natural remedy for radiation poisoning. So what you’re telling me is that a cure for cancer was growing there the whole time? Famed environmentalist and protagonist of our story, Victor Fosse, knew of an herb that could instantaneously cure all forms of radiation sickness just be eating it off the stem… and spent a year hanging with Bigfoot and raiding construction sites rather than share this with humanity? What a swell guy! Also factor in the fact that his main gripe was the toxic waste sitting in the ravine, waiting for the storage tunnels to be built to house it. But by impeding the progress of the site’s construction with his sabotage tactics, all he was doing was prolonging the amount of time the waste would be sitting exposed in that ravine!

And jeez, does Steve Sullivan even know how the government disposes of toxic waste? They encase that shit in concrete then bury it in salt mines in the middle of unpopulated wastelands, keeping the area fenced off and guarded indefinitely and, get THIS, they even include signs written in dozens of languages warning of the toxic material stored on location, SO THAT JUST IN CASE CIVILIZATION COLLAPSES, generations thousands of years from now will know to keep away.

Yeah, that was a run-on sentence, but it was worth it.

These stories by Murphy (under the pseudonym Dean Clarrain) and Sullivan are all about educating kids on environmental matters, but it’s not education when you only present half of the story. It’s a biased man-handling of the facts, warping reality until it fits your agenda. So instead of teaching kids how toxic waste is actually disposed of by strictly regulated government operations, they create a fantasy world where greedy billionaires stuff it under forests just to save money and then present that as educational material. It’s dishonest, shameful and completely transparent.

There are plenty, PLENTY of genuine environmental failings in human history for these writers to use as solid examples and plenty of environmental successes in human history to use as a source of hope. Rather than resort to such honesty, we get shit like this, resulting in a generation that whole-heartedly believes the government is clear-cutting forests full of cancer-remedies and driving bigfoot to extinction just to save a couple of bucks. Because the Ninja Turtles and the Planeteers told them so when they were seven, which means it must be true.