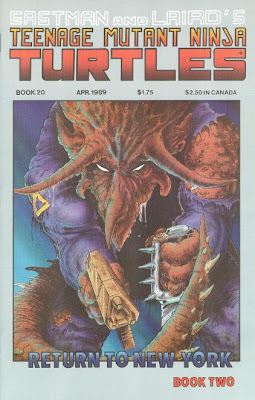 Down in the sewers, the Triceraton Commando Zog leads “Commander Zoraph” and his three fellow “grunts” to a specific location. Zog seems delusional and can barely breath; Don deduces that Earth’s oxygen blend is deteriorating his mind. Zog leads them to a sewer tunnel and smashes through the floor, right into a Foot Clan control center. The Turtles and Zog waste the Foot Soldiers within and Don gets to work cracking their computers. He finds the schematics for the primary Foot stronghold called the Hudson Block and begins setting up alarm systems to divert the majority of the Foot’s forces away from their underground entry point. 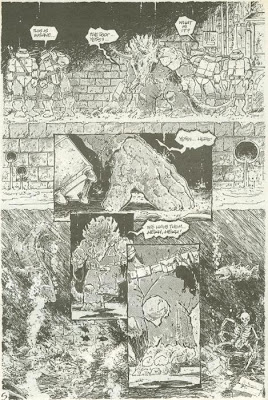 Beneath the United Savings Bank, Zog uses his Triceraton blaster (under Commander Zoraph’s instruction) to slice a hole into a bank vault without tripping the security system. Zog then slices another hole into the Hudson Block sub-basement, where Foot Soldiers are stacking crates. The Turtles and Zog take down the ninja and proceed to the next room. 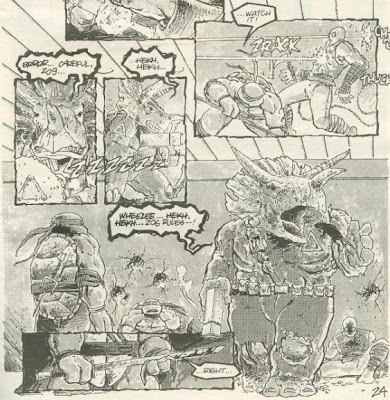 Unfortunately, Don got his directions mixed up and they accidentally waltz into a Foot training dojo. Not allowing any of the Foot to escape, they slay all the badguys within (and narrowly avoid getting mowed down by Zog’s stray blaster fire).

Entering a cargo loading zone, the Turtles and Zog seize a vehicle and proceed down a tunnel where their luck finally runs out. The alarm trips and they realize that the Foot are onto them. Arriving at the end of the tunnel, they crash the truck into the unit of Foot Soldiers waiting for them and begin an all-out brawl. Zog has now almost completely lost his mind and begins taking bullets without care. Plowing through Foot Soldiers with his horns, the wounds start to take their toll on the Triceraton. Zog stumbles the next corridor in a single-minded devotion to achieve his objective, only to be shredded by three mysterious assailants. 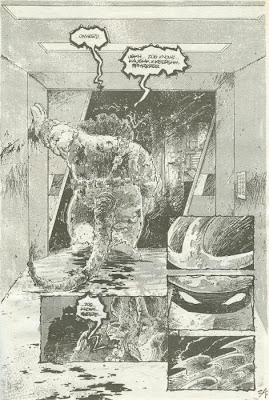 The Turtles finish the last of the Foot Soldiers and head to the next corridor. They find Zog’s corpse, but before they can reflect on the death of their comrade, they’re met by his murderers: three freakish mutant clones of the Shredder.

I’m going to have to agree with 4Kids Michelangelo’s assessment of this portion of the story; it really is like a video game. The Turtles and Zog travel through narrow corridors from one room to the next in the villain’s fortress and they cannot advance to the next stage until they kill all the generic Foot Soldiers within. And once they get to the end of the level, they have to face the boss: the three Shredder Clones.

Konami could have made a kickass arcade beat-em-up out of this.

TMNT #20 is another prime showcase of how ruthless the Mirage Turtles are, at least when it comes to matters concerning the Foot. They don’t dick around. Donatello of all Turtles prevents the fleeing Foot Soldiers in the training dojo from escaping, citing “No one leaves”, then proceeds to contribute toward killing absolutely everyone. People comment that moments like this are simply juvenile, “look at how gritty and badass our comics are” sort of dealies, but I disagree. If you read the big picture (the whole series and not just select issues), you’ll find that the Turtles don’t kill absolutely everyone and everything, but deliver the death penalty a bit more judiciously. They’re not going to stab a purse-snatcher to death, but a trained assassin working for a global crime syndicate that nearly killed their closest friends and family? Yeah, those assholes made their choice and they can deal with the consequences.

And at any rate, it’s not like they could just let a Foot Soldier run away, either. All they’d do is set off an alarm and ruin their plan. It’s a tough decision, but they’ve got to do what they’ve got to do. The Turtles were trained from childhood as assassins, after all, and they’ve been killing since at least age 12.

The next order of business is Zog; who is something of a “hi then die” character. His presence is certainly very convenient; from Raph happening to stumble upon him, to Zog happening to mistake Raph for his commanding officer, to Zog happening to know where the Foot Soldier control center was located. In this regard, I actually do appreciate Tales of the TMNT (Vol. 2) #70 as a necessary supplement to make his presence seem so much less contrived. And even though he only stars in a single issue, he pretty much steals the whole show. His wheezing and babbling gives him a frightening and simultaneously pitiable personality and his all-out attack at the end of the issue is amazing. Got to give cred to Steve Lavigne, as he did an excellent job on the lettering and shape of Zog's speech bubbles.

Peter Laird provides the layouts for this issue, directing Jim Lawson’s pencils. “Return to New York”, alongside Tales of the TMNT (Vol. 1), is the apex of Jim Lawson’s art style (he rapidly begins deteriorating as early as his next arc in TMNT Vol. 1) and he really turns in one of the most brutally beautiful issues of the series. As it happens, my favorite page of the whole issue is page 5; both in terms of layout and Lawson’s finished pencils. It’s a splash page with the Turtles and Zog at the top with descending layers of the sewer beneath, culminating in the bottom of the drain water, where an alligator, a skeleton and other interesting tidbits lay. But between the top and the bottom are layered panels of Zog finding and stomping on the weak-point above the Foot control center.

“Return to New York” is a storyline that excels at “building steam”. Each issue is more exciting and eventful than the last, while each has its own unique fingerprint making it memorable on its own. The best is still yet to come, though.