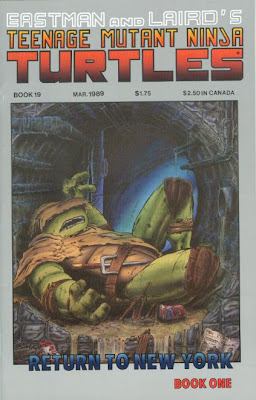 “Return to New York, Book One”

Raph is asleep in a damp pile of trash in a sewer tunnel, dreaming of the events which occurred four days ago… 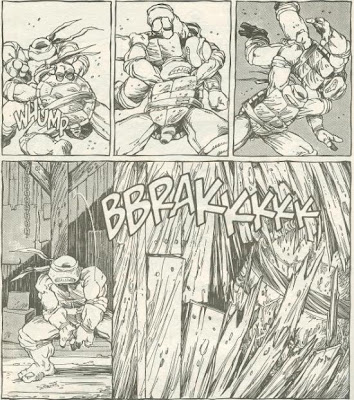 At the farm in Northampton, Raph finally decides he’s had enough of hiding. It’s been too long since the Shredder defeated them and he wants redemption. Don and Mike try not to get in his way, but Leo isn’t so intimidated, refusing to let Raph go. Raph tells Leo he’s lost his spine and the two throw down. After a lengthy brawl, Raph beats Leo and proceeds on his way to New York City alone.

Back to the present, Raph is woken by the sound of several Foot Soldiers prowling the sewers. Raph follows, only to be led into an ambush. Raph slays the Foot Soldiers, but more are heading his way. After a second battle, Raph hears a strange noise coming from one of the tunnels. Thinking it to be more Foot ninja, he follows the sound. 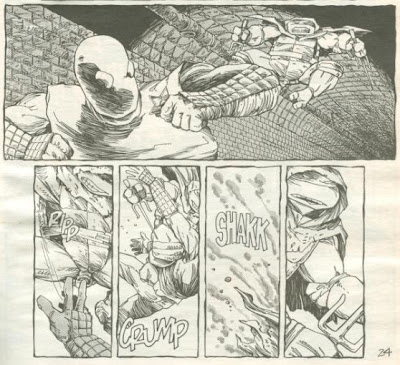 Leo, Don and Mike have arrived in New York, sneaking into the sewers in the dead of night. They make their way to their old lair and find a surprise waiting for them inside: Raphael. 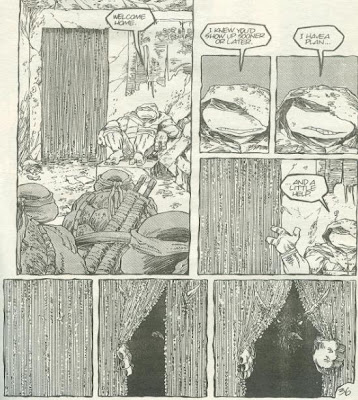 Raph greets his brothers, knowing that they’d show up sooner or later. He has one last surprise in store for them: a Triceraton Commando.

*The Shredder exiled the Turtles to Northampton in TMNT (Vol. 1) #10.

*Zog the Triceraton was left stranded on Earth in TMNT (Vol. 1) #7.

*The Turtles originally left their sewer lair to live with April in TMNT (Vol. 1) #3.

I’m just going to go ahead and suck any suspense out of my reviews right now and let you know that “Return to New York” is a straight-A storyline. Every issue is practically perfect and I never, ever tire of reading them. This was a hugely important story in the narrative of the TMNT series, being the culmination of everything the Mirage guys had been building toward for nearly two years. It is epic, it is awesome and it must be read.

That being said, this first installment is probably my “least” favorite of the three issues, but that’s not really an admonishment since I still think it is superb. TMNT #19 is built off the entire “Exile to Northampton” arc that had been running for about two years and makes you appreciate that narrative break even more. The Northampton era was nothing but a series of meaningless one-off adventures that, while perfectly interesting stories in their own right, amounted to nothing more than the Turtles spinning their wheels and accomplishing nothing. So when Raph finally cracks at the beginning of this issue and lambastes Leo and his brothers for taking it easy for so long, doing positively nothing, you connect with him instantaneously because you feel just the way he does.

I suppose if there’s any problem with that sequence, it could be that Raph was never shown being anxious to go home at any point in the Northampton stories; he's shown engaging in all the wacky adventures with same enthusiasm as his brothers. So while the story pacing worked out perfectly, one could say that the character pacing could have used a better build-up.

Kevin Eastman’s layouts and Jim Lawson’s pencils are like peanut butter and chocolate; they were made for each other. The entire flashback sequence is just amazing. There’s so much tension as Raph spills his guts to Don and Mike, finally letting out what he’s come to think of Leo, followed by a loud slamming sound and then that splash page of Leo, entering the barn, half-cloaked in shadow, saying “What?!!” Some incredible dramatic staging right there.

The fight is eight solid pages and though it reads quickly as its mostly just trading blows, it’s a fight that needed to be decompressed for its sheer narrative value. Like Wolverine fighting Cyclops, it’s a showdown the writers had been building toward and you do not shortchange the audience on something like that. The fact that Raph wins has a deeper point to it, too. It isn’t because he’s the badass fan-favorite Turtle and Leo is the milquetoast dullard; it’s because Raph is absolutely right and he just wants it more. They have been cooling their heels too long, Leo has lost his edge and they do need to go home and settle the score.

The only thing missing, in my opinion, was any sort of consultation with Splinter. Not only is he their father and sensei, but it was his blood feud with the Shredder that started the whole story in the first place. Splinter was featured in very few issues from the Northampton era and we didn’t get to see enough of his reaction to his mortal enemy coming back from the grave.

Raph’s fight against the Foot Soldiers in the sewer takes up the remainder of the issue and, yes, it is very much just a decompressed action sequence that goes on and on until the book is finished. But again, it’s important to the story. It shows that even after all this time, the Shredder hasn’t forgotten about the Turtles and still deploys his Foot Soldiers to patrol the sewers for them, just to make sure they don’t show their faces again. It also illustrates the odds Raph is up against now that he’s elected to return to New York solo, and that while the Foot Soldiers are cannon fodder, there’s more than enough of them to overwhelm a single Turtle.

As for Zog, well, didn’t see that one coming.

Mirage’s first volume of TMNT is a very oddly paced book, yet brilliant for being so. If you remove all the non-canon “guest” stories and pare it down to what counts, you do get a solid ongoing storyline that tells a very focused and fascinating adventure. But how it tends to go is that there’ll be a major event, then several good one-off stories, then a major event, and so on until everything comes to an epic head in “City at War”. There’s a great bit of variety, as the series offers both an overarching story with massive payoff as well as a selection of satisfying oneshot situations in-between. Most of the big “events”, though, center around the Turtles’ major altercations with the Foot Clan (TMNT #1, “What Goes around Comes Around”/"Silent Partner", “Return to New York” and “City at War”), so when the Turtles throw down with the Foot, you KNOW it’s something epic.

In my opinion, “Return to New York” is the best of their major Volume 1 Foot-centered storylines, narrowly edging out the previous two-parter that saw them exiled. It may not be as cerebral and socially aware as “City at War”, but it’s packaged in a far more palatable length and it’s just too damn cool.

Grade: A (as in, “And I’ll admit that the very first time I read this issue, I thought that was the Rat King rising from the pool on page 31”.)
Posted by TMNT Entity at 12:47 PM