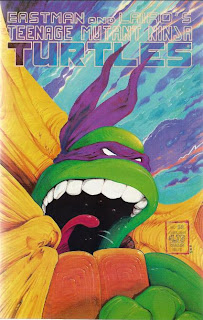 The Turtles are busy ransacking April’s apartment.  It turns out that along with an invoice from Bill’s TV Repair Service, she also received a bomb threat.  After turning the place upside down, Raph decides to take a TV break.  As soon as he hits the remote, though, a missile comes flying out of the TV set and into their faces.

In the future year of 1995, the little girl returns from her trip to the past in her time machine.  She’s greeted by a large blob-like creature and immediately tries to flee.  The creature freezes her with his Zaz Gun and says that he came for her help.  He says that he is George, ambassador of the Skwal aliens.  The little girl, now knowing her own name as history changes thanks to her time travelling escapades, introduces herself as Dale Evans McGillicutty.  George tells Dale that the Skwal are a race of monitor aliens who try to keep less advanced creatures from destroying themselves.  However, Earth came to their attention too late and they’ve no way of preventing mankind from destroying itself with pollution and war.  George says that there are still a few hours before the timeline resets and Dale’s time machine vanishes.  He asks that she go back in time 2 million years and make life more comfortable for the first homo habilis, that way mankind will never have to invent violence.  Dale loads up the time machine with provisions and disappears. 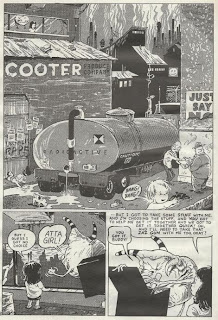 In the present, Raphael wakes up in the sewer lair; the missile heading his way being his last memory.  He finds that not only has he been turned into a makeshift robot, but so have all his brothers.  Splinter tells them that he had to put their brains in robot bodies because their turtle bodies were too damaged by the explosion.  Splinter promises to fix their bodies and return them to normal, but they have to be patient.

While Splinter does that, the robo-Turtles decide to confront the mad bomber.  They head over to Bill’s TV Repair and ask Bill what he knows about April O’Neil.  Bill mumbles that he asked April out when she brought over her TV to be fixed, but she rejected him.  He planted a bomb in her set as revenge.  The Turtles move to take him down, but Bill unleashes a giant robot TV set to destroy them.  Leo, Mike and Don are smashed by the giant TV, but Raph manages to wrestle the remote away from Bill.  He orders the giant TV to sit, but unfortunately it elects to sit on both Raph and Bill. 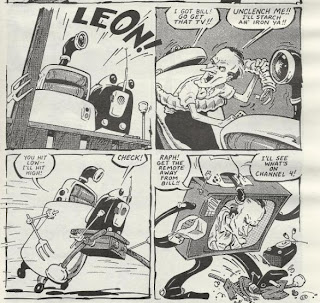 2 million years in the past, Dale arrives and approaches the first homo habilis.  She uses George’s zaz gun to pacify the ape-man and then introduces him to numerous creature comforts, like gardening and recliners and cute little puppies.  The homo habilis makes himself comfortable and Dale returns to the future.

Upon arriving in 1995, George greets her with the news that the timeline is resetting itself exactly as planned; dictators are turning into poets, pro wrestlers are turning into botanists and so on.  George exclaims that in a little while, all weapons and notions of violence will cease to exist on Earth… making the planet ripe for Skwal conquest.  Realizing she’s been duped, Dale faints. 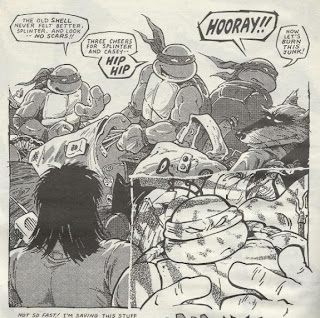 In the present, Splinter and Casey carry the robo-Turtles back to April’s apartment and reinstall their brains in their repaired Turtle bodies.  Not only that, but April now has a brand new big screen TV (the giant robot).  Suddenly, the timeline begins to reset; the Ninja Turtles become regular turtles, Splinter becomes a normal rat and both April and Casey have no memory of ever being friends with mutants.

*According to an ad in the back of this issue for TMNT #23, this 3-part arc by Mark Martin was called “The Time and Time Again” trilogy.  The individual titles come from the official Ninja Turtles and Mirage websites.

I had a lot of good things to say about Mark Martin’s first TMNT guest issue, TMNT #16, and many of those compliments carry over into this sequel issue.  The variety of styles he employs in his art is really impressive, going from a detailed action-oriented style to a simplified cartoonish style to a photo-traced hyper realistic style... sometimes between pages and sometimes all on the same page.  The way he toggles between different sorts of layouts is amazing, too.  There’ll be typical comic style blocks of varying sizes, then more comic strip-like stacks of 3-panel strips, then elaborate splash pages and two-page spreads, all utilizing a number of different visual techniques.  Martin is really quite skilled at his craft and despite any failings, this is a great comic to look at (and learn from, if you’re an aspiring artist).

What brings this issue down is that it carries on the story of TMNT #16 when there really wasn’t anything left to tell.  TMNT #16 was a great standalone one-shot that told a full circle story and was very clever in its method.  This issue comes across as going back to the well after its run dry and the story just isn’t there.  To try and mask this, Martin spreads on a thick layer of surreal, wacky comedy and I’m sorry, but none of it is funny.  Splinter suddenly being able to build robot bodies out of washing machines and repair flesh body parts, a guy putting missiles in TVs and unleashing giant robots on the city… This is the kind of stream-of-consciousness nonsense I’d expect from Hedden and McWeeney.  It’s a major tonal shift from Martin’s first guest issue, too.  TMNT #16 may not have been entirely serious, but it wasn’t a zany string of goofy weirdness like in this issue.

What TMNT #22 does share in common with TMNT #16 is the fact that Martin’s first priority was to tell Dale’s story and the Turtles are just sort of included as an afterthought.  Dale’s storyline is the most fully realized and the only part of the issue that matters.  Everything the Turtles do in this story is just filler so that they can be included in the issue.  In fact, most of the loony bullshit is exclusive to their half of the issue, while Dale’s half operates on its own internal logic and never feels like it’s making crap up just to fill 36 pages.  Again, as with my review of TMNT #16, I feel that Martin had a fully realized plot in his head about a time travelling little girl and he only shoehorned the Turtles in so that he could get the story published.

I think Mark Martin is a very talented and clever artist, which is really why it disappoints me that he elected to make this story a sequel rather than try something totally new.  Visually, it’s superb, but it suffers from trying to continue a plot that didn’t need to go on.

Grade: C- (as in, “Cartoony art laid over washed-out photograph backgrounds reminds me of Ralph Bakshi’s flicks from the ‘70s, which is a good thing”.)