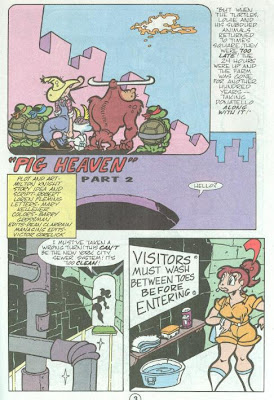 Two weeks have passed since Louie’s pasture appeared in Times Square and vanished. After finishing her report on the event, April heads down to the sewer lair to see how the Turtles have been weathering their guest: Louie Columbus. “Not well” is the answer, as Louie’s cleaning fetish has destroyed their lives (and their stock of leftover pizza). Splinter’s pretty sick of the guy, too, and after some meditation, concludes that the only way to get Louie, Kid Cortex and Oxymoron back to their interdimensional pasture (and get Donatello home) is with the aid of Cudley the Cowlick. 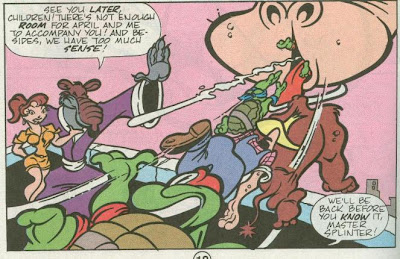 Heading to a rooftop, Michaelangelo summons Cudley, who happily offers to give them a lift to the pasture in exchange for all the hay he can eat. Leaving Splinter and April behind, the mutants and Louie jump in Cudley’s mouth and travel to the floating pasture.

There, they find Donatello and all the farm animals hypnotized and rolling around in filth. The cause of this mess is a gargantuan mutant pig named Sooey Generis. Apparently, while in Manhattan, the formerly cute and kind Sooey got a taste of mutagen-tainted sewage and mutated into the monster he is, now. Sooey wants every animal in the pasture to love filth as much as he does and will destroy any dissenters. 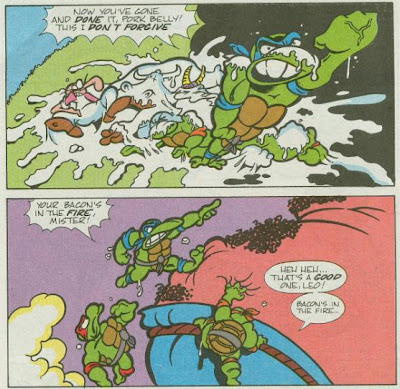 Sooey orders his hypnotized minions, including Donatello, to flatten the Turtles. The TMNT put up the best fight they can, but they don’t want to hurt the innocent creatures. In the brawl, Kid Cortex gets batted into a storage shed, where he finds a keg of TNT. Antagonizing Sooey, Kid leaps inside the keg and allows himself to be swallowed whole. Once in the stomach, Kid rams the keg, detonating it and destroying Sooey.

“Destroy” might not be the word, as the explosion actually turns Sooey into hundreds of copies of his original, tiny and harmless self. Kid survives and after being reunited with Oxymoron, they join Louie in rebuilding the farm. With the spell on Donatello and all the other animals broken, the Turtles travel back to Earth via Cudley’s mouth. Cudley, meanwhile, shouts the favorite catchphrase of cows everywhere: “Turtlebunga!”

*This story is continued from “Louie’s Pasture, Part 1”. The story continues in "Cleaver's Critters".

*April refers to the Turtles in her broadcast as though they were public knowledge. This will clash with TMNT Adventures #47, where the Turtles are shown to be unknown to the world at large.

Milton Knight’s first TMNT Adventures story comes to a conclusion, though I found the first half more interesting than the second. It would appear that the two stories weren’t originally intended to be published in the same TMNT Adventures Special, either, as “Pig Heaven” opens with an extended summary of “Louie’s Pasture”… a story readers had just seen a page ago.

Knight’s manic sense of action and outrageous expressions and poses are all on display here once again, though the setting of a farm leaves the scenery with less character than New York City had. I actually found the most entertaining part of the story to be the first act, showcasing Louie pestering all the Turtles in the lair with his clean freak habits.

It’s hard to believe that “Pig Heaven” is a full 30 pages, too, as it zips by so incredibly fast. The real attraction is the flamboyant energy of the artwork; so it’s more about stopping and savoring the insane style.

Not everyone likes Milton Knight’s work, but I enjoy it in small doses. And in the grand scheme of TMNT Adventures, I’ll gladly take stories like this over the Green Peace dreck that tends to dominate the comic. These sorts of wacked-out adventures are fun because they come at regular intervals, punctuating longer action-oriented storylines. They’re just a very lighthearted break, which I appreciate.

Grade: B- (as in, “But I wonder if Knight ever worked for Spumco. He seems like he comes from John K’s school of art”.)