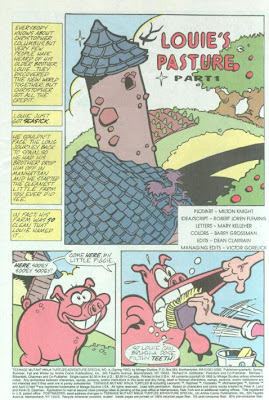 When Christopher Columbus sailed to the New World, he brought along his older brother, Louie. However, Louie didn’t feel up to the return trip and opted to stay behind in what-would-become-Manhattan. There, he began a farm that at some point got shifted to an alternate dimension (How? I guess that’s not important). Louie didn’t care, though, because keeping the farm sparkling clean kept him occupied; constantly brushing and moping and hosing down his livestock (much to their irritation). In fact, Louie was so busy with cleaning that he never noticed that every hundred years, his farm would return to Earth for exactly 24 hours in the exact place where it was built… what is now Times Square. 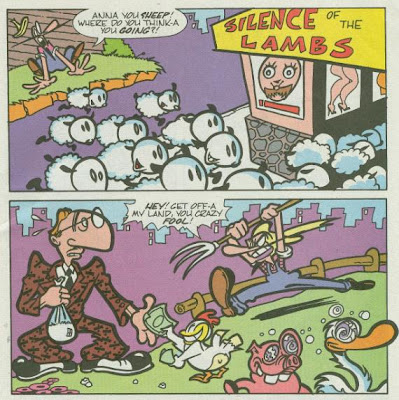 And that brings us to today. Louie’s pasture shifts back to Times Square and all the noise and commotion drives his animals crazy. As his cows give rides to prostitutes, his sheep check out “Silence of the Lambs” at the local cinema and his chickens buy bags of coke (you think I’m joking, but I’m not), Louie panics to collect them all. In his rush, he runs out into the middle of traffic, where he gets hit by a car and knocked down a manhole (landing right on the TMNT’s doorstep).

Meanwhile, Oxy (a muscle-bound, brain-dead oxen) and Kid (an egotistical, hyper-intelligent goat) decide they’ve had enough of Louie’s constant cleaning and want to live in filth. So they sneak out of the pasture and down into the subway tunnels. Unfortunately, the police don’t cotton to farm animals on the trains and the fuzz chases them into the sewers. Losing the cops but exhausted, Oxy and Kid stop for a drink of sewer water. As it happens, the water is laced with mutagen and Oxy becomes an even stronger, invulnerable anthropomorph named Oxymoron, while Kid becomes a genius-level telekinetic named Kid Cortex. The two animals then invade Central Park, intent on transforming it into a farm all their own, where all the animals are free to be as dirty as they want. 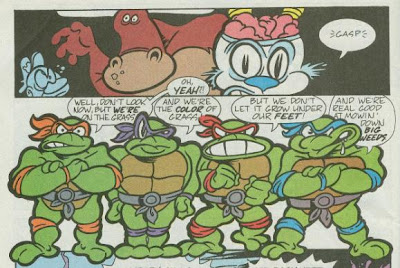 Back at the pasture, Louie explains the story to the Turtles. His 24 hours are almost up and he’s still missing two of his most beloved animals. The Turtles vow to help him locate his livestock, at least until they see a fleet of police cars racing to an emergency. Deciding that looks more exciting, they follow the cop cars to Central Park where Kid Cortex and Oxymoron are tearing up the place. The Turtles take the mutants on and the fight eventually leads to Central Park Zoo. Oxy frees the most vicious animals from their cages and Kid uses his telepathy to make them attack the Turtles. Battered, the Turtles retreat.

Returning to the pasture, they collect Louie to see if he can talk some sense into his wayward flock. However, Louie doesn’t want to leave his pasture unguarded, so a disgruntled Donatello remains behind to mind the farm. At Central Park, Louie begs Oxy and Kid to come home, reminding them of how he raised them from little babies. Moved to tears, Kid and Oxy agree to return to the pasture.

They’re too late, though, as the 24 hours expire and the pasture returns to another dimension for a hundred years; with Donatello along for the ride!

*The Turtles will travel back in time and meet Louie’s brother, Christopher, in TMNT Adventures #40.

I know this is going to sound strange coming from a guy who loathes the TMNT stories by the likes of Mark Martin and Hedden and McWeeney, but I really like Milton Knight’s stuff.

Normally, I don’t care for the zany, surreal, overly exaggerated TMNT stories that don’t feel like they could fit in any universe (Martin, Hedden and McWeeney produced my most despised issues of Mirage’s TMNT Vol. 1), but I think Milton Knight’s stuff fits in just fine with the universe of TMNT Adventures. While his visual style is pretty out there and exotic, the stories themselves are no more ridiculous than a lot of the earliest installments in the series, when the book still held a tone closer to the kooky stylings of the Fred Wolf cartoon.

Storywise, things move at a mile a minute and you’ll be done with this first half of the Special before you know it. Knight’s style is all about being fast and furious with the characters in a constant state of motion; no one can sit still for a moment. Knight brings a look that’s like a Fleischer Bros cartoon on crack, and while the manic squash-and-stretch visuals may nauseate some, I found them palatable because of the sense of humor he brings to each panel. Where Martin, Hedden and McWeeney’s similar take on cartooning irritates me, Knight’s execution makes me laugh. Go figure.

Knight also nails the Italian accent on Louie and his dialogue is just a whole lot of fun to read. The Turtles all act identically and they aren’t really the focus of the story, which might put you off (then again, this is only the first half of a full story). Still, I think what makes this TMNT Adventures Special so enjoyable is that it comes on the heels of the previous three, which were all about hammering home environmental or social lessons to the audience. TMNT Adventures Special #4 has no ulterior motives or educational agendas; it just wants to entertain. And after three issues of public service announcements, I think we all needed that.

Grade: B (as in, “But it only gets weirder in the next chapter, where the giant disembodied cows head shows up”.)