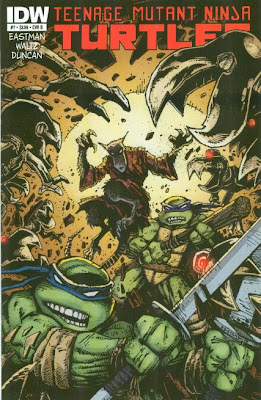 On the planet Neutrino, the armor-clad General Krang overlooks the devastation and inquires the number of his troops killed in action. Captain Tragg informs him that six Stone Soldiers died while only one Neutrino Resistance Fighter was felled in the battle. Krang doesn’t like those numbers and orders Sergeant Granitor to teleport them back to Burnow Island on Earth. Returning to his compound, Krang (now revealed to be a small brain-monster in a robot body) orders Lieutenant Pogue to prepare his plane, as he intends to pay a personal visit to Baxter Stockman in New York. 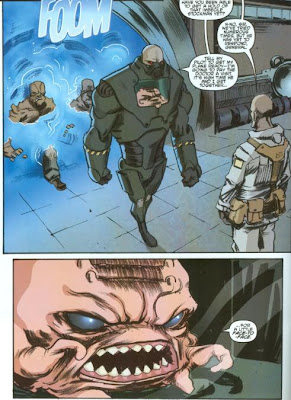 In the alley behind Rupert’s Pizzeria, Mike won’t stop telling Raph about how awesome his human buddy Woody Dirkins is. The guy works at the pizza place and Mike met him while he was scrounging through the dumpster for chow. Woody introduced him to fresh pizza and Mike has been obsessed with the stuff (and grateful to Woody) ever since. Mike introduces Woody to Raph and picks up his order, trading fist bumps and annoying lingo with his equally dorky friend. Raph rolls his eyes.

Down in the sewer lair, Don and Leo discuss the realities of Splinter’s story; that they are reincarnations of dead Japanese children. Leo is willing to take Splinter at his word, but Don cannot trust something so fantastic-sounding. At the very least, he plans to investigate the legend of Oroku Saki and see what he can dig up on the Foot Clan. Leo, though, has been having dreams of his mother, Tang Shen, though he isn’t sure what to make of them. Suddenly, a horde of Mousers invade the lair, attacking the Turtles and Splinter.

At the New York Tech University gym, Casey continues with April’s self-defense courses. Finishing up, April tells Casey it’s time to hit the books. As they leave the gym, a romance appears to blossom. 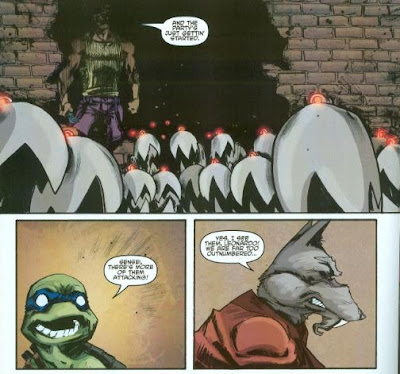 Down in the lair, Old Hob reveals himself to be at the controls of the Mousers and is enjoying making the Turtles and Splinter scurry for their lives. The Mousers are overwhelming, so Splinter tells his sons to retreat. Hob isn’t having that, though, and orders the Mousers to collapse the ceiling on his foes.

At Baxter’s posh apartment, he receives a surprise visit from General Krang and his Stone Soldiers. Krang is furious that a year has passed and he still has not received the super soldier mutagen or psychotropic drug that he commissioned Stockman to create for him (have supplied him with the necessary ooze components to get the work done). Stockman says that he’s fulfilled his end of the terrapin exo-armor experiment, citing the Stone Soldiers as proof of his success, then uses the break-in at his lab as an excuse for the delay. Krang refuses to accept any excuses, so Stockman assures him that he’s undertaking initiatives to retrieve the lost psychotropic drug as they speak… 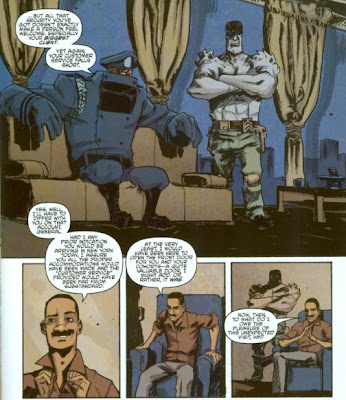 Down in the lair, Mike and Raph arrive just in the nick of time. Don and Splinter are down and Leo is standing alone against a horde of Mousers.

*Chronologically, this story is continued from Infestation 2: TMNT #2. The story continues in TMNT (IDW) #8.

*The Turtles met the savate ninja in TMNT (IDW) #6.

*Captain Tragg is obviously the same character as General Traag from the Fred Wolf TMNT cartoon, albeit reduced in rank (because Krang is a General in this universe) and also his name is misspelled.  To IDW's credit, they'll stick with the "Tragg" spelling even if it's a mistake.

*Burnow Island is named after editor Bobby Curnow, but you probably already figured that out.

*Woody Dirkins was inspired by Dirk Wood, IDW's head of marketing, in name, appearance and personality.

*Although it was published before TMNT Microseries: Donatello #3 and the 2-issue TMNT: Infestation II miniseries, this story takes place afterward, as confirmed by editor Bobby Curnow on the IDW and Technodrome forums. Regardless, this issue can still be read without those in-between stories and the audience won’t miss a beat.

*Details on the Neutrino Resistance will be revealed in TMNT Microseries #8: Fugitoid.

Alright, things have started to really heat up, really fast!

The opening of this issue was quite a surprise, as suddenly out of the blue, we’re on another planet and Krang is almost nonchalantly revealed to be a creature identical to his Fred Wolf incarnation. In fact, we’re just bludgeoned with an assault of Fred Wolf concepts within only the first couple of pages; Krang in a bald-headed android body, Tragg (sic), Granitor, the Neutrinos… It’s a lot to take in all at once, but I didn’t so much mind. I *like* the Fred Wolf concepts at their core and have often pined for a Turtle comic or cartoon that was willing to do more with them and explore them on levels the often-hokey Saturday morning cartoon never did.

I really dig Duncan’s redesign for Krang (which was leaked months and months ago when IDW made this issue’s A cover available online), as it incorporates much of his classic look while reducing the silliness inherent in it. His robot body is still insanely buff, bald and has the glowing red eyes, but now it’s clothed and we should all be grateful for that. Krang-himself, though, looks practically untouched on a visual-level, save some more fearsome elements that have been exaggerated on him.

With this Krang being a General and all, it makes sense that Tragg and Granitor would have their original ranks of General reduced to Captain and Sergeant. It was a pleasant surprise to see them show up and I dug how Waltz worked in the whole “terrapin exo-armor” as an explanation for the existence of Stone Soldiers. Likewise, I’m psyched to see what he digs out of the Krang/Neutrino conflict. We’d occasionally see glimpses of it in the Fred Wolf cartoon, but it was usually a background concept while sillier plots took the spotlight (like the Turtles looking after a Neutrino baby while the King rallies the troops to fend off Krang’s forces).

As for Woody Dirkins… I have no idea what to make about that. The issue makes a big production out of introducing him, so I can only presume Waltz has major plans for the guy down the line as a supporting character. It *is* nice to know, though, that other Turtles have human friends they see regularly beyond Casey and April (in most continuities) and it makes sense that the overly friendly Mike would be one of the first to make them. Woody’s intro also serves as an explanation for Mike’s pizza obsession, which was another Fred Wolf concept I wasn’t anticipating encountering. As for Mike's behavior in this issue, well, he had his obnoxious-factor cranked up to 11 and I hope that isn't a trait that remains consistent. I understand that, being only 15 months old, video games and pizza are some new and wondrous thing that he can't get enough of... but do we have to keep hearing about it?

As for the Mousers, well, they’re the Mousers. They may be the one constant of every TMNT universe that have never undergone any significant change. And why would they? They’re little toothy robots that the Turtles smash; don’t go reinventing the toaster, guys. We didn’t get to see any of the unique-looking Mousers from the end of #6, but maybe they’ll show up next time.

Anyway, all at once, this series has just taken off with its story and that’s something I’ve been waiting a long time for. The abundance of Fred Wolf-isms may turn away the Mirage-devotees, but anyone who grew up with the 80s cartoon and can still enjoy its ideas and characters on some level should get a kick out of the fresh start they’re getting. This was a very exciting issue and I hope the pace keeps up.

Grade: B+ (as in, “But if Waltz turns Woody into this universe’s incarnation of Pizzaface, I will explode from the eruption of pure, concentrated joy”.)
Posted by TMNT Entity at 8:56 PM