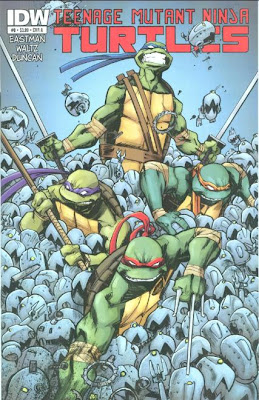 Down in the sewer lair, Leo implores Raph and Mikey to join him in fending off the killer Mousers, as Don and Splinter are down for the count. Raph joins with Leo as Mikey rousts Don. Recovering, Don jumps back into battle, leaving Mikey to try and get Splinter’s unconscious body to safety. From behind a pile of debris, Old Hob waits for his chance to pounce. 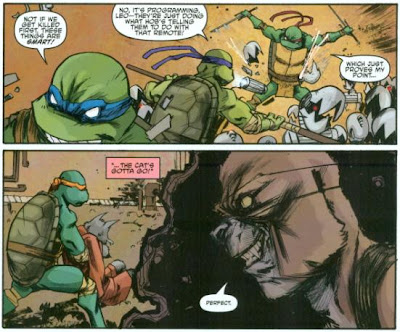 In his apartment on the Upper West Side, Baxter Stockman entertains General Krang. He explains that Hob should be back soon with the rat, who contains the mutagen and psychotropic drug samples they need. Unfortunately, Hob and the mutated turtles cannot have their sample extracted, as they absorbed a tainted batch; only the rat can be used, as his dosage was carefully injected and monitored (however, he admits the Turtles might be useful if captured). Baxter also fears that the rival ninja organization that raided the lab has found a means to perfect the psychological instability problems that come with the tainted mutagen they stole, as he’s heard reports of a mutant fox-woman running around that is in her right mind.

Krang decides he’s had enough of Baxter’s prattling and lays down the law. Firstly, the ninja organization are a meaningless distraction and not even on his radar as a genuine threat to his mission of global conquest. Secondly, his enemies on Neutrino are the only ones with certain technical knowledge he needs, but as they’re rebelling, he has no choice but to deal with Stockman in the meantime. And finally, he leaves Stockman with a very grim warning: Get the sample back very soon, or die. 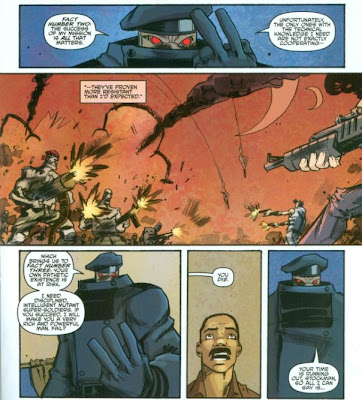 Down in the sewer, Hob succeeds in overwhelming Mikey with more Mousers and makes off with Splinter in a smokescreen. As he leaves, though, he fails to notice that he’s dropped his Mouser remote.

At a donut shop, Casey and April trade life stories. Casey explains about his mom dying and his dad being a no-good drunk. April explains that her dad recently had a stroke, but her parents didn’t want her to come home and take care of him, as her scholarship was too important. Casey asks April why she needs self defense lessons and April tells him about the ninja break-in at Stockgen. When she mentions a rat named “Splinter”, Casey realizes April may need to see something.

Down in the sewer, the Mousers are on autopilot and they’re still trashing the Turtles. Don realizes that the Mousers are operating via a form of radar honed in on their specific shapes. Don tells his brothers to get in a single file line behind him so as to hide their numbers (like the Sand People from “Star Wars”!) and hope to confuse them.

In an alley, April parks her Volkswagen and Casey tells her that there’s something in the sewers she has to see. Being a genius, April follows him. 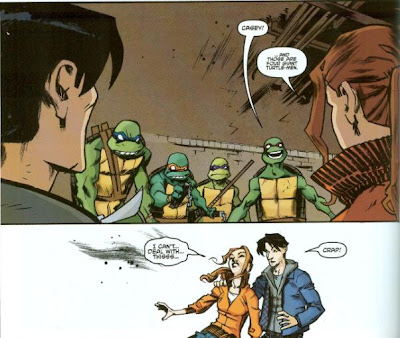 And in those very sewers, Don's plan works like a charm. The Mousers hone in on a single Turtle and are unprepared when three pop out of “nowhere”. The Turtles waste the last of the Mousers and Don finds Hob’s remote. Leo orders his brothers to split up and search for Hob and Splinter just as Casey arrives to introduce them to April. April summarily faints. Casey tells Raph that April knew them when they were regular turtles, but there isn’t any time for that now, as the Turtles hit the streets. Overlooking the carnage, Casey knows April is gonna be ticked when she comes to.

*This story is continued from TMNT (IDW) #7. The story continues in TMNT Microseries #4: Leonardo.

*April’s encounter with the ninja at Stockgen happened in TMNT (IDW) #2.

*April’s declaration of “I can’t deal with this” while fainting is, of course, a reference to the first episode of the Fred Wolf cartoon, "Turtle Tracks".

While all the threads aren’t even close to being sewn up, we get to see lots of build up and a few lingering questions finally resolved with this installment.

Finally, we know why Baxter didn’t just wring the mutagen from Hob when he showed up at Stockgen. Finally, April does her faint-take. Finally, Krang stops mollycoddling Baxter. Finally, Old Hob does something competent. Finally, we get some further info on the “mystery ninja organization” and what the deal with Alopex was. Finally, we get to see a glimpse of a Neutrino and he has a pompadour!

Okay, maybe I’m the only person who thought that last one was awesome. Sorry.

The slow burn take isn’t always to my liking, but I’ll concede that it is a VERY suspenseful technique; so when the threads finally start to coalesce and we get to the pay-off, it feels oh-so good. It’s clear that Eastman and Waltz have plotted out a true Turtle epic and I’ve loved seeing all things unfold a month at a time. The microseries issues are also starting to be recognized in the ongoing and the tapestry is becoming all the richer. If you sit down and read the ongoing, microseries and Infestation mini in proper chronological order, the entire narrative flows smoothly and you can appreciate the amount of forward thinking that went into building this TMNT universe from the ground up.

There was a line in this issue that got me curious, too; that the mutagen that Hob and the Turtles absorbed was tainted and thus will eventually lead to mental instability (as is already evident in Hob). What does this mean for the Turtles? Are they gonna go nutso? Are their various eccentricities and quirks a part of that mental instability? And what’s the “cure”, if there even is one? So old threads are being tied up and new ones are being let loose. Good stuff.

Duncan’s art continues to improve with each issue and he really shows off his stuff in this action-heavy installment. I didn’t care for a few of his Turtle expressions, particularly the splash on page 4; Mikey looks like he should be enthusiastically shouting “AWWWW YEEEAAAHHH!” rather than “GAH!” as Mousers tear into him. He’s still got one of the best takes on April, though; she’s cute without being over-the-top sexy. Basically, she looks like the kind of girl you'd see on a college campus, which is very fitting.

Overall, though this is a highly serialized comic, TMNT #7 and TMNT #8 felt like more of a “two-parter” than anything else. As its own kinda-sorta story arc, I felt it really paid off on what we’ve been waiting for since the book started and if you’ve stuck with it these past eight months, then you’ve been rewarded.