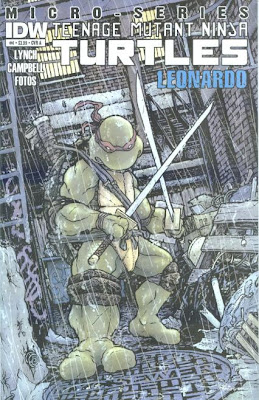 Old Hob has kidnapped Splinter. Leonardo orders his brothers to split up and scour the city in search of their father. Leo decides to start his search at Stockgen labs and see what he can dig up. Crossing a construction site, he’s suddenly attacked by a swarm of Foot Soldiers. Recognizing them, Leo defends himself and tries to force answers from the ninja. As he battles, Leo is struck by brief glimpses back to his life as a human child in Feudal Japan, particularly of his mother, Tang Shen. 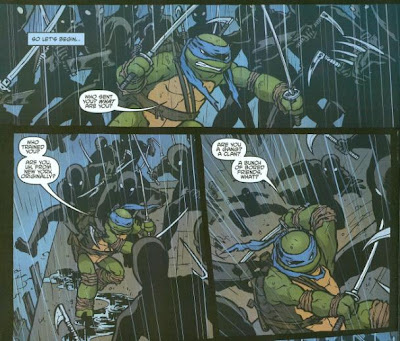 The numbers grow out of hand and Leo decides to lure the Foot Soldiers into a boarded up building and whittle them down from there. The plan works until an unexpected variable, a homeless woman, shows up on the scene. Distracted by the woman, as he doesn’t want the Foot Soldiers to kill her, Leo gets bogged down by enemies. A sudden memory of his mother’s death at the hands of the Foot Clan revives his strength and he fights his way free. Collapsing a portion of the ceiling, he drives the Foot Soldiers into retreat and allows the homeless woman to escape. 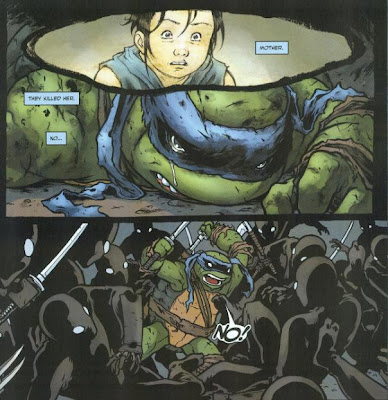 Leo races to the rooftop in the pouring rain and is approached by a single Foot Soldier: a scar-faced man with arm gauntlets. Leo takes the Foot Soldier on in a one-on-one battle, but despite his best efforts, cannot best the ninja. Telling Leo that he’s unimpressed, the scar-faced Foot Soldier hurls the Turtle off the roof and into a dumpster. 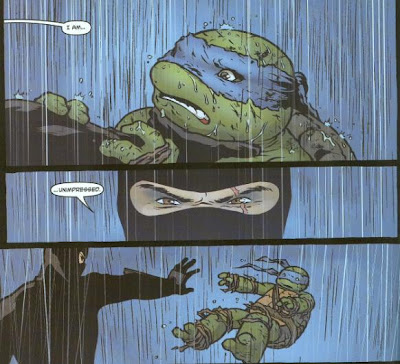 Later, Leo returns to the lair to reconvene with his brothers, Casey and April. Leo tells them what has happened (save his humiliating defeat) and his brothers ponder just how many factions out there want them dead. Mikey asks what they do next and Leo simply tells them that they keep on fighting, as he will never allow another family member to be lost ever again.

*According to editor Bobby Curnow, the Foot Soldier seen at the end of TMNT Micro-Series: Raphael #1 was not intended to be the same character as the scar-faced Foot Soldier seen in this issue. However, his identity can be interpretted as such by readers without affecting the storyline.

*The reason the scar-faced ninja chose to test Leonardo will be revealed in TMNT (IDW) #14.

*This story was originally published with 5 variant covers: Cover A by David Peterson, Cover B by Campbell, Cover RI-A sketch variant by Peterson, Cover RI-B reprint of original Leonardo (microseries) #1 cover by Peter Laird, and Cover RE by Matt Slay.

This issue was all action. Not that that’s a bad thing.

TMNT Microseries #4: Leonardo makes an effort to recapture the running Leo vs. Foot battle of the original Leonardo (microseries) #1, but I think it’s best not to actively compare the two stories. A few years back, I ranked the original Leo/Foot battle as the greatest TMNT moment of all time and it is, perhaps, the greatest single issue of TMNT published by Mirage. So trying to compare this new issue with the original is somewhat unfair, and really, it’s more respectful to judge this story on its own merits and not as a side-by-side with a previous tale.

Picking up exactly where TMNT (IDW) #8 left off, this issue gives us something we’ve been waiting quite a long while for: the Turtles fighting the Foot. Or a Turtle fighting the Foot, anyway. We don’t get many answers to any questions from the ongoing series in this installment, as it’s really just a running battle for twenty pages, but that isn’t to say the story is necessarily shallow, either.

The idea that Leo is the only one of his brothers to have any real memory of their past life makes a lot of sense; he was the oldest, after all. And for those still unsure about the new origin, I think stories like this prove that the reincarnation angle adds a lot of heart to the mythology. Leo’s flashbacks of Tang Shen can be rather heartbreaking, as he recalls her bathing him, tucking him in and finally dying at the hands of the Foot. That last part, in particular, helps to fuel his emotions during the battle and it’s a struggle for him to keep from going over the edge. While I said that this issue was all action, there’s some heavy back story woven in-between said action that lend it some considerable weight.

As a first encounter with the Foot, it both delivers and, I’m afraid, falls short of my expectations. Early on, Leo remarks that the Foot Soldiers aren’t good enough to beat him and he breezes through them rather handily. They begin to overpower him through sheer numbers, but he overcomes that in the end, too. This only succeeds in making the Foot Soldiers look like a bunch of chumps. And while it’s perfectly natural for the Foot to become that in later stories, as the Turtles improve their skills, I’m of the opinion that making them ineffective fodder right out of the gate only serves to diminish their threat level. Even the 4Kids cartoon made it a point in its first episode to show that the Foot were quite skilled and hard to keep down (though naturally they became cardboard targets by later episodes, but back to my point; they shouldn’t be cardboard targets from the get-go).

Of course, that sort of changes at the climax, as the familiar scar-faced Foot Soldier slaps Leo around like it ain’t no thang and quite literally tosses him in the garbage. I think we all have a pretty good idea of who scar-face is going to turn out to be, and while the fight scene does a great job of further establishing his threat-level and personality, it still doesn’t make up for how easily Leo punked all the other Foot Soldiers on their first encounter.

Now, I have one particular problem with the running battle seen in this issue and it isn’t a matter of art or storytelling, but the fact that at no point does Leo ever draw blood. In fact, we never see his blade connecting with any body part. So the question remains: Just how did he beat all those Foot Soldiers if he didn’t stab a single one of them? Did he hit them all in the head with the handle of his katana? We see the blade tear fabric, but again, we see no evidence of damage. There’s a panel where he’s swinging his katana in a circular tornado motion and the surrounding Foot Soldiers all fall backward, but again, no slash marks. It just looks like he’s blowing them away with a shockwave, not cutting them.

IDW has stated that the Turtles have a “no kill” policy, at least at the moment, and while I understand their reasoning for this (when they actually DO end up taking a life in this series, it’ll carry a major impact), the setbacks of that policy can clearly be seen in the logistics of this battle. Leo beats an entire unit of Foot Soldiers single-handedly without killing a single one and, by all visual evidence, not even giving them a scraped knee. Once again, this goes back to my earlier critique: These Foot Soldiers must really, really SUCK.

Ross Campbell struts his stuff on art duties this issue and I’ve been a follower of his for a while. He’s posted quite a bit of TMNT fan art over the years and I imagine that acted as his portfolio to IDW to get this gig. Couldn’t have happened to a better artist, honestly, as he really knocks this one out of the park. He takes a different approach to drawing certain features of the Turtles than many other artists; my favorite of which are the smaller eyes and the thicker bandanas. Lots of artists like to give the Turtles these huge saucers for eyes and have the bandanas conform to a cartoonish brow, and while that approach certainly offers lively expressions, it’s still kind of goofy. Campbell’s Turtles have this menacing look that I really dig and I love that the bandanas look like actually big ole strips of fabric tied around their eyes instead of colorful paint applied in a ring around their noggins. His inking, which is heavy on the shadow, is also mighty attractive.

At a few points I felt that he didn’t really convey a strong enough sense of motion, at least when it came to swinging weapons and how they impact. The first panel on page 4 where the Foot Soldier and Leo cross swords looks a little clumsy, as does the later scene where Leo is on the ground with his head tucked in his shell and a nunchaku is supposed to be flogging him while it mostly just looks like its resting on his skull. In that regard, I think Campbell might have been better off employing some more exaggerated motion/speed lines or blur/smear effects to get the sensation of a fast-moving object across to the audience. Not a deal-breaker by any stretch, but just my observation of the art.

In conclusion, I really dug Campbell’s art and Lynch’s script did some great work in making the audience understand how much emotional power the reincarnation angle brings to the table. And the showdown with “scar-face” was pretty great. Unfortunately, the lack of, well, violence actually brings the whole thing down. Not because I’m some juvenile sadist that wants to see nothing but blood and guts, but because the idea of Leo defeating a massive swarm of Foot Soldiers without inflicting any physical damage just takes me right out of the experience. And, well, it makes the Foot Soldiers look like a bunch of jokes, which is NOT the best way to introduce them.

That aside, it was still a fast and furious issue with plenty of good stuff to offer.

Grade: C+ (as in, “Campbell once drew ‘Critters’ fan art. Movie-Raphael probably doesn’t approve, but I sure do”.)